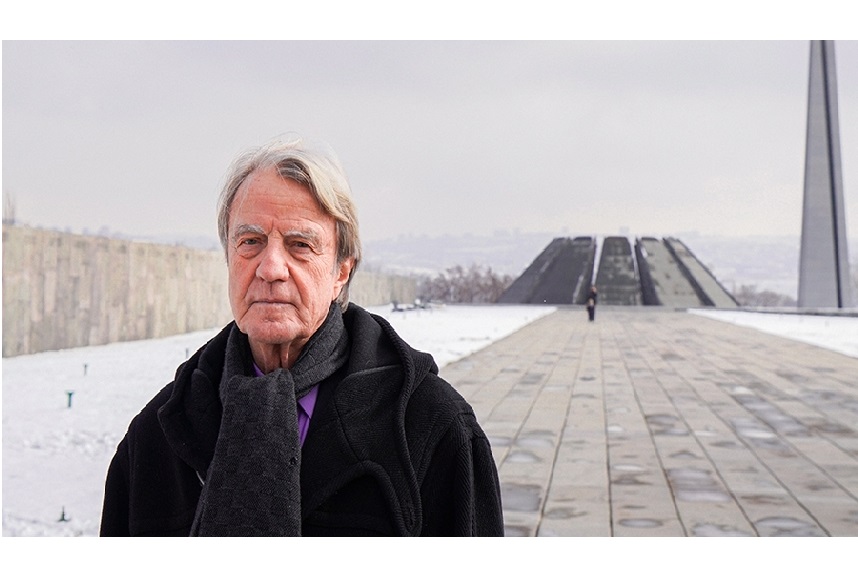 (Armradio)- Internationally renowned humanitarian and physician Bernard Kouchner has arrived to Armenia at the invitation of the Aurora Humanitarian Initiative that continues to bring the world humanitarian leaders to Armenia and Artsakh, exploring new opportunities to help the local population and to support Artsakh’s international standing.

Mr. Kouchner, co-founder of Médecins Sans Frontières, former French Foreign Minister and member of the Aurora Prize Selection Committee, is accompanied by humanitarians Alain Boinet, Founder of Solidarités International, and Patrice Franceschi, former Chairman of the Société des Explorateurs Français. Together, they will have a chance to take a closer look at the regional humanitarian projects supported by Aurora and focused on promoting micro and small enterprises, restoring infrastructure, and boosting economy.

After arriving to Armenia, Mr. Kouchner went to the Genocide Memorial Complex to honor the victims of the Armenian Genocide and had an opportunity to pay respect to the doctors who volunteered in Artsakh during the war. The next day, the delegation went to Artsakh to show their solidarity and support local humanitarian efforts, including those assisted by the Aurora Humanitarian Initiative.

In Stepanakert, Mr. Kouchner and others visited the Lady Cox Rehabilitation Center to meet with wounded soldiers in treatment. Aurora supports the infrastructure improvement of the Center within the framework of the Initiative’s aid program for Artsakh, focused on assisting projects that facilitate the region’s long-term social development. The Aurora Humanitarian Initiative has already allocated a total of $581,740 (300,660,500֏) to aid fifty-seven local and international projects implemented by its numerous partners.

“I’m grateful for the opportunity to come to Armenia and Artsakh and show my solidarity to those affected by the war. I was impressed by the philosophy of the Lady Cox Center to integrate the whole family and environment in the therapeutic process. The whole place had a quiet and positive atmosphere, and I am happy that Aurora supports this institution that is so much needed in Artsakh,” Dr. Kouchner said after the visit.

On February 24, Mr. Kouchner’s delegation toured the areas of Stepanakert that had been most affected by the war and talked to the representatives of the projects assisted by Aurora, including The HALO Trust’s operation to clear cluster munitions and other explosives in civilian areas to allow the safe return of displaced people to Artsakh.

“People [here] know very well that their existence depends, first of all, on a secured environment, and we understand now how important it is to create the proper structure for their health to respond to the needs of this strong and courageous population,” Mr. Boinet remarked upon leaving the Stepanakert Republican Hospital.

On their way to Yerevan, Mr. Kouchner and his group will travel to Dilijan to tour the UWC Dilijan school and town. On Friday, before concluding his visit, Bernard Kouchner plans to take part in a moderated discussion at the Yerevan State Medical University and to go to the Matenadaran, Armenia’s national repository of ancient manuscripts supported by Aurora Grants.

Microsoft Adds Armenian To Its Translator