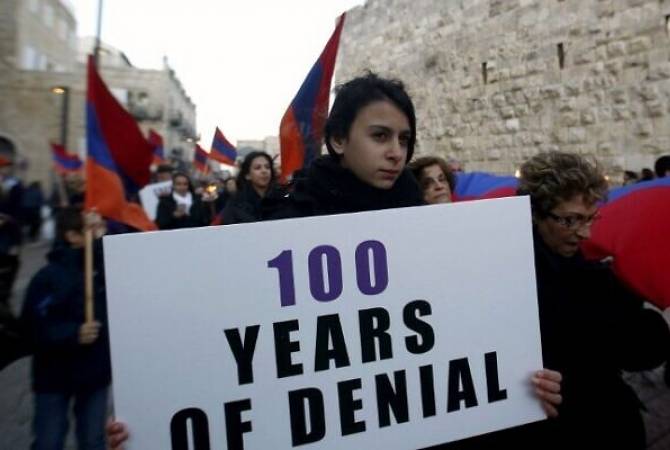 “The US House of Representatives vote to recognize the Armenian Genocide is a vote for historical truth and justice. Turkey cannot be allowed to intimidate the world into denying genocide. I will continue to fight for Israeli recognition of the Armenian Genocide,” tweeted lawmaker Yair Lapid, the co-leader of the Blue and White political alliance of Israel.

Earlier in April Lapid was strongly advocating for a Knesset bill recognizing the Armenian Genocide, which however failed to pass.

Citing what he called Israel’s “moral and historical responsibility,” he tweeted in April that it was time for the government “to officially recognize the Armenian genocide and stop folding in the face of Turkish pressure.”

Ex- Likud minister MK Gideon Sa’ar also called for recognition, tweeting on Wednesday that he “welcome[d] the moral and principled stance of the US House of Representatives in recognizing the mass killing of #Armenians 100 years ago as #genocide. Israel should make similarly clear its recognition of this terrible atrocity.”

The Times of Israel notes that there are individual lawmakers in the Knesset who support recognition.

“The issue of recognition of the Armenian genocide is raised every year in the Knesset, usually in the form of proposed legislation rather than a call for a debate, and has been knocked down by sitting governments annually since 1989, when MK Yair Tzaban first brought it to the floor. Israel’s refusal thus far to formally recognize the Armenian slaughter as genocide is based on geopolitical and strategic considerations, primary among them its relations with Turkey”, the Times of Israel wrote.

The Armenian foreign ministry welcomed the US House passage of the resolution, which “is of profound significance in that it resolves to commemorate the Armenian Genocide through official recognition and remembrance, to reject its denial and encourage the education and understanding of the killing of 1.5 million Armenians by the Ottoman Empire from 1915 to 1923 as a definitive example of genocide of the 20th century”.

Shortly after the US House of Representatives adopted the resolution, Turkey strongly criticized the move, and President Erdogan declared that the Turkish parliament will respond to the vote.

Ankara also summoned the US ambassador over the adoption of the resolution.