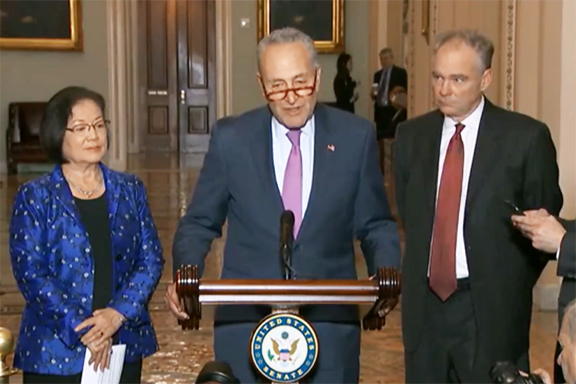 (Asbarez)-A day after the U.S. House of Representatives overwhelmingly adopted a resolution recognizing the Armenian Genocide, leading U.S. senators urged the passage of a similar bill—S.Res. 150—pending in the Senate.

Senate Minority Leader Chuch Schumer (D-NY) on Wednesday called for the immediate consideration and passage of an Armenian Genocide recognition resolution pending in the Senate.

“On the Armenian Genocide, I have been a believer of this for a long time: Turks don’t like to hear it because the truth hurts. And, if we don’t stand up to one genocide, we won’t stand up to any,” told reporters on Wednesday in discussing Tuesday’s vote.

Democratic presidential hopeful and senator from Massachusetts Elizabeth Warren took to Twitter to say: “I join the Armenian American community in MA and the rest of the Armenian diaspora in celebrating the House passage of a resolution recognizing the Armenian Genocide. I cosponsored S.Res.150 to recognize this tragedy. The Senate should pass it now”.

Maryland Senator Chris Van Hollen similarly called for the passage of S.Res. 150, saying on Twitter that “Last night’s overwhelming vote in the House of Representatives—405 to 11—to recognize the genocide of 1.5 million Armenians by the Ottoman Empire is long overdue. It’s time for the Senate to do the same. Acknowledging history is the first step towards not repeating it.”

“As we near the anniversary of Armenian Remembrance Day, one of the darkest events in human history, I am proud to lead this effort to formally recognize the Armenian Genocide on behalf of the U.S. Congress. The Armenian genocide is a historical fact and not up for debate,” said Senator Menendez at the time. “Only by accurately recognizing this genocide of the past can we ever hope to move forward in a legitimate and effective manner to meet the challenge of preventing mass atrocities and genocide in the future. With this resolution, we honor the millions of victims of this genocide, remember how they died and pledge that history accurately remember their deaths.”

“We must never be silent in response to atrocities. Over one hundred years ago, the world was silent as the Armenian people suffered a horrific genocide, and today many are still unaware of it,” said Senator Cruz at the time. “I am proud to join Sen. Menendez and my colleagues today in introducing this resolution. May the terrors of those events awaken in us the courage to always stand for freedom against evil.”