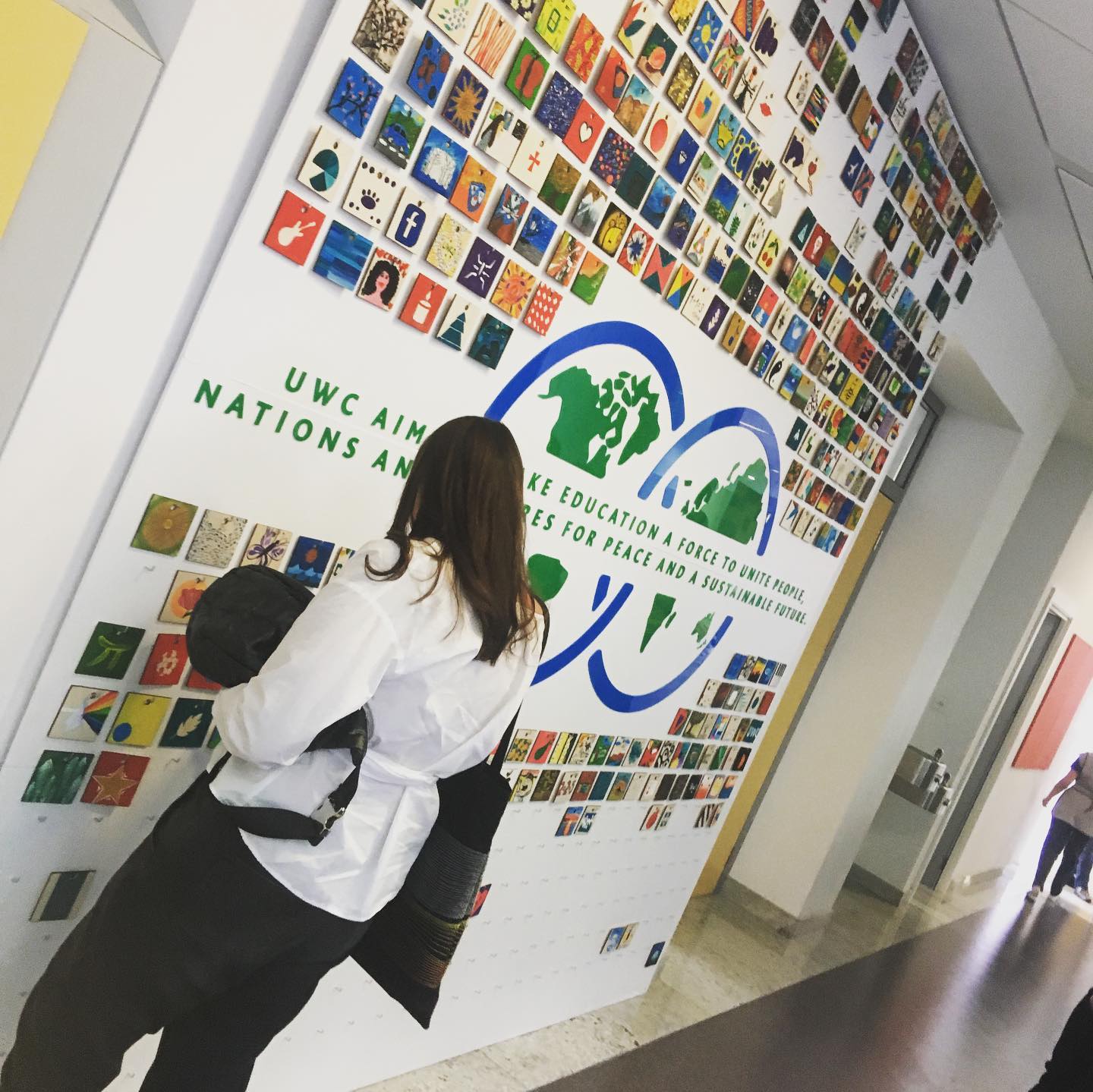 Wish wall created by UWC Dilijan students to mark the 5th anniversary of the college.

As part of the Aurora Forum 2019, Dilijan hosted the humanitarianism in education conference and celebrated its 5th anniversary on October 18 through a number of engaging activities in various locations on campus at UWC Dilijan College. Events of the day included the Young Aurora prize award, Aurora Dialogues on the role of education shaping socially responsible individuals, a fair of the local community projects and handcrafts, and a celebratory concert organized by UWC Dilijan students and staff.

Upon arrival, UWC Dilijan international students welcomed guests in their traditional dress and distributed individual pieces of hand-painted artwork to write on and place them on the wish wall. Guests were then directed to the sports hall where the conference commenced with opening remarks by the head of UWC Dilijan, Gabriel Adad Fernández who emphasized that education should be a means to positive action, otherwise “knowledge on its own is absolutely worthless.” Noubar Afeyan, co-founder of Aurora Humanitarian Initiative recalled, that education “exposed me to this notion of morality and ethics…of possibility and responsibility” and that it is critical to expose students early on to the individual aspect of making a difference.” The students of Dilijan also had a voice in promoting educational impact, as they enthusiastically shouted out the UWC mission to “make education a force to unite people, nations and cultures for peace and a sustainable future”.

United World Colleges (UWC) is a global network of 18 boarding schools and colleges with students between 16-19 years of age that come from a diverse range of socio-economic, religious, national, ethnic and cultural backgrounds. Students live together and study the International Baccalaureate Diploma Programme (IBDP) aimed to transfer skills to and foster students to become agents of constructive change through empathy and social responsibility.

Introduced just three years ago, Young Aurora, a partnership between the Aurora Humanitarian Initiative, United World Colleges (UWC), Scholae Mundi and Teach For All, aimed to encourage, support, and shine light onto student-driven projects addressing humanitarian issues and offering solutions through innovative and sustainable approaches. Every year the winning team is given a $4000 grant to further develop their project. The three finalists of Young Aurora 2019 presented their projects with great passion and professionalism. All three initiatives tackled very different issues within their communities.

The lack of civic engagement among young people in Wales has led to a rise of societal issues, including a deepening inequality, social exclusion and a culture of blame. In response to these findings, UWC Atlantic (United Kingdom) students, Rosemary (from China) and Blanca (from Finland) co-led Young Voices, a peer-led civic education program for 13-18 year-olds aimed to help other young people become engaged and compassionate citizens of tomorrow, while also closing the gap between the civic awareness of teenagers from different socioeconomic backgrounds.

Rosemary noted a sense of disillusionment toward politics and civic life as “politicians aren’t really looking at the young electorate right now, there’s a lot of endorsement to focus on the older electorate because they know it’s a more easily winnable voting block.” The context of family discussions about social and political issues, habits of voting, and civic engagement also play an integral role in empowering and shaping the perspective of young minds. With the help of their school mates and UWC Atlantic alumni, Young Voices has become a weekly service for schools in diverse areas. Upon discussing the impact of educational experience, Blanca wished that all schools followed the UWC model. The diversity of the school helped her to “confront my views and question my role in the world”, and as a tight-knit community and strong connections with the alumni “it’s hard not to get inspired.”

Smokeless Kitchens, (UWC East Africa -Tanzania) is a project initiated by three students: Nikoli, from US but a long-time inhabitant of Tanzania, and native Tanzanians Yahaya and Kelvin. These students created environmentally friendly smokeless stoves for households in the nearby indigenous communities of Chaga and Maasai in response to a frequency of cases with respiratory diseases caused by smoke inhalation due to conventional, poorly ventilated kitchen stoves. The impact of this project would produce health and social benefits by reducing chronic respiratory diseases, and allowing women to have more time to generate income rather than dedicating most of their day to collecting firewood.

The students shared the many challenges they faced in gathering enough manpower to materialize the project, making sure of its sustainability, and especially convincing and educating communities the need to change their traditional ways of cooking. Yahaya, who was diagnosed with a respiratory disease himself at a very young age, shared one such experience “where we built a smokeless stove for a family, then after a while she went back to her traditional ways of cooking.” These obstacles have not affected their determination and commitment to creating an impact, in fact Nikoli, Yahaya and Kelvin wish to see this project further expand by using an eco brick, which would reduce the rate of charcoal production – one of the biggest environmental problems faced by Tanzania today. Despite any challenges that may come, Nikoli embraces his experience at UWC which has instilled the idea that “no matter how small of an entity you are, you’re still capable of making a difference and that’s valuable.”

The idea to start Precious Plastic was inspired during a beach clean-up for a Marine Science class by students at UWC Pearson College (Canada). Switzerland born Antoine and Eden from Canada were both overwhelmed by the overuse of plastics, poor recycling habits and disheartened by the lack of action taking place in their community. Determined to find a solution, Antoine and Eden came across an already existing organization called Precious Plastic, a global community of hundreds of people working to end plastic pollution. The team planned to initiate regular beach clean-ups, but the long-term plan was to build a small plastic recycling factory on campus that would be maintained by the students and sell the materials it produced, such as phone cases, glitter, and other multi-purpose products, to help further fund the project. The precious plastic team expressed how UWC awakened their sense of responsibility:

“We could not live with the UWC mission of creating a more sustainable future while knowing that tonnes of plastic were habitually being thrown out at our College. Even if our project can not solve the wider issue of plastic waste, we truly believe it can bring Pearson a step closer towards our ultimate goal of a sustainable future and we would be so proud if Pearson could also set an example for other schools and colleges in this regard.” After anxiously waiting, the committee announced Smokeless Kitchens as the winning team who received a $4000 grant toward their project development. Impressed with the remaining finalists, the judges also rewarded $2000 each to Young Voices and Precious Plastic.

Umra Omar, founder of Safari Doctors and member of the Young Aurora pre-selection panel declared that, “It is platforms like the Young Aurora initiative that ignite the budding lights for change. This is an investment in the generation that is learning, both from the damage that we have caused and the potential of the humanitarian spirit to overcome this damage. These three impressive projects have chosen to improve our world for future generations. I could not be more proud to call these young changemakers my fellow UWCers!”