Life In Artsakh During The War 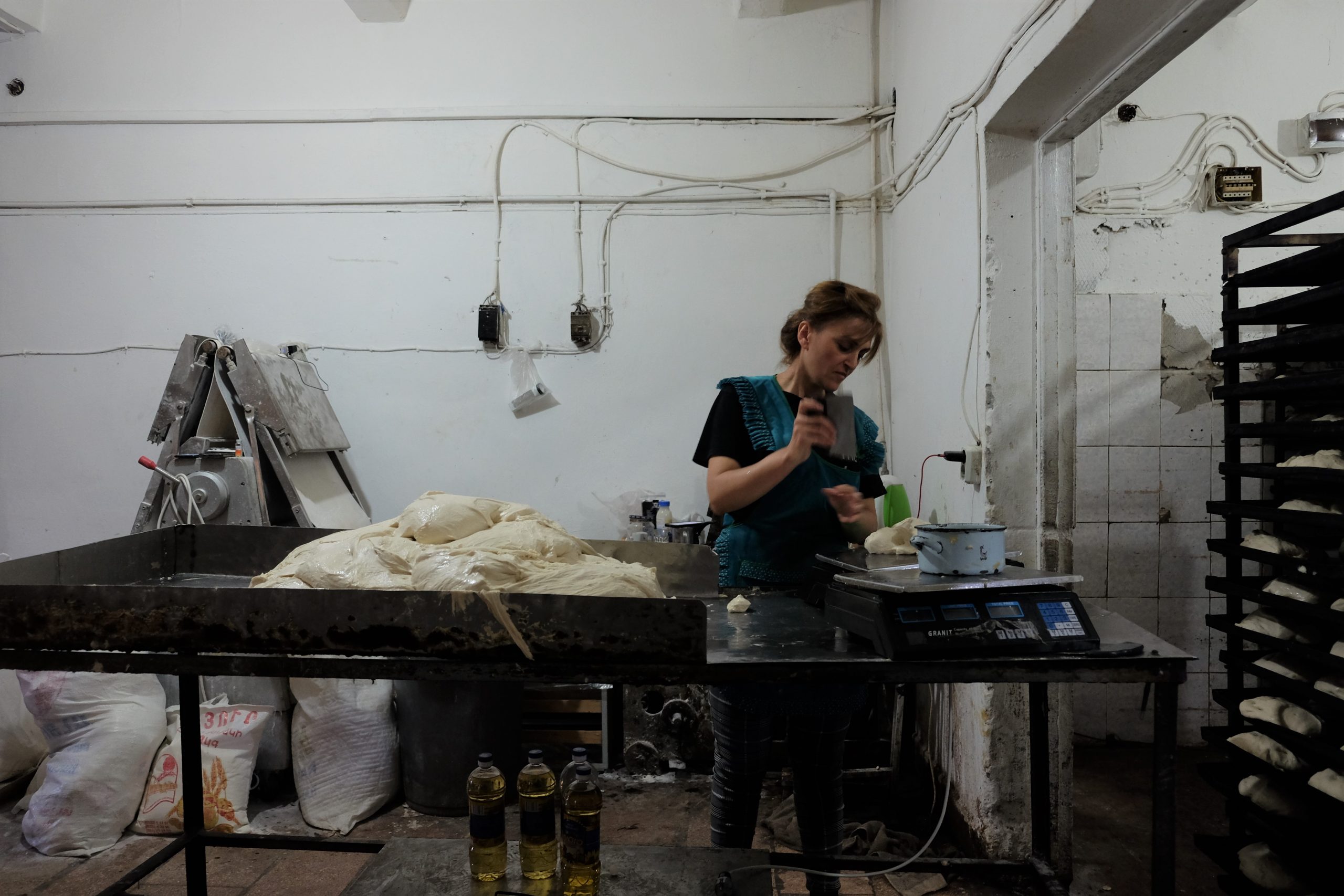 A bakery in Stepanakert, October 2020

“We are not going to leave Artsakh. This is our home, where should we go? Our sons serve, we must stay here to be worthy of them.”

Photos and text by Lika Zakaryan

(STEPANAKERT)- Since September 27, Azerbaijan has been shelling and attacking not only the entire line of contact along Artsakh and Azerbaijan, but also peaceful settlements within Artsakh. From the very first day, even the capital Stepanakert was targeted. The population of Artsakh has already gone through such a catastrophe once, in 1991-94. For some, it is the third war after the 4 Day War in April 2016.

There is a member from almost every Artsakh family on the front line. Men are on the battlefield. Tigran (pictured below) joined a group of volunteers from the first days of the war to defend his home. His father is also in the military, fighting shoulder to shoulder for the right to live freely. 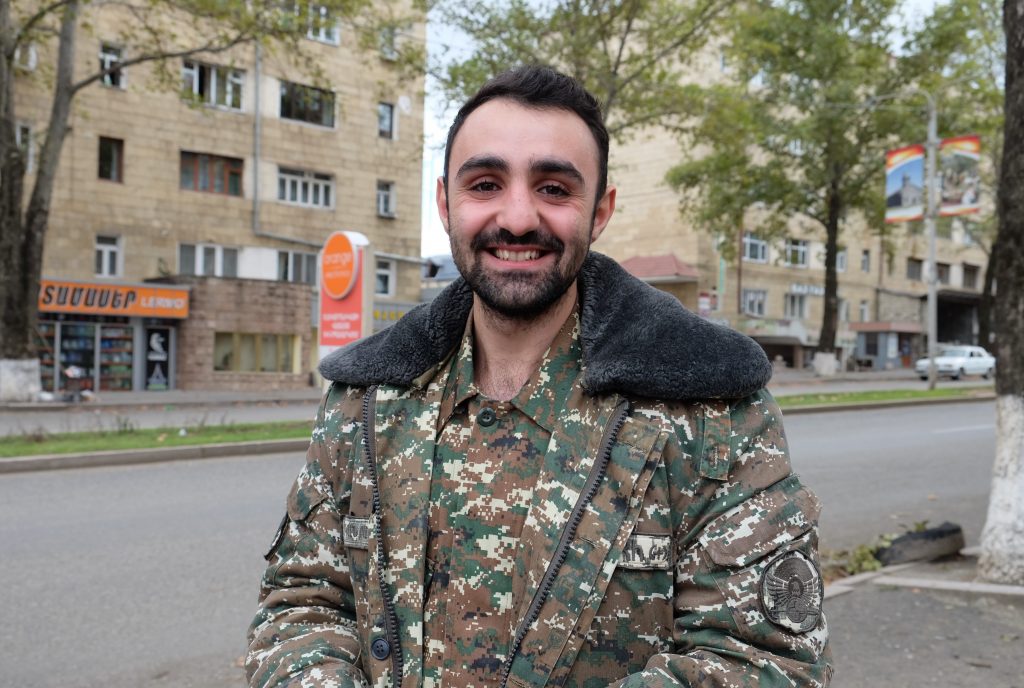 There are almost no open shops or pharmacies in major cities. The people mainly live on humanitarian aid – food, medicine, hygienic items- that they receive from different places, reaching Artsakh via Yerevan. The aid is organized and distributed by relevant infrastructure together with volunteers. Sometimes, volunteers themselves dispatch these items to people’s houses, so they don’t have to go out of their shelters. Many Armenians from the diaspora also provide these activities, along with financial support. 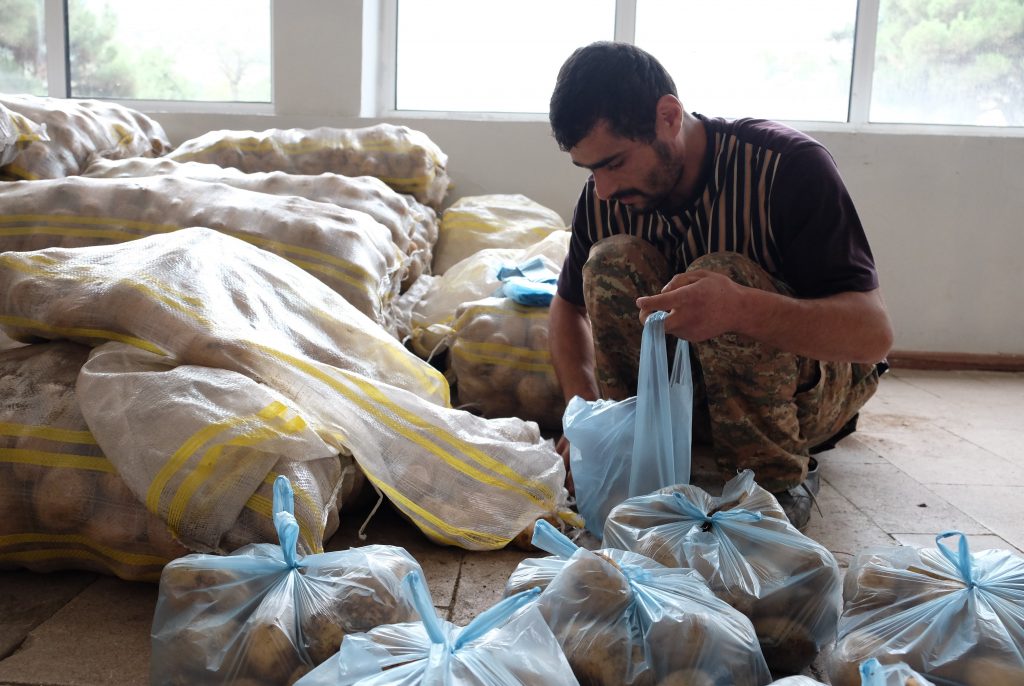 A volunteer in Hadrout, September, 2020

There are special bakeries, from where people can get bread and lavash for free. Flour and other essentials are mainly provided to people who work for free and provide the population with bread. Many of them ask for nothing – even refuse to get paid for the necessary ingredients. 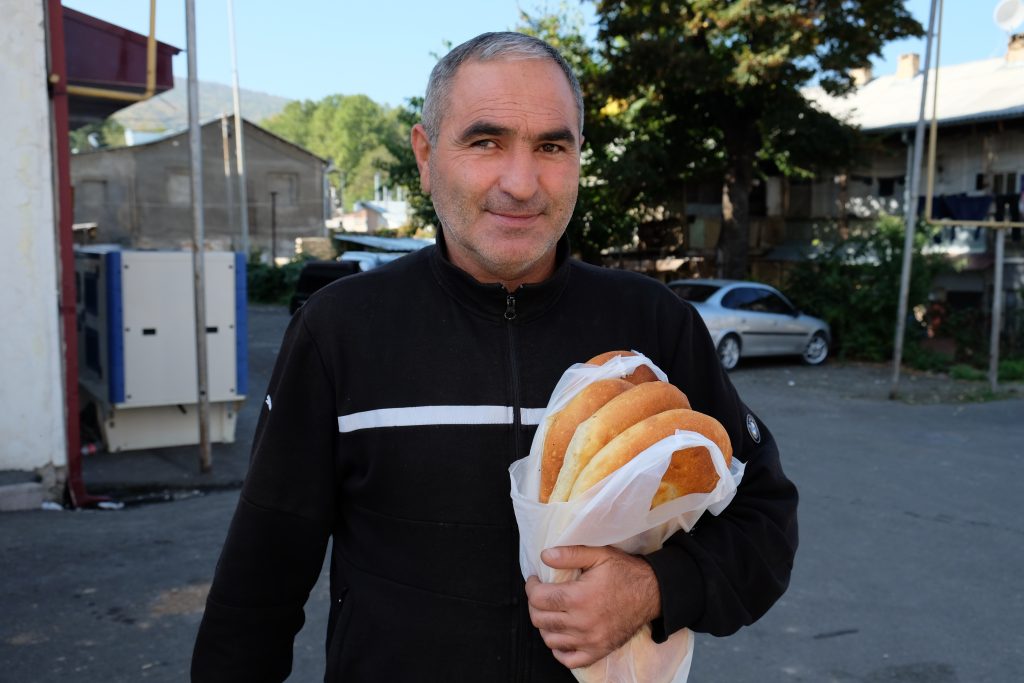 Lernik Zakaryan lives in Stepanakert. He comes every day to get bread for the people living in his neighborhood, because he has a car.

“It is not so safe to walk on the street, because they can bomb the city again at any moment. I organize all this faster by car. Every day I gather bread for the people of our yard, distribute it to them. We are all like a family who help each other with whatever they can,” says Lernik.

Many people lost their homes as a result of the shelling. For example, this house is located in the city of Martuni. It has been completely destroyed. 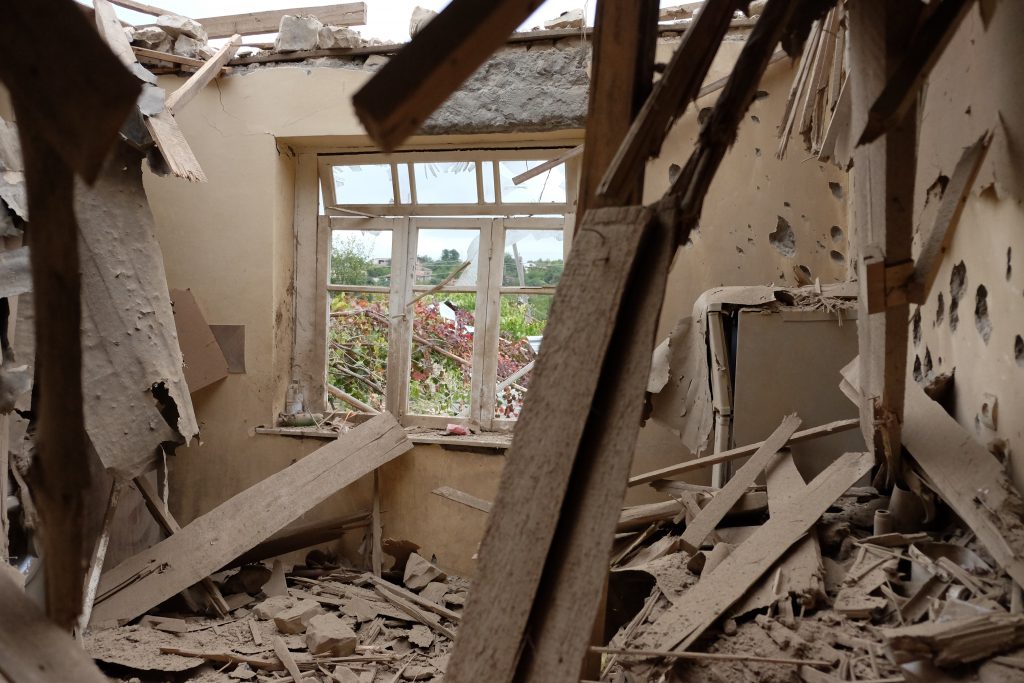 Some of the women and children, being left homeless, were temporarily moved to a safer place mainly to different cities and villages in Armenia. Now they live the life of refugees, without a home, without relatives and friends. This is not the thing they wanted, they were just forced to flee. 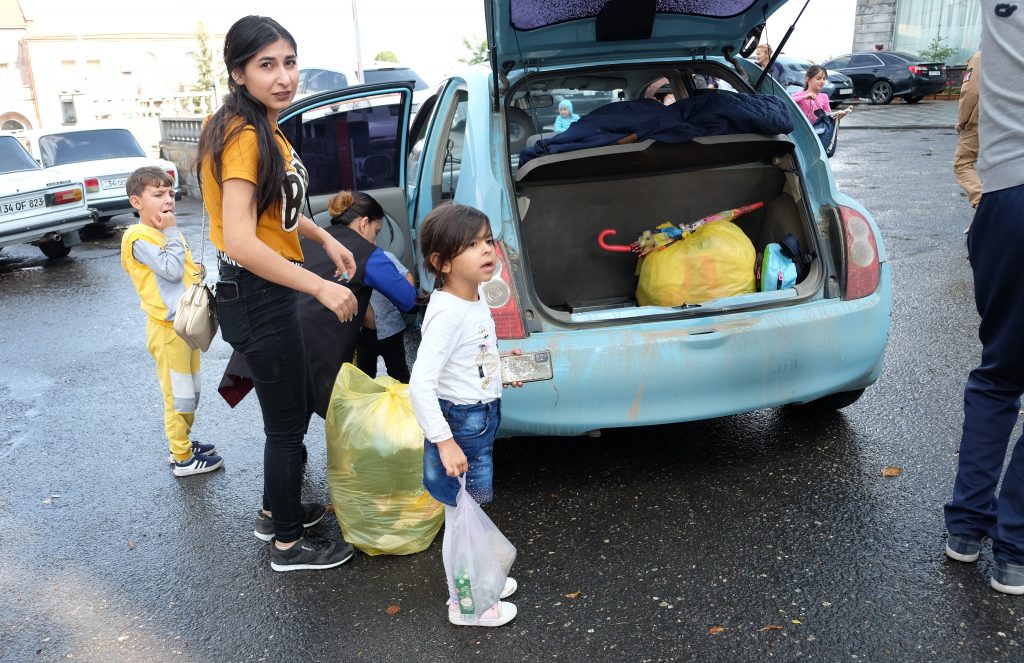 And some remain in basements and shelters. Some have even created certain conditions for themselves in basements. “We are not going to leave Artsakh. This is our home, where should we go? “Our sons serve, we must stay here to be worthy of them,” said Alvard. 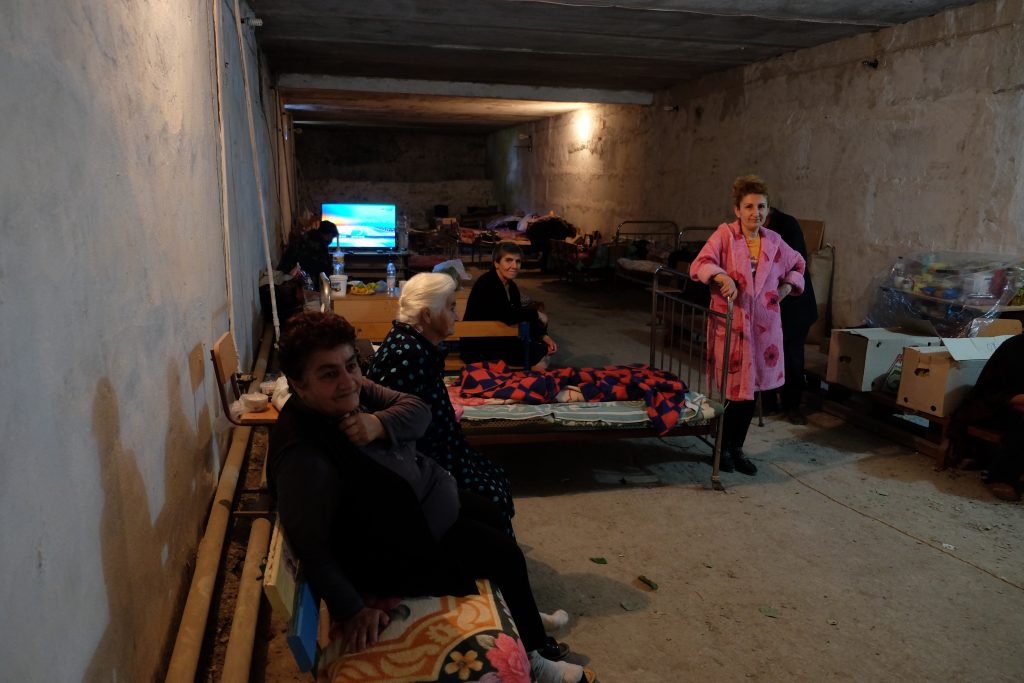 Life in basement in Stepanakert, October 2020 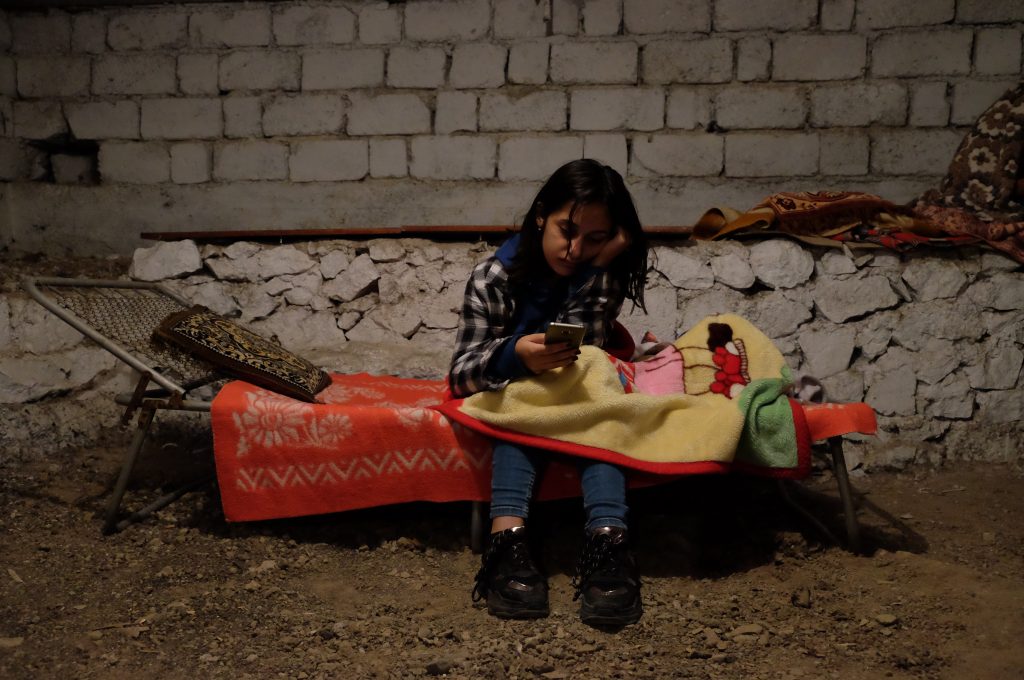 Maria. A basement in Stepanakert, September, 2020

“I was supposed to go to school, not to sit here and be afraid of bombs… That is unfair, that nobody cares about us and our childhood’’, says Maria sitting in a basement.

But despite all, Artsakh is still alive. People stay in their houses, basements, but do not leave Artsakh. They live in difficulties; in some districts there is not even electricity, water, but they continue to believe that everything will be fine, they will soon carry on their peaceful life. 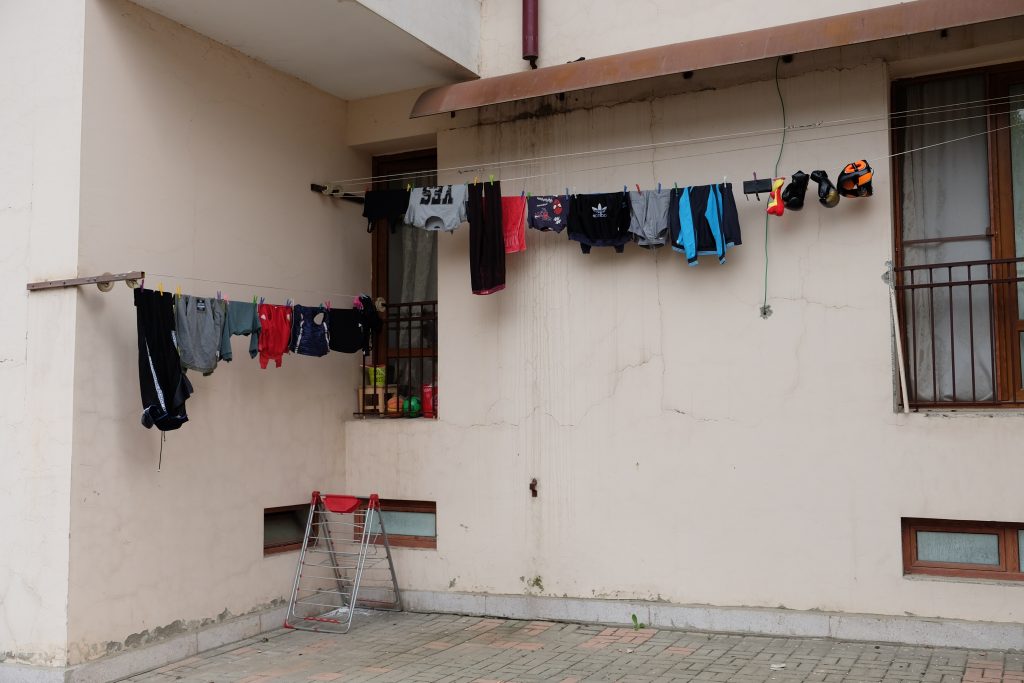