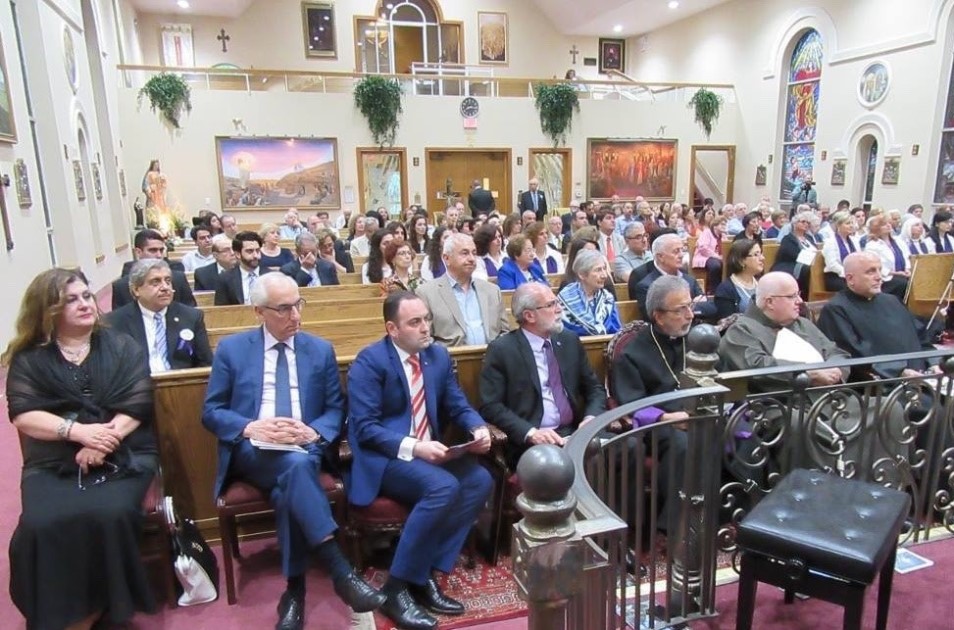 Toronto- On June 17 at the St. Gregory The Illuminator Armenian Catholic Church of Toronto, the Mekhitarian Alumni Association of Toronto (MAA-T) organized a celebration for Father Abbot Mekhitar of Sebaste and the 300th anniversary of his entry to San Lazzaro Island, near Venice. Present were high ranking representatives of various religious and political organizations and Embassies, the representative of Cardinal Thomas Collins, Reverend Timothy MacDonald, the Italian Consular Educational Advisor Maria Cristina Mignatti, the Armenian consul in Toronto Berdj Richard Sevazlian, and the Eparch of the Armenian Catholic Diocese of North America and Canada Bishop Michael Mouradian, along with former students of the monastery at San Lazzaro. The church was filled with congregation and the members of the Armenian community who had gathered to celebrate the legacy and the accomplishments of Father Abbot Mekhitar of Sebaste, the Armenian monk, scholar, theologian and founder of the Mekhitarist Order in 1701. Abbot Mekhitar’s main objective was to raise the educational and intellectual level and the spirituality of Armenian people. The Order was founded in Constantinople, but to escape persecution, the congregation relocated first to Methone in Greece, and eventually to San Lazzaro in 1717.

Over the past 300 years, the congregation of Mekhitarist monks have produced over 2,000 titled books, and have established a library of over 200,000 books published in Armenian and several European languages. Similarly, the Mekhitarian Congregation of Vienna has also published over 2,000 titled books and has created a library containing over 300,000 volumes in several languages. Both congregations established schools throughout the Middle East, Europe and Latin America, and possess large archival collections containing priceless manuscripts, works of art and maps. These achievements would not have happened without the vision of Mekhitar who provided the mission and the spiritual leadership in chartering the path and setting the objectives of the congregation, all reflecting his unwavering Christian faith and his endeavour for educational excellence. The keynote speaker for the evening was Father Mesrob Sulahian, a Mekhitarist monk, the Superior General of the Mekhitarist Mission in Lebanon and the Vicar General of the Armenian Catholic Diocese in Armenia, Georgia, Russia and Eastern Europe. Father Mesrob spoke passionately on the religious order’s leader, history and his own personal experiences as a monk in the congregation. He delivered his speech in Armenian, English and Italian to ensure that all guests are participants to the exceptional celebration. He promised to do everything in his power, to continue building on the Mekhitarist legacy to ensure the sustainability and flourishing of the congregation for the next 300 years. He emphasized that this would be possible under the leadership of Archbishop Levon Zekiyan, the faith of the Armenian people in the congregation, but especially the continuous support of the Mekhitarist alumni worldwide. Father Elias Kirijian, founding pastor of St. Gregory The illuminator Armenian Catholic Church and the host of the event, shared his words of praise to the congregation and the Alumni Association for their dedication and hard work in making the event an exceptional evening. He acknowledged that the alumni have been able to create a small but vital Mekhitarian community in Toronto. The Vice-President of the M.A.A.-T, Harout Mardirossian, delivered his message on this 300th jubilee by captioning the Armenian word “HASTZE”, which translates to ADDRESS, in English. In fact, after years of desperate search for Abbot Mekhitar, at the age of 41, he finally discovered a secure permanent address, in the serene Venetian lagoon, on the island of San Lazzaro. It took decades of transformation- from dilapidated buildings this island became a respectable address of Armenian enlightenment and renaissance, propagating to the entire Armenian nation, during the dark ages of the Ottoman rule. Maria Cristina Mignatti, the Italian Consular Representative, expressed her joy and happiness for her country’s contribution to the protection to this highly praised congregation in San Lazzaro, and expressed her pride in the order’s intellectual and spiritual accomplishments during the past 300 years on Italian soil. Reverend Timothy, the Cardinal Collins’ Representative, drew parallels between the Mekhitarist order and his own congregation, both experiencing persecution in the past. He praised the amazing and outstanding achievement of the congregation over the past 300 years. He then added that now that he knows about the congregation, he has all the motivation to visit San Lazzaro and pay homage to Mekhitarist fathers on his next trip to Italy. The evening was electrified by the 3 students (Michael Golendukhin, Purak Safarian, Daniel Movsessian) reciting the poetry written by one of the Mekhitarist monks, Father Alishan, in mid 1800’s. The poem’s title was “Hye Hanjar” in which the Poet concluded that the Armenians are not gone and that they are alive and will continue to flourish, despite all obstacles on their path. The biggest surprise of the evening was the performance by the “Aydenian Choir.” This was organized under the leadership of Yessai Sarkissian, a former Mekhitarist student who dedicated 10 years of his life preparing to be a monk himself. The choir was accompanied by pianist Lena Yozgadlian-Nahas, herself a former student of a Mekhitarist congregation of the Hazmieh school in Lebanon. Consisting of 22 volunteer singers, both amateurs and professionals, the choir performed liturgical songs from the Armenian mass composed by Abbot Arsen Aydenian in 1877 before the Yegmalian and Gomidas. Under the leadership of Armenia Sarkissian a separate small ensemble composed of 6 youth, in their 20’s (Karoun Chahinian, Maria Mardirossian, Gabriel Chahinian, Taniel Tanielian, Jivan stepanian) also performed without physical instruments, continuing the electrifying environment of the entire evening. The songs were composed by Abbot Mekhitar himself.

The entire event was an evening of pride and joy for the community, for the alumni and was a promise to revive the legacy of the Mkhitarist monks- the servants of Christian faith and Armenian culture.