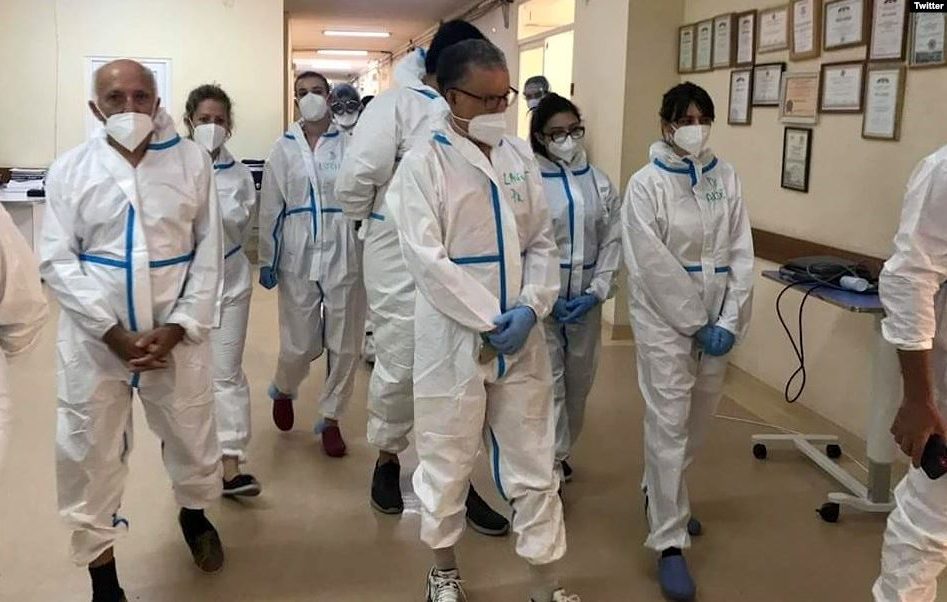 (Azatutyun)- A second group of French medics has arrived in Armenia to help local healthcare workers cope with the continuing coronavirus epidemic.

The Armenian Ministry of Health said the 9-strong group led by Laurent Papazian, a senior doctor from a hospital in Marseille, includes anesthesiologists, intensive-care specialists and nurses that have treated COVID-19 patients in France for the last few months. It said they will replace the first French medical team that arrived in the country on June 14.

The medics were deployed to Yerevan’s Surb Grigor Lusavorich Medical Center, Armenia’s largest hospital treating COVID-19 patients, on Wednesday morning at the start of their two-week mission financed by the French Foreign Ministry.

One of them, Hayk Vartanian, told reporters that he looks forward to sharing his coronavirus-related experience with Armenian colleagues.

“We had the same situation [in France] in the second half of March,” said Vartanian, who was born in Armenia and has lived in France for the last 26 years.

The Armenian government imposed a nationwide lockdown at around the same time. It began easing restrictions on people’s movements and business activity already in mid-April.

Vartanian suggested that this is one of the reasons why the virus is continuing to spread across Armenia. He said infection rates in the country remain high also because many Armenians still do not take the potentially deadly disease seriously.

“It is very important that people wear masks, regularly wash hands and follow other rules,” added the Paris-based doctor. “This is the only way to stop the spread of the virus.”

Prime Minister Nikol Pashinian and other senior officials make such appeals to the population on a virtually daily basis.

Two other medical teams came to Armenia from Russia and Lithuania late last week. They brought medical equipment and supplies donated to the Armenian health authorities fighting the epidemic.

Armenia is one of the worst-hit countries in the region, having reported 21,717 coronavirus cases as of Wednesday morning. The Ministry of Health registered 711 of those cases on Tuesday.

The ministry also reported the deaths of 18 more people infected with COVID-19. It said four of them died primarily because of other, pre-existing conditions. The total number of such fatalities thus rose to 130.

This figure is not included in the official death toll from COVID-19 which stands at 386.