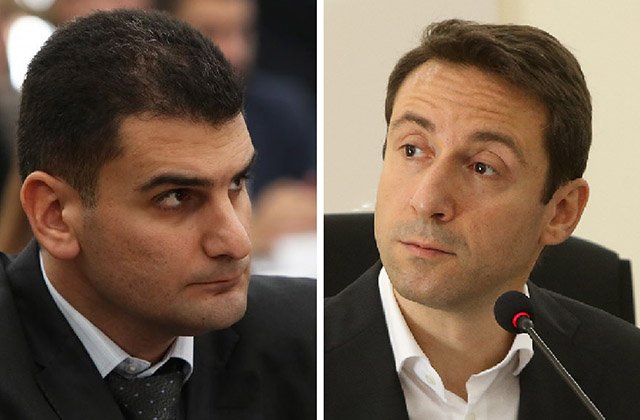 YEREVAN (Azatutyun.am)—Yerevan Mayor Hayk Marutyan accused Armenia’s political leaders of betraying the goals of the 2018 “velvet revolution” that brought them to power as he was ousted on Wednesday by the municipal assembly controlled by the ruling Civil Contract party.

He charged that Prime Minister Nikol Pashinyan and his political team have sought to stifle dissent and enrich themselves or their cronies instead of tackling poverty in the country.

Marutyan voiced the allegations during a session of the city council that approved, by 44 votes to 10, a motion of no confidence in him tabled by the pro-government My Step bloc. The council also elected one of his deputies, Hrachya Sargsyan, as Yerevan’s new mayor.

The bloc controlled by Civil Contract officially announced its decision to replace the mayor after meeting with Pashinyan on Friday. It said Marutyan quit Civil Contract in December 2020 and is not running the Armenian capital “with sufficient efficiency.”

The move followed months of growing friction between Pashinyan and Marutyan. The latter actively participated in the Pashinyan-led mass protests that toppled Armenia’s former leader, Serzh Sarkisian, in May 2018. The protests were sparked by Sarkisian’s attempt to prolong his decade-long rule and fueled by popular discontent with widespread corruption and injustice.

Speaking shortly before the vote of no confidence, Marutyan accused the ruling political team of having “deviated from the revolution’s values.”

“I thought that a [true] revolutionary’s supreme goal must be to improve the lives of other people,” he said. “In reality, as soon as they came [to power] they started improving their own lives, despite the fact that the country’s poverty rate continued to hover at around 30 percent.”

The former TV comedian singled out the Pashinyan government’s “secret” decisions to sharply raise the salaries of ministers and other senior government officials. He claimed that during his tenure he routinely received phone calls from unnamed “various officials” asking for privileged treatment of their cronies doing business in Yerevan. He did not name any of them.

Marutyan said this was a key reason for his subsequent rift with Pashinyan. “I didn’t expect such phone calls when I was joining the team,” he said.

“And now these people are saying that Hayk deviated from the revolution,” he went on. “This is said by people who at this difficult moment for the country are buying cars worth $200,000 and spending a whole month justifying, together with the entire team, that decision.”

Marutyan further alleged that Armenia’s “most high-ranking officials” have repeatedly pressured him to fire municipal employees criticizing the government on social media. “I said in response: ‘My dear friends, we did the revolution so that people are not fired and persecuted for their views like they were in the past,” he said.

Senior members of the municipal council loyal to Pashinyan hit back at Marutyan. One of them, Armen Galjyan, rebuked the ousted mayor for not countering what he called opposition attempts to stage a “counterrevolution” after Armenia’s defeat in last year’s war with Azerbaijan.

“Where was the Yerevan mayor during the counterrevolution?” he said. “Was he locked down in his office with a mask on his face or busy preparing to leave the party?”

Armenian parliament deputies representing Pashinyan’s party responded to the accusations with harsher criticism and personal insults. Parliament speaker Alen Simonyan, whose new expensive limousine has raised eyebrows in the country, said Marutyan is slandering the country’s leadership to “justify his treason and ineptness.”

“You must instead recall the names of your more than two dozen friends whom you have deceived and betrayed,” Simonian wrote on Facebook.

Pashinyan himself has not publicly commented on the dramatic falling-out with his erstwhile political ally.
The prime minister had chosen Marutyan to lead My Step’s list of candidates in the last municipal elections held in September 2018 and won by the pro-government bloc. Relations between the two men deteriorated after the 2020 war over Nagorno-Karabakh. Marutyan increasingly distanced himself from Pashinyan’s team in the following months and pointedly declined to support it during snap parliamentary elections held in June.

Earlier this month, the Haykakan Zhamanak daily belonging to Pashinyan’s family alleged that Marutyan has defected to the Armenian opposition and even secretly met with former President Robert Kocharian. The mayor categorically denied that.

Marutyan on Wednesday defended his track record and insisted that he is still supported by the majority of Yerevan residents.

Most of the residents randomly interviewed by RFE/RL’s Armenian Service in the streets praised him. Some condemned the ruling party’s decision to replace the mayor.

“I am very saddened by his removal from his post because he has delivered on everything that he promised during the election campaign,” said one middle-aged woman.

Others were unimpressed with Marutyan’s three-year tenure. “What has changed [in Yerevan?] Not much,” said a young woman.

Virtually no respondents had ever heard about Hrachya Sargsyan, Yerevan’s new mayor. Sargsyan, 36, told reporters that he is “happy with Mr. Marutyan’s work” and plans to “complete the programs that we launched in 2018.”