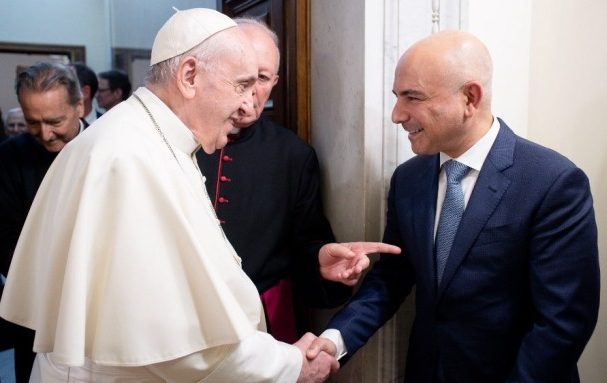 (Variety )- Los Angeles-based physician and producer Eric Esrailian, who recently received a medal from Pope Francis for his philanthropic activity around awareness of the Armenian Genocide, is developing a TV series entitled “Ceasefire” about the Northern Ireland peace process.

Oscar-winning Irish writer-director Terry George (“In the Name of the Father”) is attached to direct.

“Ceasefire” is to depict the dynamics and diplomacy that facilitated the historic Good Friday peace agreement of April 1998, which helped transform Northern Ireland after decades of bitter conflict, in hopes that it can help similar political situations.

George previously directed Armenian genocide drama “The Promise,” which was bankrolled by late billionaire Kirk Kerkorian, and starred Christian Bale and Oscar Isaac. In 2017, prior to its U.S. release, the movie screened at the Vatican Cinematheque in a clear sign of Catholic Church support.

More recently, Esrailian was among the producers of the Discovery Plus doc “Francesco,” directed by Evgeny Afineevsky, in which the Pope talks candidly about hot button issues such as same-sex couples, women’s rights and sexual abuse in the church. “Francesco” also features footage of Francis’ 2016 visit to Armenia, during which he used the term “genocide” to describe the slaughter of an estimated 1.5 million Armenians by Ottoman Turks during World War I.

“For nearly 100 years the Turkish government influenced storytelling in the United States by suppressing the story and pressuring the U.S. State Department,” Esrailian noted.

But in 2019, the U.S. recognized the Armenian genocide through two congressional resolutions passed by both houses of Congress.

“I’m someone who loves working in storytelling for social impact,” said Esrailian, who on Oct. 25 received the Benemerenti medal from Pope Francis for exceptional service to the Roman Catholic Church, becoming the first Armenian to receive this honor.