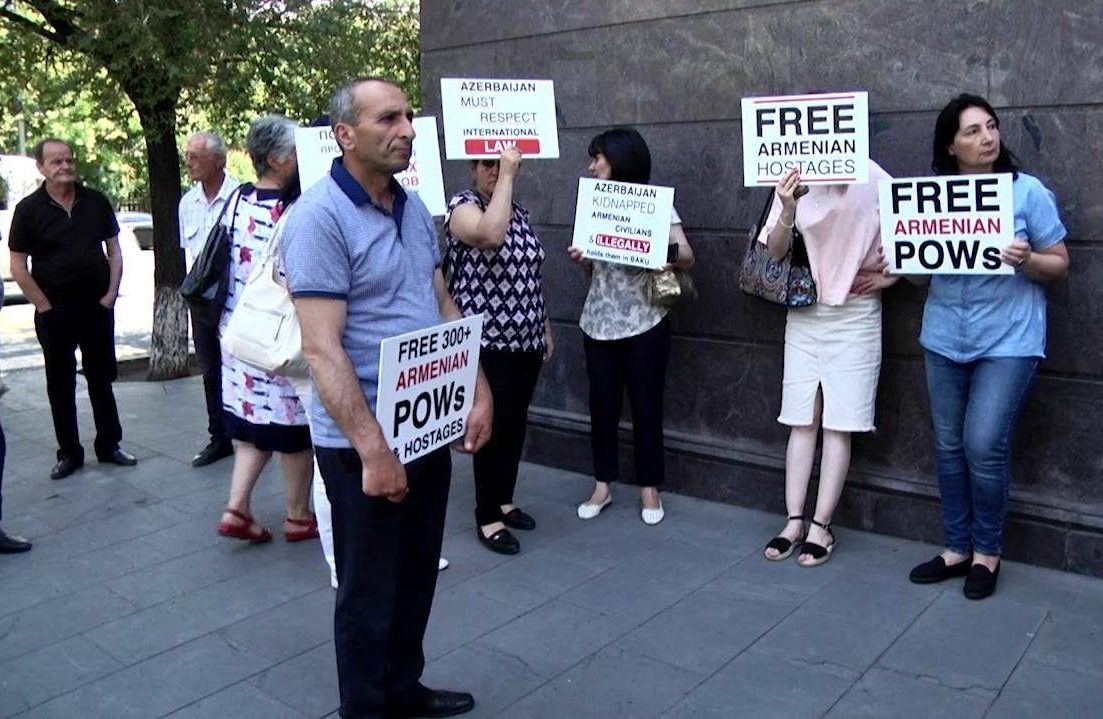 Parents of Armenian POWs held by Azerbaijan stage a protest in front of the National Assembly of Armenia in Yerevan, August 2, 2021

YEREVAN (Azatutyun.am)—Prime Minister Nikol Pashinyan has sparked a public outcry after calling for an investigation of the circumstances in which over a dozen Armenian soldiers were taken prisoner by Azerbaijan during the latest border clashes.

During a question-and-answer session in parliament on Wednesday Pashinyan was asked by an opposition lawmaker about what he knew about the fate of the 13 servicemen captured by Azerbaijani forces during the November 16 fighting and dozens others remaining in Azerbaijan after last year’s war in Nagorno-Karabakh as well as what his government has been doing to prevent violence against them.

In answering the question, however, the prime minister said nothing about what is known about the condition of these captives. Instead, he spoke about the need to investigate circumstances of their captivity.

“I think it is time for us to investigate every case of captivity properly, because every soldier serving in the Armed Forces of the Republic of Armenia has responsibilities. Perhaps we have been wrong in this because of the emotional background, but all cases must be clearly examined. What does it mean to be taken prisoner? Under what circumstances?” Pashinyan said.

“Such an answer is unbecoming to the commander-in-chief, unbecoming to the prime minister, the one who, under the Constitution, is the guarantor of the life, rights and freedoms of every citizen of Armenia,” Karapetyants said.

The human rights activist said that she expected to hear from the prime minister about what is being done to repatriate the soldiers. “But instead, it turns out that we need to understand how much guilt a captured, tortured or killed soldier has had. But are there any questions to the generals, to the officers of these soldiers or questions for your own self? Why were our soldiers left defenseless? Why were they taken prisoner? Why can’t we repatriate our soldiers from captivity?” the human rights activist said.

Karapetyants said that while discussing whose negligence it was in every case may be necessary, it is more urgent now to get people out of captivity today.

“But it is clear that it couldn’t be through the guilt of a soldier who has served in the army for only six months. These soldiers had officers and generals above them to manage all that, they had their minister of defense and finally they had the commander-in-chief. These are issues that couldn’t be solved by a private,” she said.

Over a hundred Armenian POWs and other detainees have been repatriated from Azerbaijan since the end of hostilities in and around Nagorno-Karabakh in November 2020. Scores, however, continue to be held by Azerbaijan despite a ceasefire provision calling for the return of all captives and hostages.
Pashinyan also drew criticism from the opposition last summer after suggesting, during an election campaign, that Armenian captives could wait a little longer before they could be released.