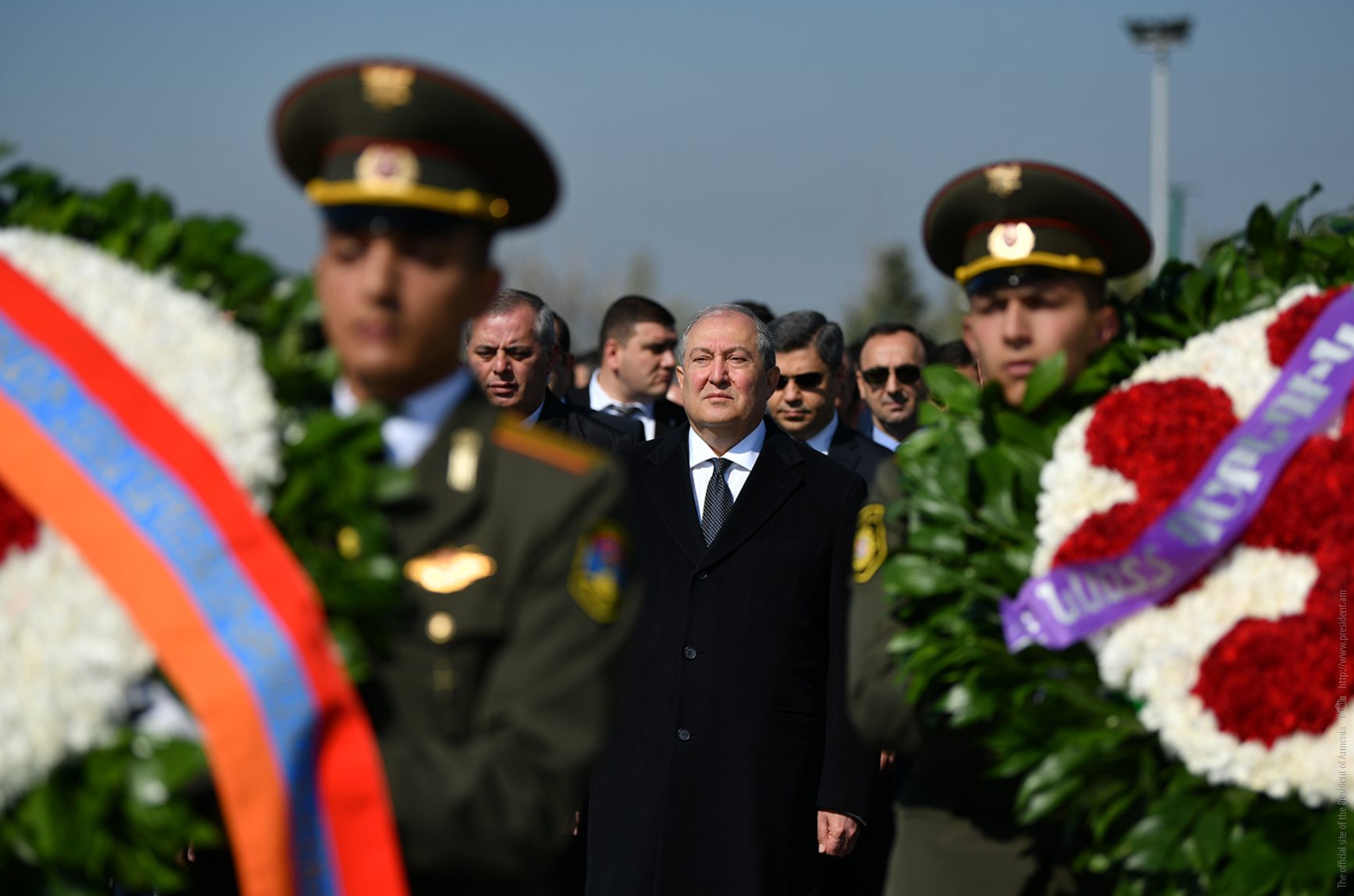 President Armen Sargsyan pays tribute to the memory of the Armenian Genocide victims in Tsitsernakaberd, 24.April 2019

Statute of limitation does not apply to the crime of genocide, President Armen Sarkissian said in a message on the 105th anniversary of the Armenian Genocide.

“Recognition of the Armenian Genocide by Turkey and elimination of its consequences is a matter of security for Armenia, the Armenian nation, and the region,” President Sarkissian said.

Below is the full text of the President’s address:

This year, the anniversary of the Armenian Genocide is commemorated in accordance with a protocol forced on us by the pandemic. However, our tribute to the memory of our holy martyrs has never been measured by the visits to the Genocide Memorial in Yerevan or other memorials dedicated to the Armenian Genocide.

We remember our victims all the time and everywhere, no matter where in the world we are. We pray for them in our souls and minds, name by name. Remembrance and the pain of loss, intertwined with our resolve to win and achieve justice by being alive, has been with us for the last 105 years.

The Armenian Genocide took place more than one hundred years ago; the Armenian people were deprived of their possessions and of their fatherland. But the entire Armenian nation is waiting for the re-establishment of justice and truth.

Many historians and analysts, state and political figures of the day, considered one of the greatest injustices of the world created after the WW I the total neglect for the rights of the Armenian people.

The loss of 1.5 million lives had a substantial impact on the reproductive abilities of our nation: today our numbers should have been not 10-12 million but at least it’s double.

The issue of recognition of the Genocide, which the Armenians raise before the international community and Turkey, has a number of components: duty of remembrance, prevention of the repetition and condemnation of such crimes, elimination of the consequences of the Genocide.

It is unacceptable to view the recognition of the Armenian Genocide from the standpoint of momentarily economic or political interests related to Ankara.

Such an approach will stop the world in its advancement.

We cannot on one hand declare that we are going to fight together against xenophobia, discrimination, intolerance, anti-Semitism, denial and other all-human vices, and on the other hand “play diplomacy” with Turkey on the Armenian Genocide.

Many of the states, which have huge interests in Turkey, have overcome that barrier, and we are grateful to them.

We are also grateful to the countries after the Genocide opened their doors and gave refuge to those who had survived that catastrophe.

We are grateful to the missionaries, military doctors and nurses, diplomats and to the nations and individuals who in those desperate days often put their own life and safety in harm’s way and lent a helping hand and saved many Armenians.

The stance of the successive Turkish governments, which have been carrying out the denial policy on the state level to escape the recognition of the Genocide is unacceptable.

Statute of limitation does not apply to the crime of genocide. Recognition of the Armenian Genocide by Turkey and elimination of its consequences is a matter of security for Armenia, the Armenian nation, and the region.

We will not forget the Armenian Genocide; we will not submit to its consequences.

Today, along with painful memories, we ought to speak also about the tenacity and heroism of our people.

The Genocide was also a story of daily heroism when life and survival became a struggle. We strived, struggled, and triumphed.

We were able to triumph over death; we survived and reemerged. Today’s independent Armenia, the free Artsakh, as well as the well-organized and successful Diaspora testify to that and give us new opportunities.

Opportunities to unite as a nation and people, to combine our efforts and abilities to achieve our national aspirations.

I am sure of that.

I remember and demand.