Religious Leaders of Armenia, Russia and Azerbaijan Meet in Moscow 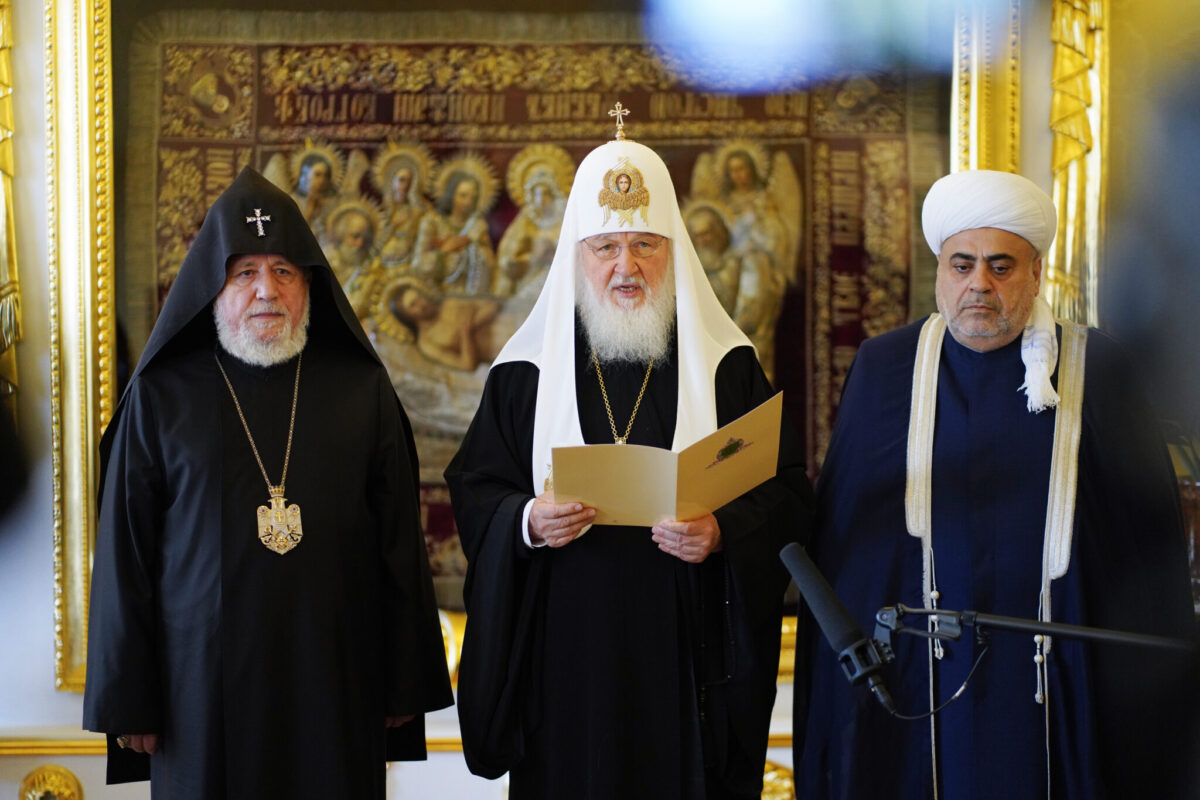 (Armradio)- The meeting of religious leaders of Armenia, Russia and Azerbaijan was held in Moscow today.

His Holiness Karekin II, Supreme Patriarch and Catholicos of All Armenians, and Allahshukur Pashazade, the Chairman of the Caucasus Muslims’ Board, arrived in Moscow at the invitation of Patriarch Kirill of Moscow and All Russia to discuss ways to resolve the Nagorno-Karabakh conflict.

Following the meeting Patriarch Kirill expressed gratitude to the religious leaders of Armenia and Azerbaijan for their willingness to meet and discuss complex issues that concern the residents and religious communities of the two countries.

“We are convinced that our religions have a unique peacemaking potential, especially in such a delicate and sensitive area as interethnic relations. No matter how difficult the Armenian-Azerbaijani relations are at this stage, we believe that it is faith in God and love that can help heal the wounds inflicted by many years of tragic confrontation. This is a very difficult path, which requires spiritual wisdom and foresight,” Patriarch Kirill said.

His Holiness Karekin II stressed that there is no alternative to the peaceful settlement of the Karabakh conflict in terms of establishing stability and peace in the region, guaranteeing a safe and secure life.

He added, however, that despite the willingness of the Armenian side to reach a final settlement of the issue and the peacemaking efforts of the Co-Chairs, the situation in the region remains worrisome and tense due to the degrading, unacceptable rhetoric and unconstructive policies adopted by the Azerbaijani authorities.

The Catholicos stressed that the Karabakh conflict cannot be solved as long as Azerbaijan continues to be guided by the principle of use of force and maximalist aspirations.

“State-level anti-Armenian propaganda, violence and killings of civilians, the so-called Trophy park in Baku are evidence of the fact that the people of Nagorno Karabakh can never live safely and survive in Azerbaijan,” he added.

His Holiness noted that the prisoners of war and civilian detainees frequently subjected to humiliation and torture and emphasized that the need for their soonest release.