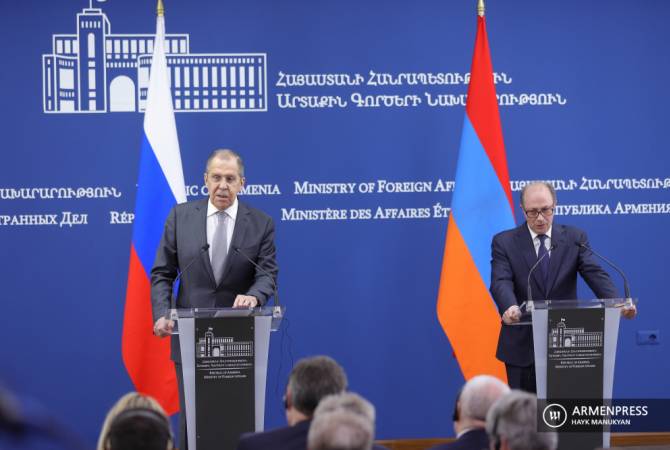 Russia’s Foreign Minister Sergei Lavrov (left) with his Armenian counterpart, Ara Aivazayn in Yerevan on May 6

YEREVAN (Azatutyun.am)—Russia will keep doing its best to ensure the full implementation of the Russian-brokered agreement that stopped the Armenian-Azerbaijani war in Nagorno-Karabakh, Foreign Minister Sergei Lavrov said during a visit to Yerevan on Thursday.

“We are not reducing our efforts at returning all detainees to their homes, de-mining, preserving cultural and religious heritage as well as launching the work of relevant international organizations in Nagorno-Karabakh,” Lavrov said after talks with his Armenian counterpart Ara Aivazyan.

In that context, he stressed the importance of Russian efforts to get Armenia and Azerbaijan to open their transport links after decades of conflict. He said a trilateral working group formed by the Russian, Armenian and Azerbaijani governments for that purpose is helping to further stabilize the situation in the Karabakh conflict zone.

“The success of this work will be decisive for normalizing the overall situation and laying the groundwork for creative cooperation in the post-conflict period,” added Lavrov.

He further stated that Armenia and Azerbaijan are now also engaged in a demarcation and delimitation of their internationally recognized border. Prime Minister Nikol Pashinyan and other Armenian officials have repeatedly made statements to the contrary.

Speaking at a joint news conference with Lavrov, Aivazyan reiterated the official Armenian line that the conflict cannot be deemed resolved until the conflicting parties agree on Karabakh’s status, the main bone of contention.

Yerevan says such an agreement must reflect peace proposals made by the OSCE Minsk Group co-headed by Russia, the United States and France.

Lavrov, who is due to visit Baku early next week, said the group’s chief priority now must be to create an atmosphere of mutual trust.

In a joint statement issued on Wednesday, the Minsk Group co-chairs called for “concrete steps to create an atmosphere of mutual trust conducive to long-lasting peace.” They urged the parties to “fully and expeditiously complete the exchange process for all prisoners, detainees, and remains, and to respect their obligations to ensure the humane treatment of detainees.”

The statement came the day after Azerbaijan released three more Armenian prisoners of war.
Baku remains reluctant to set free more than 100 other Armenian POWs and civilian captives believed to remain in Azerbaijani captivity. Yerevan regards this as a gross violation of the November 9 truce accord brokered by Russian President Vladimir Putin.

Meeting with Pashinyan later on Thursday, Lavrov said Russia will spare no effort to secure the release of the remaining Armenian prisoners. “We are confident that we will manage to solve this issue soon,” he said.

Lavrov also assured Pashinyan that Moscow remains “committed to ensuring the security of our ally, Armenia.”

Canada Calls For Release Of All Armenian Captives