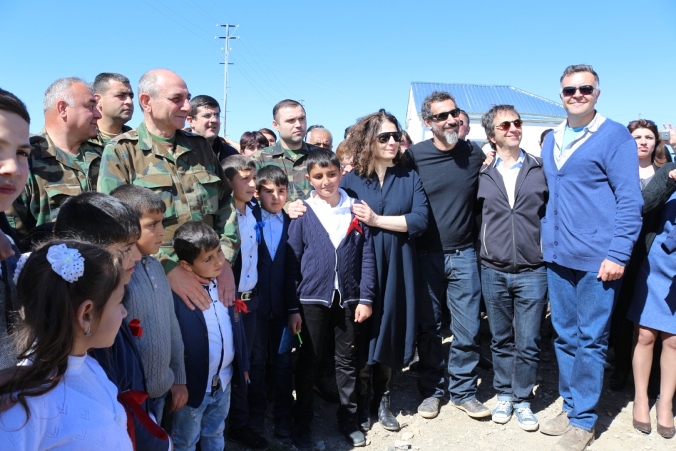 The village was established in 2004 by the Tufenkian Foundation, one of its largest and most important initiatives aimed at resettlement and development of the liberated territories in Artsakh. Realizing the strategic significance of the Arajamough village due to its proximity to the front line, the military bases and its connections to the rest of the villages, the Tufenkian Foundation has built the village from the ground up, by constructing houses and schools, providing water, power lines, and gravel roads and ensuring that villagers are engaged as active and creative participants in developing their surroundings. The visit of the famous Armenian artists and the President of the Artsakh Republic, and, most importantly, the opening of the new houses was a highly significant event for the Arajamough village and for Artsakh altogether. By resettling in Artsakh, building houses, establishing schools and starting lives in such war-torn territories, the people of Artsakh are yet again showing the world their perseverance, strength and the ceaseless will to create, thus inspiring hope in the future of Artsakh. Addressing the participants during the opening ceremony Tufenkian Foundation Executive Director Raffi Doudaklian highlighted the importance of the development of the Arajamough village not only for the people of Artsakh, but also for Armenians everywhere in the world.

Raffi Killian of the Artsakh fund – Eastern USA, which is gradually assuming responsibility for the village’s future growth and prosperity, said that “Artsakh is the backbone of our national identity” and reaffirmed the readiness of the fund to continue their work in Arajamough. The keys of the new houses were handed to the 6 families by Serj Tankian, Arsinee Khanjian, Atom Egoyan, Eric Nazarian and donors from the Armenian Diaspora, who expressed their honor to play a role in the new beginning of the lives of the people of Arajamough.

The houses have been built through the joint efforts of the Tufenkian Foundation, Artsakh Fund – Eastern USA and the Government of the Artsakh Republic.

Serj Tankian hopes to give a concert in Artsakh soon