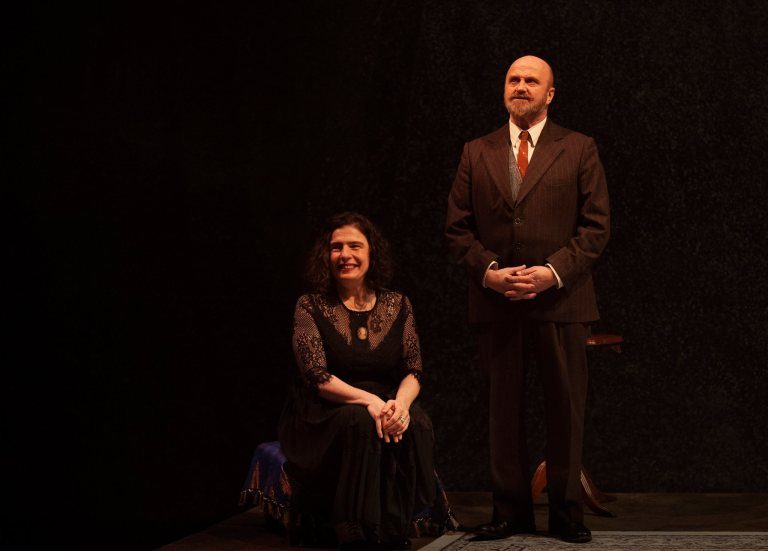 Chekhov’s last play, The Cherry Orchard, written in 1903, just one year before his death, is considered his final masterpiece. Like so many of his contemporaries, and many of our own Armenian intellectuals, his death was tragically brought upon by tuberculosis, bringing a halt to both his time on earth as well as the potential contributions he still had to make to the literary canon.

The melancholy nature of his demise seems to add a somber tint to what has long been considered by most, to be one of the most significant classical works of 20th century theatre. Chekhov himself described The Cherry Orchard as a comedy, believing that it reflected the absurd and ridiculous aspects of the human experience in its portrayal of a Russian aristocrat and matriarch returning home after many years abroad, faced with mounting debt and being forced to contemplate the reality of losing the family estate- including an impressive cherry orchard.

Arsinee Khanjian stars as the matriarch, Lyobov, in the Modern Times and Crow Theatre Company’s minimalist adaptation of the Chekhov classic, which recently wrapped up a successful multi-week run at the Streetcar Crowsnest Theatre, located in Toronto’s east end.

Khanjian stars alongside Cliff Saunders, playing the role of sibling Leonid Gayev, as a pair of fading aristocrats, without much business acumen. Throughout the piece, they struggle to find an alternative to auctioning off the estate and are forced to deal with transitioning out of their privileged lot in life.

Modern Times and Crow Theatre Company delivered an austere version of the piece, with director Soheil Parsa staging the lush estate and abundant orchards on a simple black set with little to no furniture. The sound designer, Thomas Payne, amplified the expansive mass of the stage with an assortment of foot steps, shutting drawers and more: always in the background, impactful but not overwhelming. All of these creative choices force both the writing and performances into the spotlight, and luckily- both truly delivered.

Lead actors delivered powerful and moving performances, shuttling their audience between peals of laughter and teary eyes with relative ease.

This adaption of The Cherry Orchard thrives by focusing on the meaningful, definitive performances. The surveying of human principles in the text itself, with its themes of cultural futility and the effect social changes has on people, has continued to remain relevant and invoke familiarity more than a hundred years after it was written. That part, I enjoyed the most.