Sold Out Komitas Concert In Toronto A Major Success 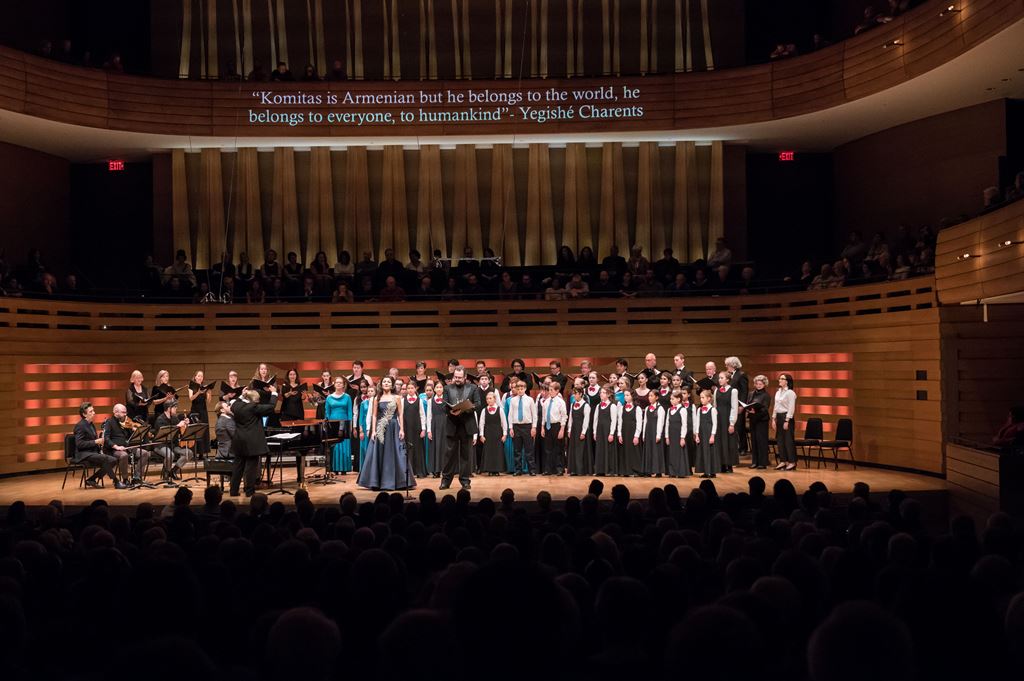 Friday, October 25, 2019 will be etched in the memory of the Toronto Armenian community as the date when the music of Father Komitas resonated in a most unprecedented way on the stage of the prestigious Koerner Hall at the Telus Centre for Performance and Learning (home of the Royal Conservatory of Music – RCM). Co-presented by the RCM and the Amici Chamber Ensemble, “Komitas: a Canadian Tribute” was the brainchild of pianist-composer Serouj Kradjian. For this 150th anniversary celebration, Kradjian’s vision was to present Komitas to the broader Canadian audience, and to this effect, he had spared no effort, from the choice of the venue and the partnership with the RCM, to the choice of mostly Canadian performers – some of the finest in the country.

Kradjian selected his program with the aim to tell the life story of the iconic Armenian priest-musician through his music with the aid of projections of explanatory texts and surtitles of translated lyrics along with subtle changes of lighting that projected the emotion that emanated from both the music and the narrative. The occasional inclusion of dances, gracefully performed by four members of the Erepuni Dance Ensemble reflected Komitas’s description of Armenian dances as “majestic yet flexible”. As one patron put it, this commemoration was “not only a superb concert presentation, it was an Experience for all of us involved!”

The musical program flowed seamlessly from “Aravot Lusaber” (Morning that brings light) to two excerpts from the Liturgy, two dances for piano, and a set of peasant songs for baritone solo, describing various aspects of Armenian peasant life. The fateful moment of Komitas’s arrest and deportation on April 24, 1915, which was to mark the beginning of the Armenian genocide, was described through the music of one of his most loyal followers, composer Tigran Mansurian’s “Qui tollis peccata mundi”, alluding to the Latin prayer “Lamb of God, who takes away the sins of this world, have mercy upon us”. The calamity that struck the Armenian people was expressed through the song “Dle Yaman”, which symbolically transformed “from love song to lament” beautifully interpreted by soprano Lynn Isnar, and the resulting grief of an uprooted people was expressed through “Andouni” (Migrant’s song) sung with great intensity by Russell Braun.

Shortly before his arrest, Komitas had composed what was to become his last song, “Children’s Prayer”. In the meantime in France, the great composer Claude Debussy was writing his last song before succumbing to illness, “Christmas for Homeless Children”, as a reaction to the

devastation caused by World War I, and which was premiered at a benefit concert held in Paris in solidarity with the Armenians, on April 9, 1916. The two composers had mutually admired each other, and therefore it was only fitting to have their last songs paired in this anniversary concert, performed admirably by the two children’s choirs.

What followed was, according to many patrons, an emotional highlight when, in total darkness, they heard Komitas’s own voice singing “Hov arek” (Make a breeze). The gradual introduction of instrumental accompaniment, choir and Braun’s solo brought the song to an intense climax, only to end quietly once again with the priest’s expressive voice in his crackling 1910 cylinder recording, as the hall sank back into total darkness.

The second part of the program was a testimony to the vitality of Armenian traditional culture, with samples describing the life of the Armenian peasant through songs of labour and love, while also highlighting Komitas’s keen interest in the musical education of youth through his children’s songs, and concluded the evening with cheerful wedding songs. Following Kradjian’s word of thanks to all present and to those who contributed to the success of the evening’s concert, all performers joined forces for a brilliant rendition of “Hayastan” (Armenia) which literally brought the audience to its feet.

Patrons’ compliments are a testimony to the concert’s exceptional power to awe the audience : “The Komitas Tribute was a roaring success, a feast to the ears and eyes,” wrote one. Another was impressed by the “masterful performances beautifully flowing in a compelling and powerful storyline”, whereas a third praised Kradjian for his “artistic convictions and determination while offering us a cultural gift of universal interest and quality.”

In his impassioned speech, Kradjian stressed that there is a place for Armenian art music in the Western concert repertoire. His liner notes echoed that idea in regards to Komitas: “There is a mystical and a universally soul-stirring quality to his songs, with an air of blissful sadness and child-like simplicity that captures and moves the listener regardless of nationality, race, or religion.” Confirming Kradjian’s success in achieving his goal, one Toronto critic (John’s opera ramblings) wrote: “Last night what I felt was joy and inclusion. It was an extremely well curated concert of rather beautiful music extremely well performed.” He then concludes with the following words: “It is hard to imagine a celebration of this sort being better organized or executed. The beauty of the music was ever present but the background horror was neither ducked nor dwelt on mawkishly. I found the whole thing very moving.”

At the time of writing this article, the livestream statistics came in indicating more than 4,000 views, including North America, Armenia, the Middle East, Europe and Australia. Impressive indeed!

Novel and ambitious in its conception, Komitas: A Canadian Tribute was the fruit of love and faith in the lasting universal value of Komitas’s art. Kradjian and all the members of the talented cast, as well as the supporters of this high stakes project are to be commended for its astounding success. Lynn Isnar in a solo accompanied by the Amici Chamber Ensemble. Russell Braun and the Elmer Iseler Singers under the baton of Lydia Adams. International Brands with Made In Armenia Label: 4 Major Garment Factories Opened in Armenia