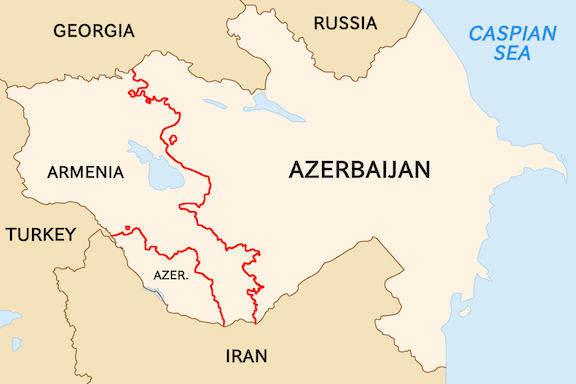 The Soviet Armenia and Azerbaijan borders

YEREVAN (Azatutyun.am)—Armenia and Azerbaijan are not engaged in the formal delimitation of their borders, while border guards are being temporarily deployed according to 1975-1976 military maps, Armenia’s Deputy Prime Minister Tigran Avinyan said.

In an interview with RFE/RL’s Armenian Service on Friday, Avinyan said that a process of border delimitation and demarcation would require at least the establishment of bilateral relations between the two neighboring nations that waged a war over Nagorno-Karabakh last fall.

“These are legal processes. As such we do not have legally fixed borders with Azerbaijan. For such processes, I think, we first need to have bilateral relations, because these processes presuppose the establishment of at least bilateral relations,” he said, adding that border delimitation and demarcation are a long process requiring much effort.

The need for specifying borders between Armenia and Azerbaijan arose after the two countries signed a Russian-brokered ceasefire agreement last November putting an end to a six-week war in which more than 6,000 people were killed.

Under the terms of the document called a trilateral statement, a chunk of Nagorno-Karabakh and all seven districts around it were placed under Azerbaijani administration after almost 30 years of control by ethnic Armenian forces.

The agreement also led to the deployment of around 2,000 Russian peacekeepers along frontline areas and a land corridor connecting the disputed territory with Armenia.

As Armenians withdrew from several districts it created an additional border between Armenia and Azerbaijan. The matter, in particular, concerns Armenia’s southern Syunik province and eastern Gegharkunik province.

In the interview Avinyan again insisted that Armenia and Azerbaijan have signed no other document besides the November 9 ceasefire agreement and the trilateral statement signed in Moscow on January 11 this year.

“In any case, I am not aware of any such document. As for the agreements on the Goris-Davit Bek section [of the road in Syunik], these agreements are with the Russian side, and Russian border guards are stationed there on the basis of these agreements,” the deputy prime minister explained.

Addressing the issue of Armenian captives in Azerbaijan, the official expressed confidence that Armenia will achieve results in getting them released by Baku.

“The Russian Federation unequivocally shares our approach that all prisoners of war and detained persons must be returned… And I am definitely convinced that we will achieve results. I also want to emphasize that international pressure on Azerbaijan in this regard is growing and will continue to grow,” Avinyan said.