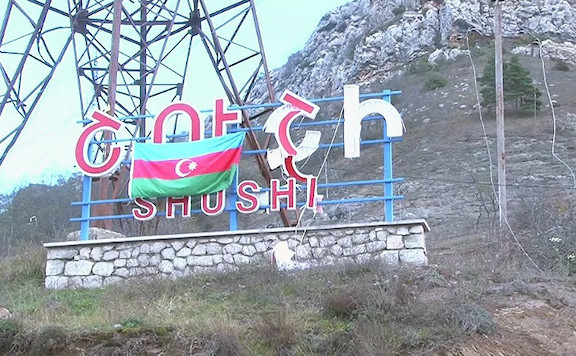 (Asbarez)- In a memorandum sent to international organizations, the Artsakh Foreign Ministry warned that attempts by Azerbaijan to change the status of territories it is currently occupying as a result of its military attack on Artsakh last fall go against international legal precedents and are a continuation of Azerbaijan’s anti-Armenian policies.

The impetus for the memorandum, the foreign ministry explained, was visits made by Azerbaijani President Ilham Aliyev to the occupied territories, especially his visit to Shushi last month, where he made several threatening statement replete with military rhetoric that exhibited “outright hatred toward the Armenian people.”

The memorandum specifically says that after the 44-day war, which was started by Azerbaijan with the support of Turkey, which also deployed mercenaries from various organizations, “the Azerbaijani authorities have set a course to impose a fait accompli created through the use of military force in blatant violation of norms of international law.”

“The provocative and inflammatory nature of the visits and the accompanying statements attest to Azerbaijan’s intent to disrupt the resumption of the negotiation process on a comprehensive settlement of the Azerbaijan-Karabakh conflict and to keep the conflict without a resolution. Such destructive and defiant behavior by Azerbaijan should be strictly condemned by the international community,” the memorandum says.

The document underlines that the people of Artsakh exercised their right to self-determination and established a state in those territories. “The failure to respect this fundamental right is not only a violation of human rights, but also one of the main sources of serious threats to the security of the region,” the memorandum states.

“Any legislative and administrative actions by Azerbaijan to change the status of the territories of the Republic of Artsakh, including the expropriation of land and properties, the transfer of populations to the occupied territories and the incorporation of the occupied territories, are invalid under international law and cannot change their status. No territorial gains resulting from the threat or use of force should be recognized as legal,” the memorandum explains.

The document emphasizes that the current military occupation by Azerbaijan of the territories of the Republic of Artsakh, including the city of Shushi, does not allow for a change of their their status. “The city of Shushi is an integral part of the Artsakh Republic in a number of aspects, including territorially, culturally, economically and historically. Any attempt to seize it is a gross violation of the territorial integrity of Artsakh,” the memorandum points out.

“Only a just settlement of the Azerbaijan-Karabakh conflict—one that will eliminate its root cause associated with Azerbaijan’s unwillingness to recognize the rights of the people of Artsakh—will reverse the consequences of the illegal use of military force by Azerbaijan and re-institute the primacy of the principle of peaceful resolution of disputes,” the memorandum concludes.

Unlawful Attacks on Medical Facilities and Personnel in Nagorno-Karabakh