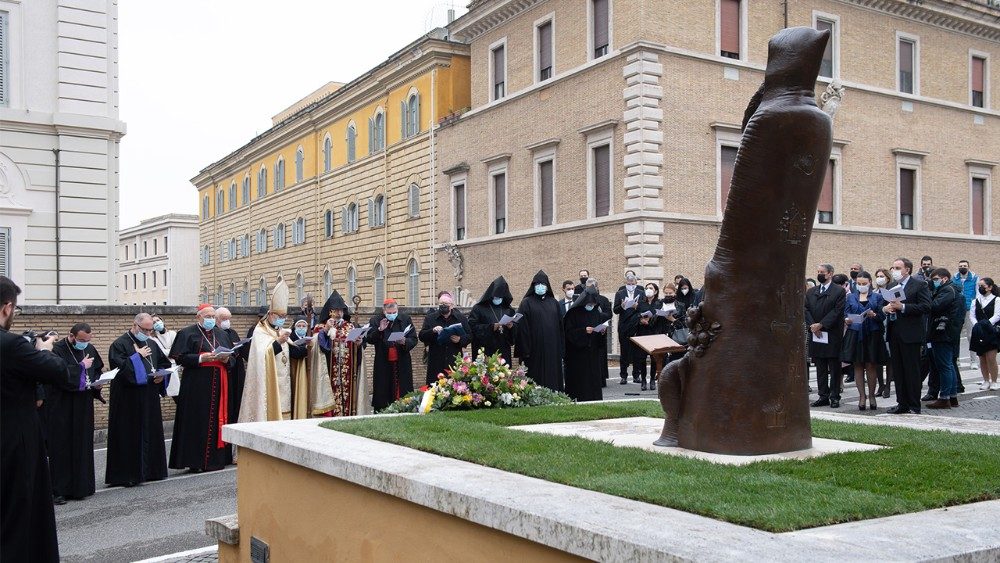 The first observance of Gregory of Narek Day was held in Vatican today,

The Holy Sacrifice was attended by a very small number of participants, in view of the situation created by the epidemic. Among those present were the Apostolic Delegate for Western Europe of the Mother See of Holy Etchmiadzin, Archbishop Khazhak Barsamian, and other clergy members of the Apostolic Church, the great Rev. Fr. Narek Naamoyan, along with his fellow priests, the heirs of the Levonian Theological Seminary, Armenia’s Ambassador to the Holy See Garen Nazarian and the staff members of the two embassies, as well as several Armenian and foreign guest and journalists.

In his homily during the Holy Sacrifice, Cardinal Santri placed special emphasis on the significance of the day.

At the end of the liturgy Saint Peter’s Basilica, a small group of Armenians living in Rome also joined the Holy Sacrifice, and then all of them went together to the statue of St. Gregory of Narek erected in the Vatican Gardens in 2018, for a prayer.

By the decree of Pope Francis, February 27 is celebrated in the Roman calendar as the day of remembrance of St. Gregory of Narek (Grigor Narekatsi), Archimandrite of the Ecumenical Church, the Armenian Embassy to the Holy See reports.

On February 23, 2015 the Pope awarded the title of “Archimandrite of the Ecumenical Church” to the medieval Armenian clergyman, theologian, poet St. Gregory of Narek.

33 Years After Sumgait, Anti-Armenian Hatred is on the Rise in Azerbaijan