33 Years After Sumgait, Anti-Armenian Hatred is on the Rise in Azerbaijan 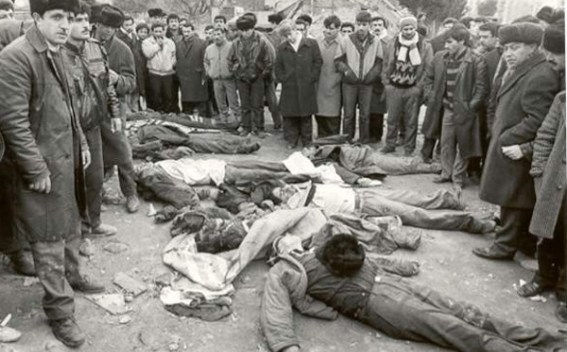 (OTTAWA – February 26, 2021) – This week, the Armenian National Committee of Canada (ANCC) is marking the 33rd anniversary of the Sumgait Pogrom, the deliberate and systematic massacre of innocent Armenians in Azerbaijan.

Beginning on February 27, 1988, in a direct response to the rightful demands of Armenians in Artskah to practice their right to self-determination and unite with Armenia, Azerbaijani nationalist forces committed heinous crimes against the Armenian minority in Sumgait.

The Sumgait massacres were a clear demonstration of deeply rooted anti-Armenian hatred in Azerbaijan that began even before the first Nagorno-Karabakh war.

The state-sponsored crimes committed in Sumgait in 1988 were left largely unpunished, emboldening Azerbaijani forces to commit further massacres against Armenians in Kirovabad (1988), Baku (1990) and Maragha (1992).

“The Sumgait pogroms and the events that immediately followed it, should have rang the alarm bells for the international community to stop Azerbaijani aggression in its tracks, however, the willful indifference from the world led Azerbaijan to commit more crimes, the last of which we witnessed during the 44 day war of aggression from September -November 2020” said Hrag Darakdjian and Shahen Mirakian, co-presidents of the ANCC.

“On September 27 last year, history repeated itself as the Azerbaijanis unleashed a full-scale war against Armenia and Artsakh. Thousands of Armenians are still refugees while Armenian POWs still remain under Azerbaijani custody. We must all learn from history and commit to standing up for justice and human rights all around the world.” said MP Bob Saroya, last Friday, during a commemorative statement in the House of Commons.

“We will continue to remember and multiply our efforts in defense of Artsakh and Armenia and to fully unmask the truth behind the criminal dictatorship in Baku” concluded Darakdjian and Mirakian.