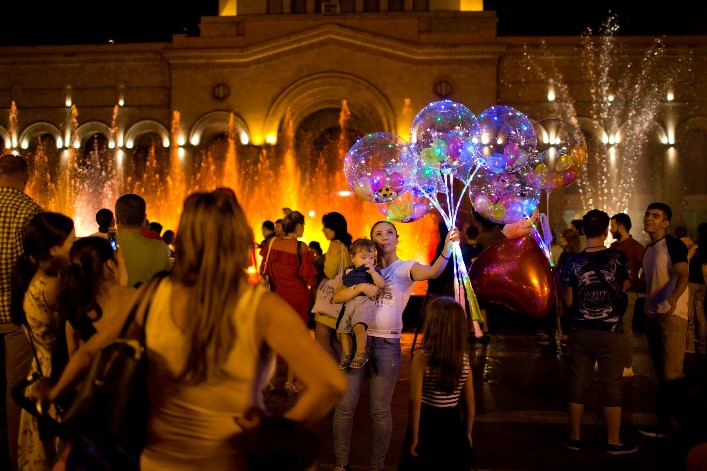 he New York Times has published an article by Pulitzer Prize-winning poet Peter Balakian, in which the author details his latest visit to Armenia, the capital Yerevan and the many changed he witnessed throughout the country.

“Each time I’ve come to Yerevan in the past decade the city has surprised me with its evolving elegance and cultural richness. The downtown has an energy that is a long way from the sleepy Soviet city I first visited in the 1980s. Walking the shady avenues off Republic Square on a recent visit, I found the city has become a hip place, with wine bars, microbreweries, cafes, art galleries, boutiques selling crafts and carpets, an ever-new array of restaurants, as well as upscale hotels and clothing stores,” Balakian says.

Like its cuisine, the poet says, the country has a long, rich history.

“Having survived a harsh history, Armenia has emerged as a democracy that cherishes the many layers of its past. Today, the capital, Yerevan — which dates to the seventh century B.C. and was founded on the walls of the Urartian city of Erebuni— is a blend of ancient culture, artisan tradition, modern architecture and high-tech, postmodern style, exemplified by the new condominiums and high-end shops on the pedestrian Northern Boulevard,” the article goes on to read.

“On Sept. 29 and 30, Yerevan will celebrate its 2,800th anniversary, making it one of the oldest cities in the world. In the ruins of the ancient fortress on Erebuni Fortress Hill, fragments of murals with images of sacred animals evoke the late Bronze Age. The Erebuni museum has a fine collection of artifacts, including a huge wine storage container that documents Armenia’s winemaking tradition from the Bronze Age.

“Yerevan is a city where many avenues are named after Armenia’s great figures: the early 20th-century poet Yeghishe Charents, the fifth-century historian Movses Koranatsi, the 19th-century novelist Katchadour Abovian, the composer Komitas (1869-1935), to name a few. It’s a city of great museums, including the Matenadaran, which has a rich collection of medieval illuminated manuscripts and books in Armenian, the National Gallery and the History Museum of Armenia.

“I always head first for the intimate museums dedicated to major figures. The Saryan museum, for example, has two floors of works by the avant-garde landscape and modernist painter Martiros Saryan (1880-1972). In a stately stone house, the Sergei Parajanov Museum is a celebration of the great 20th-century filmmaker and visual artist’s work. I always get a good workout climbing the 572 steps of the Cafesjian Center for the Arts (also known as Cascade). It’s a dramatic complex rising up from the tree-shaded, cafe-abundant Tumayan Street in five monumental limestone tiers of fountains, topiary gardens and sculptures.”

Balakian says that no one should come to Yerevan without visiting the extraordinary Armenian GenocideMuseum and Memorial, also known as the Tsitsernakaberd (meaning swallow’s fortress) Memorial Complex. It is situated on a hill that overlooks the city and Mount Ararat, Armenia’s national symbol, just across the border in Turkey.

“My travels frequently take me beyond Yerevan. Wherever you go in Armenia, you are journeying through an open-air museum where churches and monasteries, even a Hellenic temple, are built into the cliffs or perched at the edges of canyons or green gorges, with searing vistas framed by the ever-blue sky. Thousand-year-old lace-like carved stone crosses (khatchgars) emerge from fields of roadside poppies,” he says.

Because Armenia is defined by mountains, canyons, gorges, forests, rushing streams and rivers, lakes, grassy highlands and dales, it has become a prime destination for hikers, the Armenian-American poet adds, describing his visits to Goris, Sevan, Dilijan, Vayots Dzor province and a handful of other cozy corners in the mountains of the country.