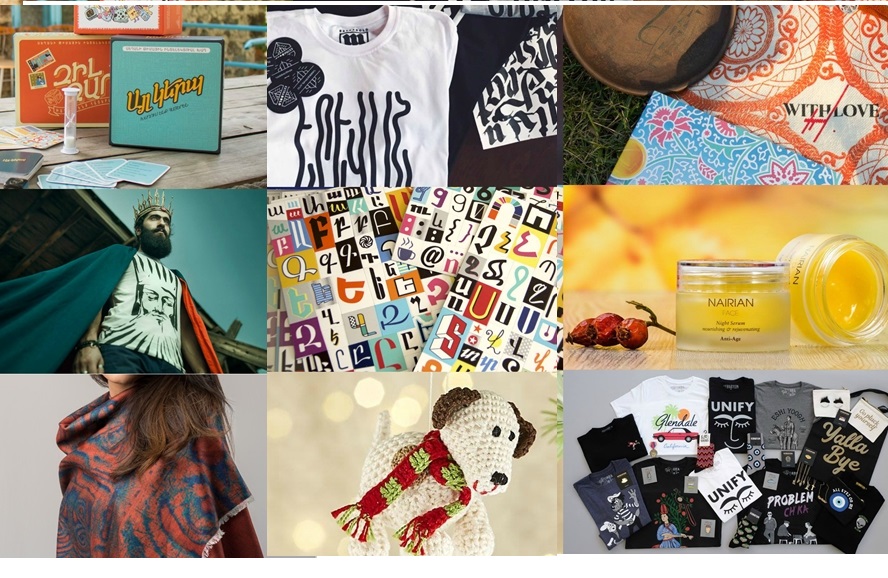 (A.W)- It can be argued that through the development stages of a country, a time comes when focus shifts to the arts. A country in the infant stages of capitalism and consumerism, Armenia is experiencing an emergence of art and commerce, revealing signs of a new generation benefiting from the resources, knowledge, and skills passed down through DNA and culture.

The growing pool of designers connected to Armenia, new tools and knowledge gained in recent years, the tech influence, the steady circulation of people in and out of the country, and the boom in art and design in neighboring Georgia all add to an atmosphere that is ripe for a movement. A new generation of freethinkers is designing products that connect their heritage to global trends, resulting in high-quality modern products that have accents of Armenian ornamentation and are globally competitive.

From Ancient to Tech-Savvy

Studios such as Ardēan, launched by the Tumo Center for Creative Technologies, reach to their roots for inspiration and demonstrate fluency in a tech-savvy world.

On its website, Ardēan describes itself as a center for art, architecture, and design based in Armenia with a taste for the authentic. The designs are inspired by Armenian architecture, cross-stones, illuminated manuscripts, and other artifacts from our rich cultural history. Established in collaboration with Tumo’s tech-savvy students and one of the center’s workshop leaders, Ardēan’s independent online shop now lists everything from scarves to pillowcases.

With the recent influx of Armenians moving back to the homeland, many have noted a new flavor in local creative industries. Proper Company was established by Syrian-Armenian graphic designer Peno Mishoyan and his local wife, marketing specialist Marianna Vardanyan. They have been disrupting the scene with new concepts and workshops, participating in creative festivals abroad as well as having European designers work with them in Yerevan.

One of their first design products to hit the market this past year is the Zanazan Magnets, which are a modern twist to the Armenian alphabet—330 unique letters, numbers, symbols, and punctuation marks, hand-drawn in “ransom note” style. This specific product has been very popular among schools from Canada to France and Russia.

apping into the Hipster Scene

Any renaissance naturally deserves its own hipster scene, and Yerevan is seeing glimpses of what’s to come. With the hip cafés and underground music scene developing, clothing gear would be next to come. With it, the design community has witnessed an influx of new, Armenian typographic experimentation. You can now see youth walking down Saryan street wearing designs made by their peers.

When promising local designer Gayane Yerkanyan returned from her studies at the Utrecht School of Arts, she thought that contemporary Armenian typography was lacking, and so she began experimenting with grid systems, used heavily by designers, to align and size objects within a given format.

She tried her new designs on T-shirts trying to get out of the typical ornamental designs. Soon enough, her friends were requesting her shirts, and now, thanks to the power of social media, she ships orders to fans from U.S. and Europe through her Extrabold Designs brand.

Other notable designers you can check out in this category include T-shirts by Ara Aslanyan, Nvard Yerkanyan’s tote bags, Liberated Co. hats, Shabeeg, Bambak hoodies, and, of course, we couldn’t leave out the local sneaker king—Yeghvard shoes!

Children are at the epicenter of Armenian culture and the future of our heritage. Anyone interested in shopping for children should check out Sharan Crafts Center, which is also available at selected department stores in the U.S., providing handmade clothes and toys to the public.

There are new resources available for today’s young learners. Armine and Ashot Hakobyan, along with their friend Henri Hovhanesyan, launched the Armenian Kids Club when they found out as parents that there was a shortage of engaging ways to help teach their kids the Armenian language. Their website now has everything from coloring books and video games to free printables in both Eastern and Western Armenian.

If you’re looking for games for a teenage crowd, look no further than Ayl Kerp, the first Armenian language board game similar to the always-popular Taboo. The game has become extremely well received in Armenia, and it isn’t uncommon to find people playing at parties and cafes in town.

Fashion design has taken the stage in recent years in Armenia and an entire article can be dedicated to names such as Vahan Khachatryan, Aram Nikolyan, Faina Arutyunyan, Diana Shatverian, Arevik Simonyan, Shadoyan, and LA-transplant Vicken Derderian, to name a few. If you’re in Armenia, a visit to their ateliers is a good way to spend an afternoon. Aram Nikolyan’s latest collection, titled Ayntap, mixes a combination of modern fashion and ancient Armenian elements, including detailed embroidery, on each garment.

For the online consumer, check out brands such as Lilit Makaryan bags and accessories, a collection inspired by the masterpiece of art on carpets and ornaments. LOOM Weaving is an Armenian knitwear brand founded in 2014 by designer Inga Manukyan. LOOM mixes Armenian handmade embroidery with modern sewing machine capacity to get an ultra-fashionable collection of cardigans, scarves, dresses, and hats.

The list is endless, but other favorite shops are Avagyan, Petoor Clothing, and Naghash.

Nairian’s line of all-natural cosmetics from Armenia is now available in all four corners of the globe, bringing the best of what the Armenia’s fertile farm land has to offer to better your health and body needs.

Delicacies from the Diaspora

And, finally, a few honorable mentions from the diaspora to add to your list.

On Dec. 1, WithLove.am, the first e-commerce curatorial service shipping annual collections of handcrafted items from Armenia to consumers in the U.S., released its third annual collection in 250 limited-edition sets. Two sold-out years demonstrate the demand for a service like this in the Armenian community, and the WithLove team happily meets this demand with its third year of operation. WithLove.am is an initiative of the Sosé and Allen’s Legacy Foundation.

If it’s Armenian design in U.S. pop culture you’re looking for, then your search ends with  talk show host Conan O’Brien, who has been spotted wearing the Yerevan shirt on his show by Los Angeles-based designer Ara the Rat. He offers a diverse selection of T-shirts in his online store, which feature Armenian themes from various time periods, served with a sense of humor.

Illustrator and artist Arpi Krikorian has become an LA-favorite for her now-iconic graphics of Armenian folk dancers that you can buy on everything from journals to shower curtains. Her products are available online and ship anywhere in North America.

Whether these singular cases will spark and evolve into a movement depends on the structures in place and investments to come. These shining examples may snowball to what we may be able to label in a few years as a renaissance in a new era for independent Armenia… or look back on what might have been. Local investment in initiatives such as Tumo Studios, launched in June of 2017, may propel and bolster such movements. Tumo Studios is one of the latest initiatives by Tumo Center for Creative Technologies, a not-for-profit educational program giving aspiring designers the opportunity to learn from accomplished design professionals and craftspeople in a hands-on workshop setting.

Each workshop aims to create innovative, contemporary products that are both globally competitive and grounded in local know-how, materials, and culture. By working closely with local craftspeople and making their work relevant to emerging design trends, TUMO Studios aims to help revive traditional craftsmanship and perpetuate the know-how passed down through generations of artisans.

Young designers will learn to work with craftspeople and to integrate their materials and techniques into products. This will, in turn, raise the quality of locally designed and produced items, making them more attractive in a contemporary global setting.

Nation-building has always been a partner effort, with the Diaspora taking part from a distance or through investments and boots on the ground. The question will be whether the gift-seeking diaspora will actually tap into the new trends coming out of Armenia and support Armenia’s economy through socially responsible consumerism.

Tania Sahakian grew up in Spain and Glendale, Calif. She is a graduate of UCLA and has worked with numerous Armenian organizations over the last decade. She repatriated to Armenia in 2011 and has been a manager at the Tumo Center for Creative Technologies since its opening.

Arsineh Valladian is an award-winning designer with education and background in the U.S., and a unique global experience that defines her style. A seasoned expert in the industry, she has served a loyal base of clientele throughout the U.S., Europe, the Middle East, and Armenia. Her niche areas of design are in typography, cartography, photography, and branding.