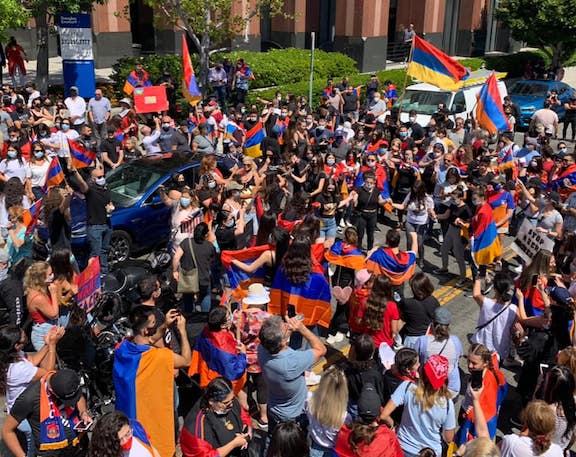 “Asbarez”- Thousands of Armenian-American community members and their allies gathered in front of the Azerbaijani Consulate in Los Angeles on Tuesday to protest the latest aggressive and brazen attacks by Azerbaijani forces, this time against military and civilian targets in Armenia’s Tavush Province. The event was organized by the Armenian Youth Federation Western U.S. Central Executive.

As Armenians were arriving at the demonstration site ahead of the 2 p.m. scheduled start time, a group Azerbaijanis, numbering less than 50, were waiting. Los Angeles Police officers escorted them across the street to prevent potential clashes, as has been witnessed in other such demonstrations this week.

However, this did not stop the Azerbaijanis from inciting violence and instigating the Armenians, as they began throwing water bottles at the arriving protesters, promoting them to cross the street. A small scuffle ensued and was quickly broken up by police. This incident forced the closure of eastbound and westbound lanes of the commonly busy Wilshire Boulevard for more than 30 minutes.

By 2:30 p.m. the crowd of Armenians, which by L.A. Police estimated numbered upwards of 3,000, swelled in front of the consulate, with patriotic songs coming through the loud speakers and demonstrators banding together to raise their collective voices against not only Baku’s military aggression but Turkey’s unequivocal support to Azerbaijan and Ankara official threats to “deal with Armenians.”

During a brief, but powerful program, the protesters heard from Raffi Hamparian, the National Chairman of the Armenian National Committee of America, as well as AYF representatives Mirna Kassamanian and Alique Cherchian who presented the day’s message in Armenian and English respectively.

The protest was in response to Azerbaijan’s ongoing attacks, beginning on July 12, of Armenian border positions that resulted in the death of four Armenian Armed Forces soldiers. Hours before Tuesday’s protest, Armenia’s Defense Ministry reported fresh fighting on the Armenia-Azerbaijan border as Azerbaijani elite forces attempted to breach the border and capture the “Anvakh” military outpost in Tavush Province, suffering heavy losses.

Since the attacks, many friends of Armenians in Congress, state legislatures and municipal offices have condemned Azerbaijan for its aggression and expressed support for Armenia’s sovereignty, calling for a return to negotiations. Once those officials, California State Senator Anthony Portantino attended Tuesday’s protest. Last week, he condemned Azerbaijan’s attacks on Armenia saying, “Having personally visited Artsakh patriots at the border, I join the chorus of voices calling on Azerbaijan to allow international OSCE monitoring, immediately end all hostility.”

The protesters’ decisive and resolute calls for justice and peace, as well as their determined condemnation of Azerbaijan, was clearly heard by those at the Azerbaijani Consulate, and those counter-protesting across the street, with their insignificant message, muted and muffled.

As the protest was winding down, one of the Azerbaijanis across the street threw a water bottle, which hit a female Armenian protester, prompting those in her immediate vicinity to charge at the Azerbaijanis. A fight broke out, during which an LAPD sergeant was unwittingly hit in the face. 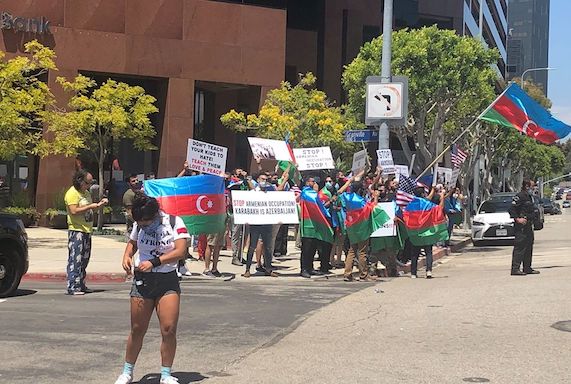 A group of Azerbaijanis gathered to instigate Armenian protesters 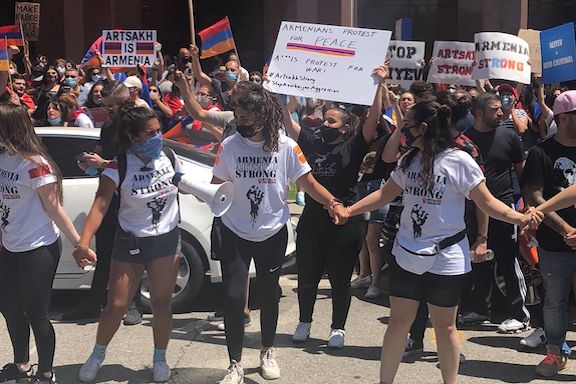