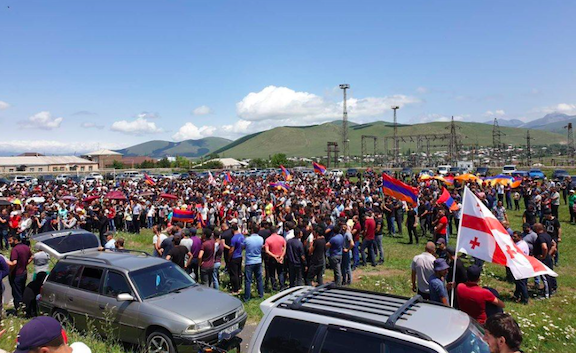 “Asbarez”- Thousands of Javakhk Armenians on Tuesday gathered at the Akhalkalak soccer stadium in Georgia on Tuesday to show their solidarity with Armenia and its Armed Forces, condemn Azerbaijani aggression against Armenia and demand peace in the region.

The participants of the gathering told the Yerevan-based Yerkir.am that through their peaceful gathering they condemned the war and military aggression by Azerbaijan, when it brazenly attacked military and civilian targets in Armenia’s Tavush Province beginning on July 12.

One of the participants also condemned threats by Azerbaijan against Georgia and its efforts to engage Georgia in their anti-Armenian campaign.

The Georgian-Armenian told Yerrkir.am that he believes Georgia and Armenia must prosper together, adding that Azerbaijan’s efforts to instigate racial clashes in Georgia are doomed to fail.

“Our peaceful gathering also carries this message,” said the Georgian-Armenian.

“Javakhk has always stood strongly with the Republic of Armenia,” said one of the clergy from the Javakhk Diocese.

“Just as during the 1988 Spitak earthquake and the Artsakh War, the same is true today: we always stand by Armenia—our heart and soul—and we declare that we are all Armenian and we are all united,” added the cleric. “Long live Javakhk, long live Armenia and long live all Armenians.”

The gathering was unprecedented given Georgia’s strict guidelines to combat the coronavirus pandemic, becoming the first of such gatherings in Georgia.

During the gathering, which took place under the slogan of “No to War” Armenian songs could be heard, with participants taking part by dancing and singing patriotic songs.