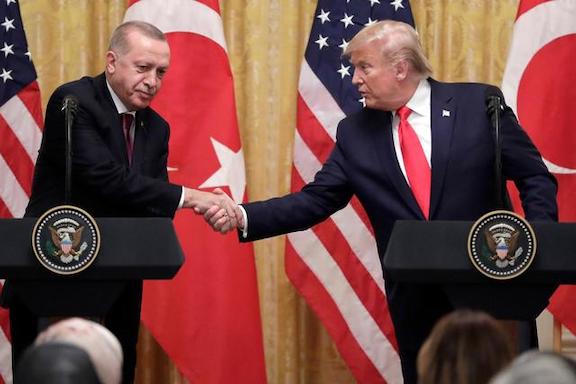 “Asbarez”, WASHINGTON—In the wake of last year’s near-unanimous recognition of the Armenian Genocide by the House and Senate, President Donald Trump has chosen to close out his first term in office – isolated and alone – as the last remaining American enforcer of Ankara’s gag-rule against honest U.S. remembrance of this crime, a move sharply condemned by the Armenian National Committee of America.

For four straight years, President Trump failed to properly condemn as ‘genocide’ the Ottoman Turkish government’s annihilation of millions of Armenians, Greeks, Assyrians, Chaldeans, Syriacs, Arameans, Maronites and other Christians in his annual April 24th commemorative statement – despite having campaigned on a promise to stand up for persecuted Christians and other at-risk faith-based groups around the world.

“Armenian Genocide denial is a policy manufactured in Ankara, exported to America, and enforced in Washington by President Trump,” said Armenian National Committee of America ANCA Executive Director Aram Suren Hamparian. “Once again, President Trump copied and pasted the transparently euphemistic, patently offensive April 24th evasions issued by Barack Obama and his other predecessors – essentially isolating his Administration as the last major American co-conspirator in Turkey’s obstruction of justice for the Armenian Genocide.”

“Despite last year’s near-unanimous Congressional recognition of the Armenian Genocide, President Trump has, once again, granted Turkish President Erdogan – an openly anti-American dictator – a veto over honest U.S. remembrance of Turkey’s WWI-era genocide of millions of Armenians and other Christians.”

“Having promised an America First presidency, President Trump has pursued a Turkey First policy on the Armenian Genocide. Having pledged to protest the persecution of Christians abroad, he has enforced a foreign gag-rule against honest remembrance of this crime against millions of defenseless Christian martyrs. Having vowed to restore U.S. leadership, he has, instead, outsourced American human rights policy to a foreign dictator.”

The President’s full statement is provided below.

Statement by the President on Armenian Remembrance Day

Today, we join the global community in memorializing the lives lost during the Meds Yeghern, one of the worst mass atrocities of the 20th century.  Beginning in 1915, 1 and a half million Armenians were deported, massacred, or marched to their deaths in the final years of the Ottoman Empire.  On this day of remembrance, we pay respect to those who suffered and lost their lives, while also renewing our commitment to fostering a more humane and peaceful world.

Every year on April 24, we reflect on the strong and enduring ties between the American and Armenian peoples.  We are proud of the founders of the American Committee for Armenian and Syrian Relief, a ground-breaking effort established in 1915 that provided crucial humanitarian support to Armenian refugees, and grateful for the thousands of Americans who contributed or volunteered to help Armenians expelled from their homes.

On this day, we bear witness to the strength and resiliency of the Armenian people in the face of tragedy.  We are fortunate that so many Armenians have brought their rich culture to our shores and contributed so much to our country, including decorated soldiers, celebrated entertainers, renowned architects, and successful businesspeople.

We welcome efforts by the Armenians and Turks to acknowledge and reckon with their painful history.  On this day, we believe it is our obligation to remember those who suffered and perished and reaffirm our commitment to protecting vulnerable religious and ethnic minorities around the world.