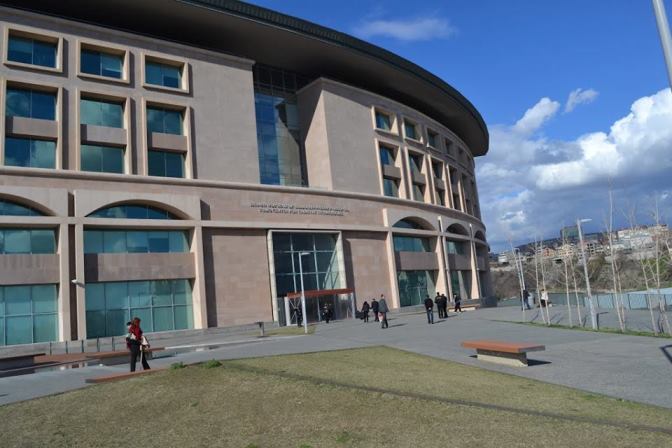 As part of TorontoHye Newspaper’s cooperation with TUMO Center for Creative Technologies in Yerevan, we had an interview with Camp TUMO coordinator Ani Gharabaghtsyan.

TUMO is considered one of the most advanced learning centers in the world. Tell me more about it’s structure and courses.

-TUMO is a free of charge, after school learning center which gives students the opportunity to learn the latest in arts and technology. There are currently four centers in Armenia and the Republic of Artsakh.

The after-school learning process at TUMO is based on a highly versatile but rigorous system. Members advance through our program based on their individual preferences and at their own pace. Within that flexible framework, they work towards very specific learning targets organized around four focus areas.

TUMO members are initially encouraged to get exposure to all four of these areas. As they progress through the curriculum, completing a succession of increasingly challenging projects, members begin to concentrate on one of the four areas and work towards completion of a final project at the end of a two-year cycle. In addition to instruction in its main focus areas, the TUMO curriculum covers a set of supporting technical, artistic and professional skills that are essential across all four areas.

Besides, at any given time, TUMO members have access to a wide range of workshops in our four focus areas and the supporting technical, artistic and professional skills. Workshops range from the beginner to the advanced, culminating in intensive project workshops. These are highly challenging team efforts that aim to produce work for submission to competitions and festivals, or publication in online venues and app stores.

Last come Learning Labs. The learning experience at TUMO is punctuated by a variety of ad hoc events that are both internal and open to the public. These are designed to stimulate, challenge and inspire members, as well as to further involve the local communities in TUMO activities. We host a number of exhibitions throughout the year and invite specialists to give lectures on topics related to the TUMO curriculum

2-How many students have so far learned or currently enrolled at the centre?

–14,000 students have so far learned at TUMO. Currently, 10,000 active students are enrolled in all four centers.

3-TUMO opened branches in some regions of Armenia and in Stepanakert. Tell us about the activities of these offshoots.

-In January 2013, with the support of the Central Bank of Armenia, TUMO launched its free of charge program in Dilijan, a resort town in northern Armenia. The center operates in the Knowledge for Development Center, the local library building reconstructed by the Central Bank. Currently, there are 400 active students enrolled at TUMO Dilijan.

TUMO partnered with the Armenian General Benevolent Union to open a branch in Gyumri, the second largest city in Armenia. Following a fundraising initiative by Shant TV, TUMO opened its doors in May 2015. Currently, there are 1800 active students enrolled at the branch. ​As a result of continued cooperation with the Armenian General Benevolent Union and support from Karabakh Telecom, the newest TUMO branch opened in Stepanakert in the Republic of Artsakh in September 2015. Currently, there are 1100 active students enrolled at Stepanakert centre.​

​All the 4 centers follow the exact same educational curriculum – with the exception of Camp TUMO, which only takes place at TUMO Yerevan.​

4-How can an Armenian student from diaspora benefit from this extraordinary learning environment in the homeland?

–For the fifth year in a row TUMO organizes Camp TUMO summer program for teens from all around the world. Camp TUMO gives teens from around the world the chance to take part in the innovative TUMO educational program where they can learn animation, filmmaking, web development and game development at TUMO’s state-of-the-art facilities and with teachers from around the world. They can also build on these areas by mastering a range of complementary skills such as robotics, photography, drawing or 3D modeling. By the end of just one week, TUMO campers will have learned enough to complete their own project in in their chosen area. The campers also tour parts of the country, go to museums and compete in some friendly athletic competition. Camp TUMO is an experience unlike any other

5-What’s the goal of TUMO summer camp? and what do students learn at the camp?

-Camp TUMO takes the TUMO program and fits it into jam-packed weeks filled with learning and adventure. From June 19 to July 29, 2017, students take part in high-intensity versions of TUMO’s workshops and learning labs, tour some of the breathtaking sites of Armenia, rub elbows with notable professionals in the country and make lifelong friends in the process. Participants can choose to stay for just one week and all the way to a full six weeks. Each week has unique lessons and activities, so each week a student participates provides an opportunity to add to their knowledge, expand their skill sets and deepen their experience.

But perhaps most importantly, teens see a modern Armenia that is on the cutting edge of art and technology. With Camp TUMO, Armenia becomes the place where they learn to build robots, design video games and work their way to becoming the innovators of the future.

6-How many students from diaspora have so far taken part in TUMO summer camps? How’s the best way to apply?

-Around 500 teens have so far taken part in Camp TUMO program over these years. Year by year the number gets bigger.

The best way to apply is through our website www.tumo.org/camp where they can fill in the online application and save their spots.