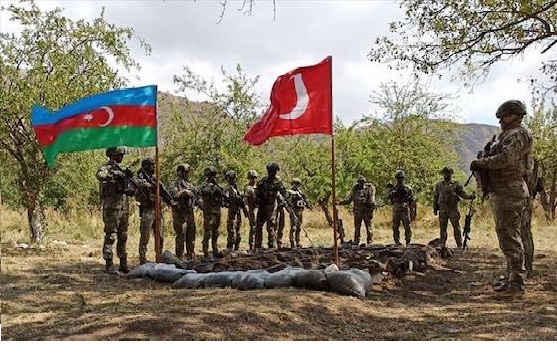 Turkish and Azerbaijani soldiers during military drills in Lachin on Sept. 6

(Asbarez)- Armenia on Tuesday called joint military drills by Azerbaijan and Turkey in Artsakh’s Kashatagh (Lachin) region deplorable and an effort to derail de-escalate hostilities in the region.

The armed forces of Turkey and Azerbaijan on Monday began joint tactical exercises that included firing of weapons in the portion of the Kashatagh (Lachin) region that was surrendered to Azerbaijan following the November 9 agreement.

In a statement, Azerbaijan’s Defense Ministry said the main objective of the exercises, “held with the participation of  Azerbaijani and Turkish servicemen, is to improve interaction and combat coordination during military operations, including the development of commanders’ skills in making military decisions and managing subunits. Particular attention is paid to improving the  skills of using modern military equipment and other military  equipment in difficult terrain.”

Monday’s exercises were the first to take place in territories that came under Azerbaijani control as a result of the November 9 agreement.

“We regard the conduct of the Turkish-Azerbaijani military exercises near the borders of Armenia, Artsakh and the Lachin corridor as an action damaging de-escalation steps … and undermining efforts to establish a lasting peace, security, and stability in the region,” Armenia’s Foreign Ministry spokesperson, Vahan Hunanyan, said in written comments.

“This action does not correspond with the spirit of the November 9, 2020, trilateral statement and is disrupting efforts to establish lasting peace, security, and stability in the region,” Hunanyan told Sputnik Armenia.