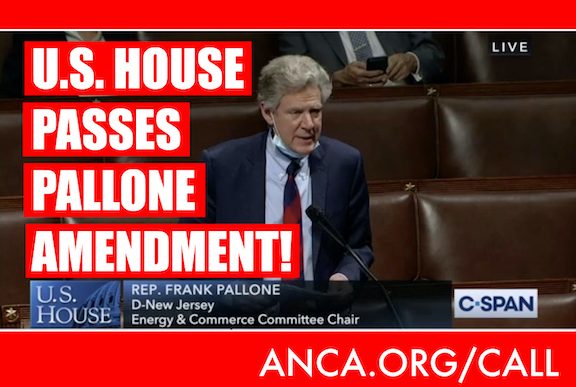 Congressional Armenian Caucus Co-Chair Frank Pallone led the House amendment calling for broader oversight on the defense program through which Azerbaijan has received over $100 million in U.S. military assistance.

WASHINGTON, —The U.S. House of Representatives overwhelmingly passed an amendment by Congressional Armenian Caucus Co-Chair Frank Pallone (D-NJ) Monday which calls for greater Congressional oversight over a U.S. military aid program under which Azerbaijan has received over $120 million in U.S. defense assistance, reported the Armenian National Committee of America.

Monday’s vote comes just a week after Azerbaijani President Aliyev launched the deadliest attack against Armenia since the 2016, resulting in the death of over 16 soldiers, the shelling of an Armenian kindergarten and other civilian targets, and Azerbaijani threats to bomb Armenia’s Metsamor nuclear power plant.

“We thank Congressman Pallone, Sherman, Speier, and Schiff for demanding transparency and accountability from the Administration regarding its reckless arming of an increasingly hostile and virulently anti-Armenian Aliyev regime,” said ANCA Executive Director Aram Hamparian. “Armenian Americans deeply appreciate the strong leadership of the Armenian Caucus on the full range of policy priorities of concern to our Congressional friends, community partners, and coalition allies.”

The Pallone Amendment to the National Defense Authorization Act (NDAA – H.R.6395), which was cosponsored by Representatives Brad Sherman (D-CA), Jackie Speier (D-CA), Adam Schiff (D-CA), requires that the Defense Department submit a report to Congress on a U.S. military aid program (known as Section 333) that has sent over $120 million worth of defense assistance to Azerbaijan over the past several years. Congressman Pallone shared the importance of his amendment during an “ANCA Congressional Corner” video interview with Government Affairs Director Tereza Yerimyan last week.  Rep. Sherman spoke in support of the amendment during floor consideration noting Azerbaijan’s gross human rights violations committed during its aggression against Artsakh and Armenia.

Congressional Armenian Caucus concerns regarding the U.S. Defense Department decision to break the parity in military aid between Armenia and Azerbaijan have been raised repeatedly – most recently in May, 2020, when Congressional leaders shared “grave concerns” about Baku’s large-scale military exercises.  In a letter to Secretary of State Pompeo and Secretary of Defense Esper, Rep. Pallone and 17 of his Armenian Caucus colleagues expressed concern about a $100 million allocation in U.S. security assistance to Azerbaijan, noting that “the aid appears to have allowed Azerbaijan to shift resources toward offensive capabilities and further threaten Armenian lives and regional stability as the Co-Chairs of the Congressional Caucus on Armenian Issues warned in letters sent to you in September and November of 2019.”

The Pallone amendment was one of four amendments to the NDAA dealing with Azerbaijan.  An amendment led by Representative Brad Sherman, placing restrictions on U.S. defense transfers to Azerbaijan, and another by Rep. Jackie Speier (D-CA), restoring parity in U.S. military aid to Armenia and Azerbaijan, were not considered, based on a decision by the U.S. House Rules Committee.

An amendment, advanced by Congressional Turkey Caucus Co-Chairs Steve Chabot (R-OH) and Stephen Cohen (D-TN), was adopted.  The Chabot-Cohen amendment calls for a report on the status of internally displaced persons in Ukraine, Georgia, Moldova, and Azerbaijan, conspicuously leaving out the hundreds of thousands of refugees forced out of Azerbaijan as a result of the Sumgait and Baku massacres and ensuing Azerbaijani aggression. The amendment also fails to address Azerbaijan’s ongoing cease-fire violations, including the latest attacks against Armenia. The ANCA has registered its strong opposition to the amendment.

The House vote on the National Defense Authorization Act, to which the Pallone amendment was added, will take place as early as Tuesday, July 21st.  A Senate vote on its version of the NDAA is expected soon.  The final bills passed by the two chambers will then enter a reconciliation process, with a final vote likely in November.