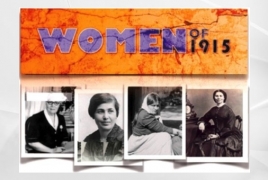 The Armenoid Team announced on October 21 that the award-winning filmmaker, Bared Maronian’s opening sequence of “Women of 1915” documentary has been nominated by the National Academy of Television Arts and Sciences (NATAS) 40th Annual Suncoast Regional Emmy Awards among its Craft Achievement Nominees for directing. Already a four-time Emmy award winner, this is Maronian’s first Emmy nomination as a director.

“I’m honored and grateful to be among the 2016 NATAS nominees—for the first time as a director,” said Maronian.  “My heartfelt gratitude to my sponsors and the entire Armenoid Team without whose continued support and expertise the production of ‘Women of 1915’ wouldn’t have been possible.f

“Women of 1915” premiered in New Jersey in June, under the sponsorship of the Armenian Relief Society (ARS) of the Eastern United States—a non-profit women’s organization—and also premiered in Sydney and Melbourne, Australia, sponsored by the Armenian General Benevolent Union (AGBU). The documentary has already been awarded the Armin T. Wegner Humanitarian Award—and accepted into the following upcoming film festivals: