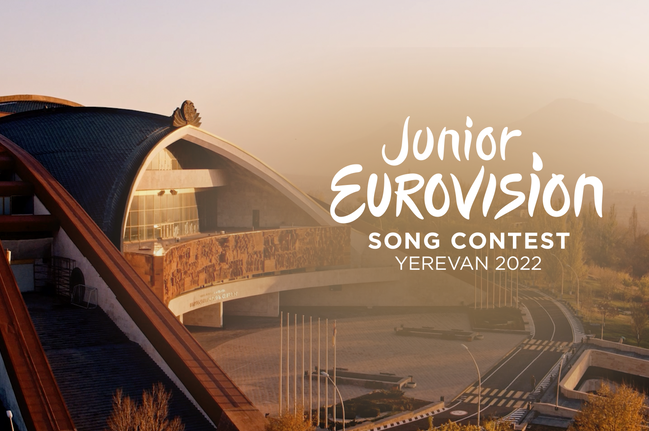 (Armradio)- The European Broadcasting Union (EBU) and its Armenian Member AMPTV are pleased to announce that the 20th Junior Eurovision Song Contest will take place in the Karen Demirchyan Sports and Concerts Complex, in Yerevan, Armenia, later this year.

The hosting follows Maléna’s sensational win in Paris at the 2021 Contest last December with her whirlwind of a song Qami Qami.

The 20th anniversary Contest, which will feature young artists between the age of 9 and 14 from around Europe, will take place on Sunday 11 December,

Hovhannes Movsisyan, CEO of Armenian Public Television said: “It is an honour to host the 20th edition of the Junior Eurovision Song Contest in Yerevan – one of the most ancient and iconic cities in the world.

“We are excited to work together with the EBU and our partners from public service media across Europe to create an unforgettable journey for our young talents and a state of the art television show for millions of viewers all over the globe. We will spare no effort to make sure that we create magic for the young participants and viewers, and we look forward to welcoming you all to Yerevan later this year.”

Yerevan will host the Contest for the second time, having previously done so in 2011 following Vladimir Arzumanyan’s win the previous year with his song Mama. In fact, Armenia is one of the most successful countries in the history of the Junior Eurovision Song Contest, having entered on 14 occasions and never finishing lower than 9th.

A commitment to the show that Martin Österdahl, Executive Supervisor of the Junior Eurovision Song Contest, notes: “Armenia’s cool, classy and contemporary winning song set a new standard for Junior Eurovision, and we’ve no doubt that excellence will be reflected in the quality of show AMPTV are producing in this special anniversary year.

“We look forward to working with our colleagues in Armenia, and can’t wait for them to showcase the unparalleled enthusiasm and passion that we know Yerevan has for Junior Eurovision.”

More details of the event will be released in the coming months.

At Least 23 Armenians Have Died in Ukraine Conflict