Yerevan City In Armenia Is A Jewel For Travel, Food And Wine 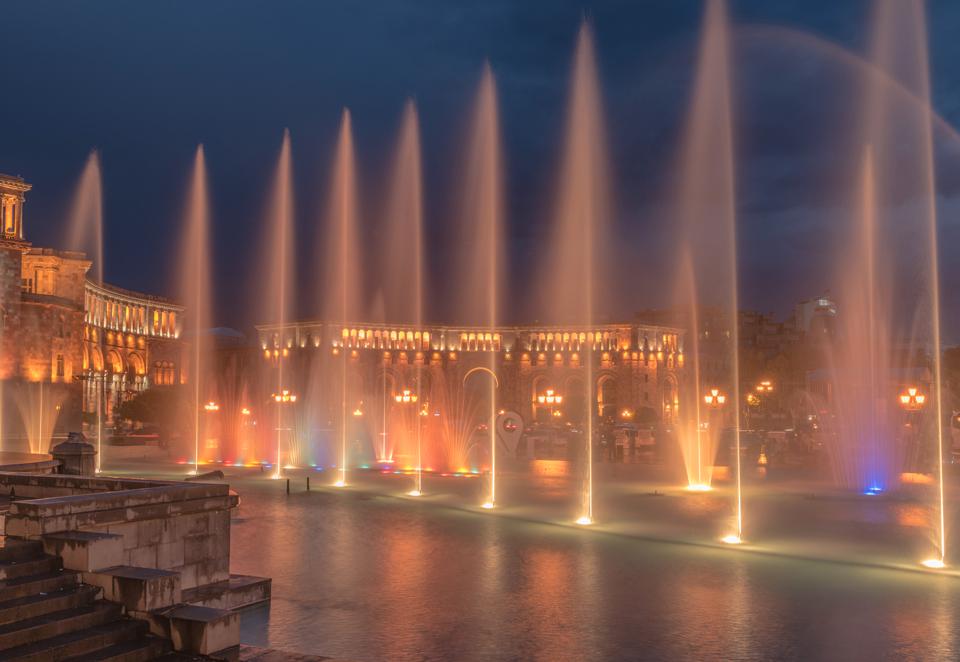 (Forbes)- Yerevan, Armenia, is generally a safe, friendly and vibrant city with attractive architecture and rich history. Nicknamed the ‘pink city’ because of the color of volcanic tufa rock from which many buildings are constructed, this is a city where strolling allows you to see plenty. (Statistics from mid-2019 indicate that the city is comparably as safe as Reykjavik or Helsinki.)

Begin at the Cascade Complex, a massive limestone stairway built in 1980 that joins two segments of the city. This also houses an arts center and more than a half dozen internal escalators for those not wanting to climb the 500 plus steps on foot. The journey is punctuated by five levels with rest points from where you can view the city, and the associated architecture when lit up at night is especially attractive. 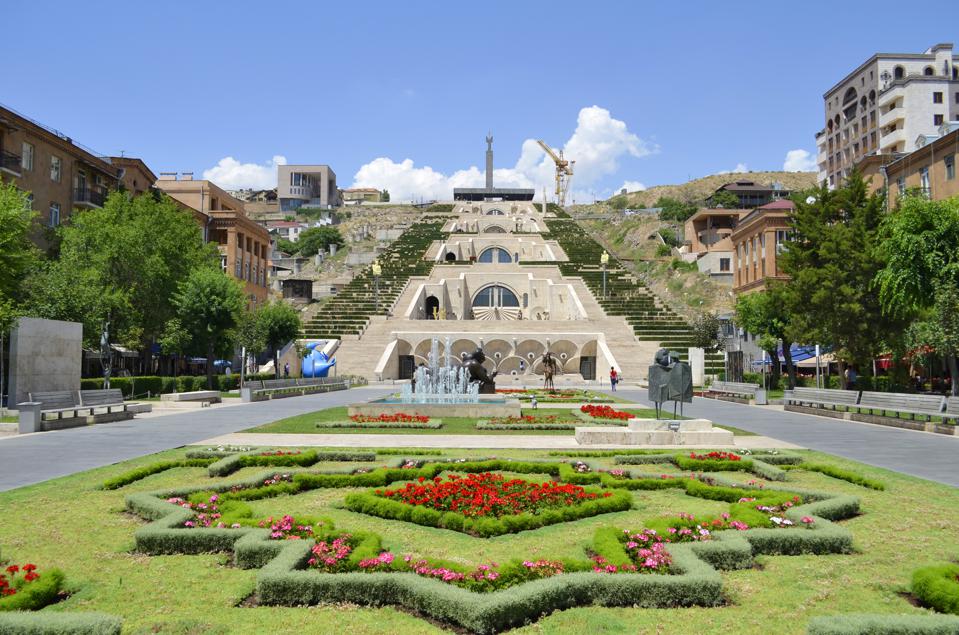 Before the Cascade is a statue of Alexander Tamanian (1878-1936) an architect who moved to Yerevan to create a plan for the modern city (highlighted in stone relief on ground adjacent to his statue). He also designed the city’s opera house.

From the base of the Cascade walk past the adjacent, handsome Armenian Opera Theater. From there it’s a half hour walk to Republic Square, which is actually oval—bordered by parliament buildings, Shahumyan Park and ‘Singing Fountains.’ But on your way to this square, detour to stroll along Pushkin Street past Dolmama Restaurant—where an ancient grape vine still grows inside. Dolmama has hosted both Boris Yeltsin and Hillary Clinton (not, apparently, at the same time) as well as Gérard Depardieu, Michael Caine, George Clooney, the Prince of Wales, Kanye West, Julio Iglesias and other luminaries.

Winemaker Alina Mkrtchyan of Voskeni Wines told how the wine scene in Yerevan exploded in popularity during the past five years.

“Ten years ago, people drank beer and vodka. Now they drink a lot of Armenian wine. In May we have Yerevan Wine Days. A big festival, with visitors from Russia, the U.S., Austria, France, Thailand, Japan, China. Everywhere.”

To discover the roots of this festival, walk to where Pushkin Street T-junctions with Martiros Saryan Street. This is nicknamed ‘wine street’ because it is closed only to pedestrian traffic for Yerevan Wine Days—a two-day, free festival focused on showcasing national food and some 200 Armenian wines. The event includes music and traditional dances.

Choosing Saryan Street for this event is linked to the city’s first wine bar—In Vino—which opened six years ago (today there are more than a half dozen wine bars in Yerevan). Inside I spoke with one of its founders—Vahe Baloulian—who is also a co-owner of Trinity Canyon Vineyards. Previously, Vahe had worked as a management consultant and lived in Los Angeles in the U.S., as well as in Antigua, Costa Rica, Austria and Canada. 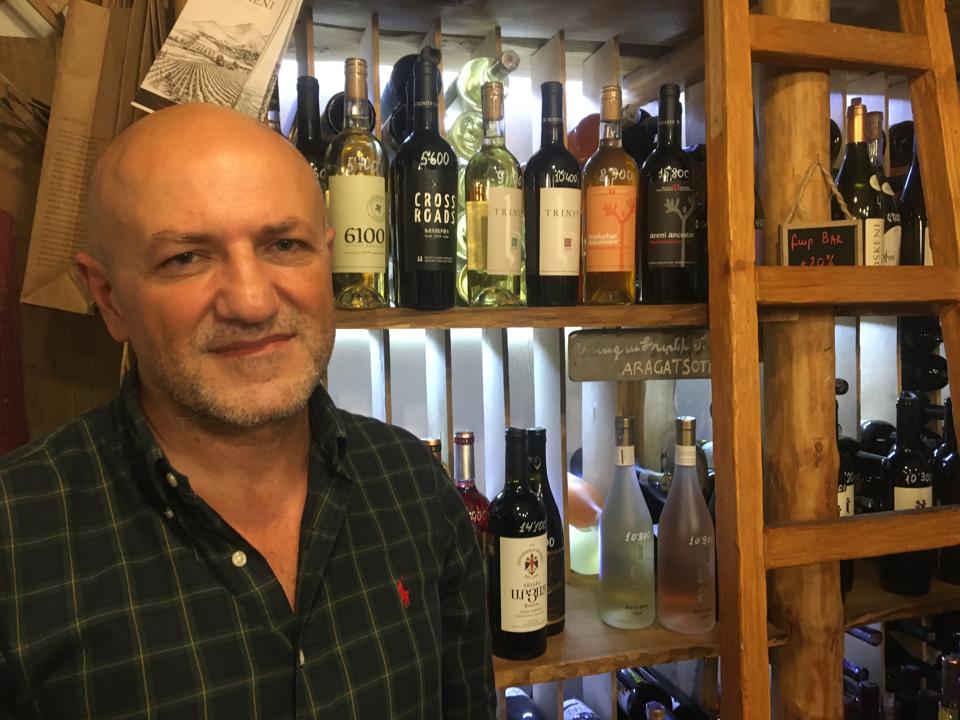 “We had a restaurant here and wanted to sell wine because we didn’t like vodka. Back then there were no places we could go to drink proper wine. Everywhere served vodka, cognac, beer. We couldn’t find a lot of good Armenian wine then, so in 2009 we established our own vineyards. I then said, let’s open this small wine store. Everyone was making fun of us. Even the distributors said, ‘You are crazy because nobody drinks wine in Armenia and you’re going to go under and lose everything.’ We had tastings, classes, introductions. A lot of things that Total Wine does. That’s how it started. This was a small dark street with a few computer shops and this wine bar. But people were happy, and we were surprised. This wine bar was a catalyst which introduced everyone to this culture. People said, ‘I could be sitting in Italy or France here—but instead it’s in Yerevan.’

“The future is bright for the country. I think wines of Armenia are going to surprise the world with their quality and their uniqueness when people start to discover them. It’s going to be niche in some ways, but a very beautiful, delicious niche.”

I drank his zesty 2018 Trinity Eh Voskehat white wine. The bottle’s back label includes a quote from Matthew 10:16: ‘…be wise as serpents and innocent as doves.’ Biblical references or drawings on Armenian wine bottles is not unusual; more than 90% of the country’s population is Christian.

Sitting inside In Vino wine bar is reminiscent of visiting a rural Italian bar in the 70’s or 80’s—without the smoke and dim lights, but with the Dylan tunes, jean-jacketed, long-haired and spirited youth, organic and wooden interior architecture, dishes of charcuterie and the constant music of popping corks. It is a lair for melding, toasting, bantering, scheming, celebrating. Here I met a poet who just published her first book (and watched the TV series ‘Friends’ five times to learn about New York City) as well as a winemaker who was departing to meet the country’s president. Such casual encounters with artists and influencers is not unusual in this bar, or in the city with a million residents and five millennia of history. Parts of Armenia’s capital still pulse with the intimacy of a village.

Food in the city is served mezze style and many plates bulge with vegetables. Dishes include ghapama—a festival dish of pumpkin stuffed with rice, apples, honey and raisins; lahmacun—Armenian pizza, without cheese; khorovats, or barbecued vegetables, and gata—a pie with nuts and honey. Beef and lamb kebabs are also ample.

Consider attending a festival if you visit. The Golden Apricot Yerevan International Film Festival, as well as the Raspberry Festival, are both in July, while the Barbecue Festival (located in Lori province) is in August.

City temperatures hover at freezing during winter and reach the mid 90’s (35 degrees Celsius) during summer. The city also has a small (10 station) underground metro, built by Soviet engineers.

There are non-stop flights from 20 countries to Yerevan’s Zvartnots International Airport (including a direct, 4-hour 40-minute flight from Paris). U.S. citizens can enter Armenia without a visa and stay for up to 180 days.