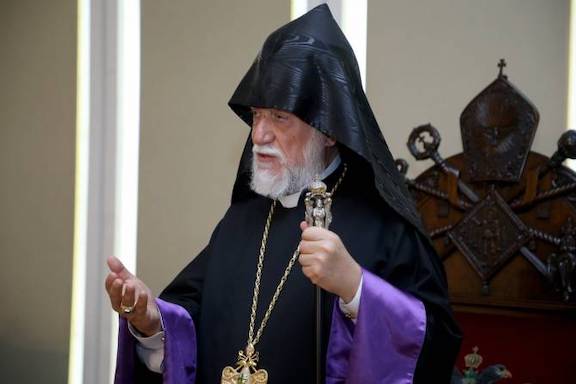 Aram I, Catholicos of the Great House of Cilicia

Amid unconfirmed reports that Prime Minister Nikol Pashinyan will meeting the presidents of Russia and Azerbaijan on Monday in Moscow, where he is reportedly going finalize details of the November 9 agreement, His Holiness Aram I, Catholicos of the Great House of Cilicia urged official Yerevan to not sign any agreements that would further endanger Armenia’s statehood and territorial integrity.

The pontiff cautioned that the immediate salvation and protection of the Armenian state must be held above all other considerations.

“As we mentioned on the day, the declaration to end the war unleashed by the Azeri-Turkish army against Artsakh contains several vague and ambiguous points that could endanger the security, independence and territorial integrity of the Armenian state,” said Aram I in a statement issued by the Catholicosate on Saturday.

“The dangerous points of the ceasefire declaration should be clarified at the request of Armenia and with the support of Russia. The strong and secure preservation of the territorial integrity of Armenia and the state is an indisputable National matter,” added the Catholicos.

“At critical junctures throughout our centuries-old history and in the face of dangers threatening the existence of our nation and the homeland, our people have voiced their ‘no’ at the cost of every sacrifice,” explained Aram I.

“We do not know the details of the agenda of the Putin-Pashinyan-Aliyev meeting to be held on January 11 in Moscow. It is our demand—we believe also our people’s—that Yerevan should not endanger Armenia’s sovereignty, statehood and territorial integrity by signing any agreement.”

Yerevan City In Armenia Is A Jewel For Travel, Food And Wine