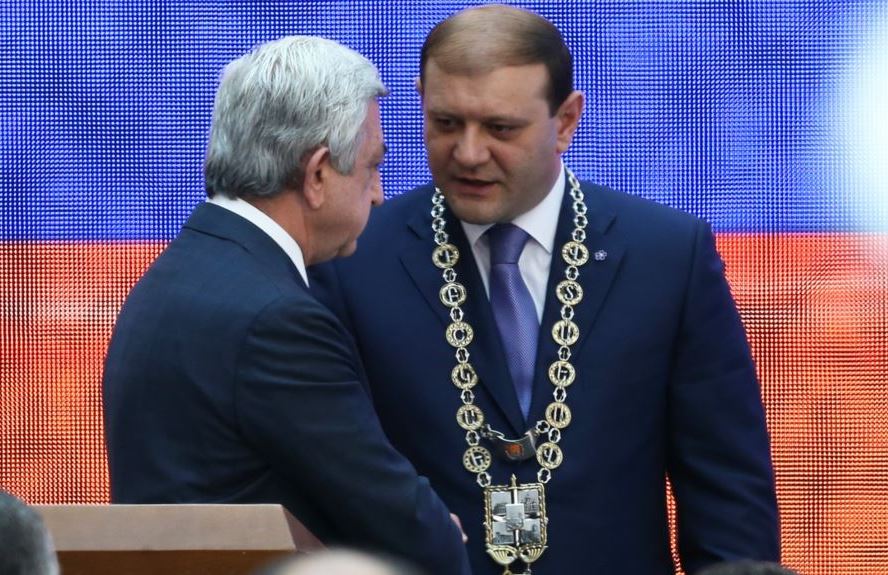 (Azatutyun).- Yerevan’s Mayor Taron Markarian was sworn in for another four-year term on Monday one month after leading the ruling Republican Party of Armenia (HHK) to a landslide victory in municipal elections.

Markarian, in office since 2011, vowed to “honestly and diligently perform the mayor’s duties” at an inauguration ceremony attended by President Serzh Sarkisian, Prime Minister Karen Karapetian and other top officials.

According to the official results of the May 14 elections, the HHK won more than 70 percent of the vote that gave it 46 of the 65 seats in the municipal council empowered to appoint the city’s mayors. The opposition Yelk alliance finished second with 14 council seats.

A more radical opposition group, the Yerkir Tsirani party, gained the remaining 5 seats. It decided not to boycott sessions of the Yerevan council after accusing the HHK of buying votes and resorting to other serious irregularities. The Central Election Commission (CEC) rejected last month Yerkir Tsirani’s demands to annul the official vote results.

Unlike their Yerkir Tsirani colleagues, the 14 council members representing Yelk chose to attend Markarian’s inauguration. But they demonstratively refused to stand up when Sarkisian entered a conference hall where the city council holds its sessions.

In a speech at the ceremony, Sarkisian gave a largely positive assessment of the 38-year-old mayor’s track record, while urging him to do more to address Yerevan’s lingering problems and a lack of adequate public transportation in particular.

“You must work day and night in order to increase Yerevan residents’ respect and trust towards you, maintain you position as the most popular political figure in Yerevan, get even more votes in the next elections and continue to run Yerevan,” the president said.

More Armenian Companies To Be Privatized