Zoryan Institute Releases New Book on Fate of Non-Muslims and Christians in Turkey 1913-1923, Contextualizing Issues in the Middle East Today 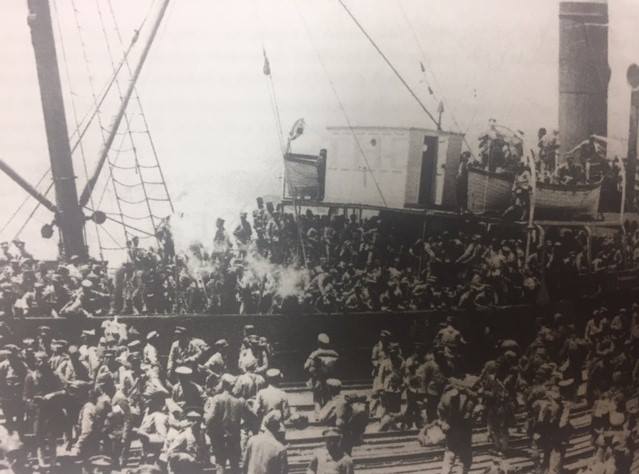 “When one sees what is happening in Turkey right now, how Turkey is dealing with its own minorities, the type of language that the President of Turkey is using in regards to non-Muslim Europe, it all reflects the same narrow, ethno-religious nationalism that prevailed there 100 years ago. It is being used today by the President of Turkey to mobilize masses to fulfill his political objectives.

In fact, the non-Muslim groups combined, including Armenians, Assyrians, Greeks, and Jews, now make up only around 100,000 of Turkey’s population, as opposed to 4.5 million in Ottoman Turkey before the Genocide.” So says George N. Shirinian, editor of a new book titled, Genocide in the Ottoman Empire: Armenians, Assyrians and Greeks, 1913-1923.

Shirinian explained what message he wished the reader to take away from this book, which is also part of his own personal history: “Being the son of two orphan survivors of the Armenian Genocide, I was always very aware of the devastating effect the Genocide has had on Armenians, and it always bothered me to read in some books that it took place as a legitimate reaction by the Ottoman state to a so-called Armenian revolt against the whole Ottoman Empire. I began to undertake research years ago to verify if this was true, and to understand what the causes of the Armenian Genocide were.

Through my years of research and the preparation of this book, what I would like for the reader to understand is that some 4.5 million people, primarily Armenians, Assyrians and Greeks, were either killed or uprooted from their ancestral homes during a short, ten-year period. This is essentially because they were non-Turks and non-Muslims. There were numerous factors that led to these genocides, but it is now clear that the alleged Armenian revolt was a fabrication of the Young Turks to stir up their own citizens against the Armenians, to provide a justification to their German allies so they would not intervene, and to keep the neutral but very engaged Americans from interfering. This becomes especially clear when you see that the Young Turks also deported and massacred the Assyrians and Greeks, who definitely were not part of any alleged revolt.”

Shirinian continues: “The Young Turks believed that a policy of “Turkey for Turks” would solve their political problems, thus they adopted an ultra-ethnic, nationalist attitude towards the non-Turks. This attitude may be compared to the attitude of ISIS today. Driven by extreme Sunni radical Islamic nationalism, they draw on religious fanaticism and use it to stir up those who are susceptible to kill Christians, Yezidis, and even other Muslims who are not Sunni.”

This mindset of “Turkey for Turks” only is best exemplified by statements by the president of Turkey today, and as far back as when he was Prime Minister in 2004: “Turkish Prime Minister Recep Tayyip Erdogan has warned European Union leaders that violence from Islamic extremists could escalate if the EU rejects Turkey as a member.” A more recent example is the following from March 17, 2017: “…The place in which you are living and working is now your homeland and new motherland. Stake a claim to it. Open more businesses, enroll your children in better schools, make your family live in better neighborhoods, drive the best cars, live in the most beautiful houses. That’s because you [the Muslim Turks] are the future of Europe. It will be the best answer to the vulgarism, antagonism, and injustice made against you.”

George N. Shirinian was asked by the Asia Minor and Pontos Hellenic Research Center in Chicago, to prepare and to edit a multi-author book on the genocide of the Armenians, Assyrians and Greeks in the Ottoman Empire, with contributions by fourteen specialists , including his introduction and the first chapter. This book is relevant today because it contextualizes what is happening in the Middle East now with the events of history.

George N. Shirinian is the Executive Director of the Zoryan Institute. In addition to this new book, he is also the co-editor of Studies in Comparative Genocide (Macmillan 1999) and editor of The Asia Minor Catastrophe and the Ottoman Greek Genocide: Essays on Asia Minor, Pontos, and Eastern Thrace, 1913-1923 (Asia Minor and Pontos Hellenic Research Center 2012).