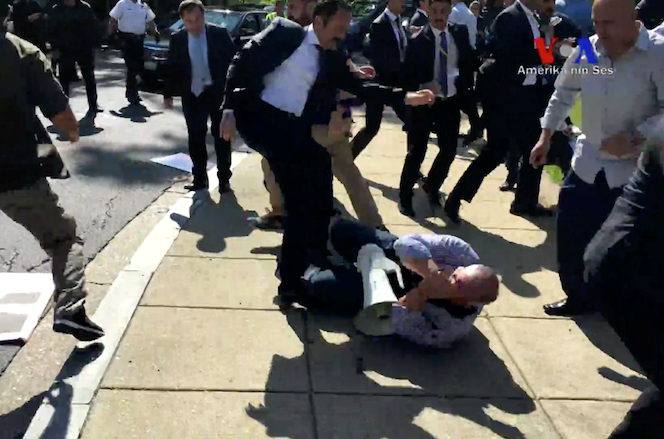 WASHINGTON—A grand jury in the United State. capital issued indictments against 19 people, including 15 members of Turkish President Recep Tayip Erdogan’s security detail, for their brutal May 16th attack against peaceful protesters gathered in front of the Turkish Ambassador’s residence in Washington, DC, reported the Armenian National Committee of America (ANCA).

“Today’s indictments are an important step toward securing justice for the vicious, ethnically motivated hate crimes committed against U.S. citizens, carried out during President Erdogan’s visit to the nation’s capital in May,” said ANCA Communications Director Elizabeth Chouldjian. “For far too long, the U.S. has succumbed to Erdogan’s intimidation tactics, remaining complicit in Turkey’s denial of the Armenian genocide; refusing to clearly condemn the growing repression against the Kurdish community; and turning a blind eye to the crackdown on free speech within their own borders.  Now is the time to demand the immediate extradition of President Erdogan’s security detail, and for the Republic of Turkey to pay reparations to the victims of these heinous crimes.  Erdogan’s failure to take these concrete steps in the furtherance of rule of law and justice, must result in the immediate expulsion of Turkey’s Ambassador to the U.S. and any additional sanctions available.”

Sixteen of the defendants were already charged on June 13th by the Metropolitan Police Department, two of whom have been arrested and will be facing initial court hearings on September 7th.  The rest of the defendants are still at large.  The three new individuals indicted today were all part of President Erdogan’s security detail.

ANCA Executive Director Aram Hamparian was videotaping live at the scene of the May 16thattack, which took place in front of the Turkish Ambassador’s residence where President Erdogan was scheduled to have a closed-door meeting with think tank leaders. Hamparian’s video showed pro-Erdogan forces crossing a police line and beating peaceful protesters – elderly men and several women – who were on the ground bleeding during most of the attack.

Hamparian testified before a May 25th Foreign Affairs Subcommittee hearing on this matter. Joining him at the hearing were Ms. Lusik Usoyan, Founder and President of the Ezidi Relief Fund; Mr. Murat Yusa, a local businessman and protest organizer; and Ms. Ruth Wedgwood, Edward B. Burling Professor of International Law and Diplomacy, at Johns Hopkins University School of Advanced International Studies. Usoyan and Yusa were victims of the brutal assault on May 16th by President Erdogan’s bodyguards.

On July 19th, senior members of the U.S. House Foreign Affairs Committee Dana Rohrabacher (R-CA) and Ted Poe (R-TX), Tom Lantos Human Rights Commission Co-Chairman Jim McGovern (D-MA), and Representatives Jim Costa (D-CA) and John Sarbanes (D-MD) condemned Turkish President Erdogan’s violent actions – both in Turkey and the U.S. – during “A Stand for Free Speech” held at the site of the May 16th attacks.  The press conference and rally was organized by the ANCA, in coordination with the Sheridan Circle May 16 Initiative (including many victims of the beatings), and a host of Kurdish, Armenian, Greek, Assyrian, and Christian groups including the American Kurdish Association (AKA), In Defense of Christians, American Hellenic Council, Armenian Legal Center for Justice and Human Rights, A Demand for Action, Hellenic American Leadership Council, AHEPA, and the Armenian Youth Federation.

The May 16th protest in front of the Turkish Ambassador’s residence was a continuation of a demonstration held earlier in the day in front of the White House, co-hosted by the ANCA. As President Trump met with President Erdogan. human rights and religious rights groups were joined by representatives of the Kurdish, Yezidi and Armenian communities to call attention to the Erdogan regime’s escalating repression against free press, the Kurdish and other ethnic communities, as well as Turkey’s ongoing obstruction of justice for the Armenian Genocide.