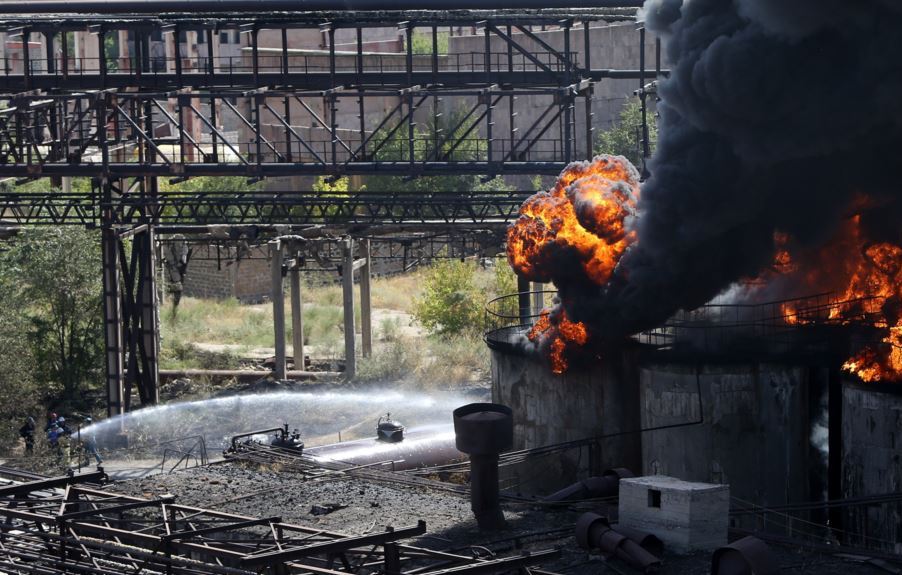 YEREVAN—A massive fire that erupted in a Soviet-era chemical plant in the Armenian capital on Aug. 28 is now contained, sources report. The fire engulfed storage tanks filled with combustible chemical waste, according to several local sources.

Clouds of black smoke billowed into the sky throughout much of the day as over 100 firefighters worked to contain the fire. The Nairit chemical plant, which is located on Yerevan’s southern outskirts, has been largely  idle for the past several years.

In the evening of Aug. 28, Armenia’s Ministry of Emergency Situations announced that the blaze was under the full control of the firefighters and  the fire would not spread to other parts of the plant.

The chief of the Ministry’s Rescue Service, Mushegh Ghazarian, told reporters that no one was hurt and that crews were cooling the site to prevent the fire from spreading.

The Armenian Ministry of Health urged local residents to avoid staying outdoors for long. A special call was made for residents with children and those suffering from respiratory problems to stay indoors.

According to some sources, the burning chemical waste is a type of varnish generated as a result of the production of synthetic rubber. A similar fire had broken out at the plant eight years ago.

“We used to burn and even sell this substance in small quantities when the plant was operational,” Nairit’s former executive director, Karen Israelian, told RFE/RL’s Armenian service. “It doesn’t damage the plant, but you can’t dispose of it.”

Nairit has had only 250 or so employees since 1,700 of its remaining workers were laid off in Jan. 2016. In November, a Yerevan court declared the company bankrupt because of its failure to pay electricity bills totaling $2.6 million.