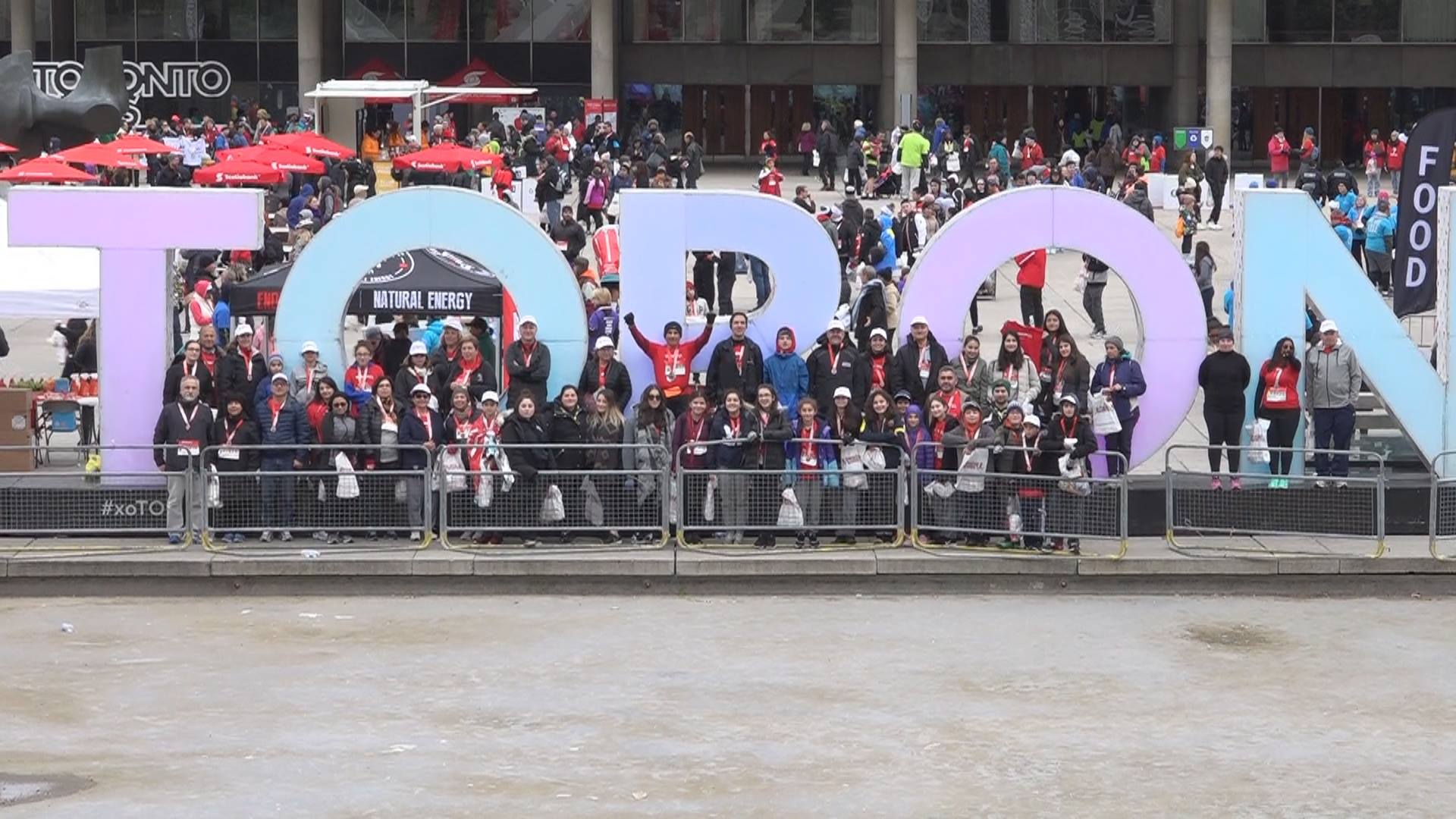 The Scotiabank Toronto Waterfront Marathon is one of the largest marathons in Canada with a total of 30,000 participants running 5K, Half-Marathon (21K) and Full Marathon (42K). Runners from 65 different countries participated. This year once again “A Run To Remember” runners recorded some excellent times and personal bests.

The day started early. At 5:30 am all the participants started to arrive at the Armenian Youth Centre. They proudly wore a bib on the back of their T-shirts displaying the names of their loved ones and honourees. The weather this year was the coldest yet for “A Run To Remember” with the temperature reading 0 degrees and the wind chill at minus 7.  This was a very big contrast to last year’s race which was a very warm 21 degrees.  However, the weather did not dampen the spirits of the participants and everyone was looking forward to a very exciting event. The buses took our 5K participants to the start line at Exhibition Place and our Half and Full Marathoners headed to the start line at City Hall.

The race course had thousands of fans cheering on the runners who all crossed the finish line at City Hall and had the opportunity to experience all that an international marathon has to offer. After the medals, food and pictures everyone came back to the Armenian youth Centre to what else more food and an opportunity to discuss their experiences and accomplishments.

All of our “A Run To Remember” athletes recorded very impressive results at this year’s race.  That is an amazing accomplishment for our athletes. (The results are on the Waterfront Marathon website at http://www.torontowaterfrontmarathon.com

ARTR-2018 had several exciting stories this year and they happened to be in each of the 3 distance races (Full marathon, Half Marathon and 5K).  Here are the results for our ARTR-2018 team. The full marathon takes much dedication and months of training to be able to complete the 42K course. This year it was youth over experience as a first time marathoner Albert Ajemian was our top marathoner with a very impressive time of 4:13:30. Albert has become a role model for “A Run To Remember” as within 4 years, he has steadily progressed from the 5K to the half-marathon and this year he ran his very first full marathon. During his 4 years of training he managed to lose 75 pounds and has become much healthier in the process. Albert was followed closely by our veteran marathoner Raffy Demirdjian. Our top female full marathoner was Andrea Paterson who also moved up to the full marathon this year.

Our Half Marathon runners also produced some exciting results. Once again it was youth over experience. In the men’s division we had 3 runners break the 2-hour mark. Our top men’s Half-Marathoner was Stephan Joly who ran at a blistering pace and finished with and incredible (1:41).  Stephen was Stephan Shatara. Our top female half-marathoner was Lucine Dayian who was also running her first time the half-marathon. Lucine was running in memory of her uncle Ara Bablanian. Lucine had a huge support group of family and friends who had travelled all the way from the U.S. to cheer her on.  She was followed closely by another first-time half-marathoner Jude Cockburn.

We have many incredible stories in the 5K race where Sonia Gashgarian led all ARTR runners with an amazing time of 22:42 and Haig Artounian was the top male ARTR runner with a time of 23:32. The big story was veteran John Artinian who placed 2nd among all 5K runners in the 70-74 age group at the Scotiabank Toronto Waterfront Marathon.

The 5K field was much larger with many more runners. The brother and sister team of John and Sevan Marcarian from the ARS school once again managed to place in the top 5 for the ARTR team. John and Sevan were both running in memory of their uncle Vart Zakarian. The following are our top 5 male and female 5K finishers: