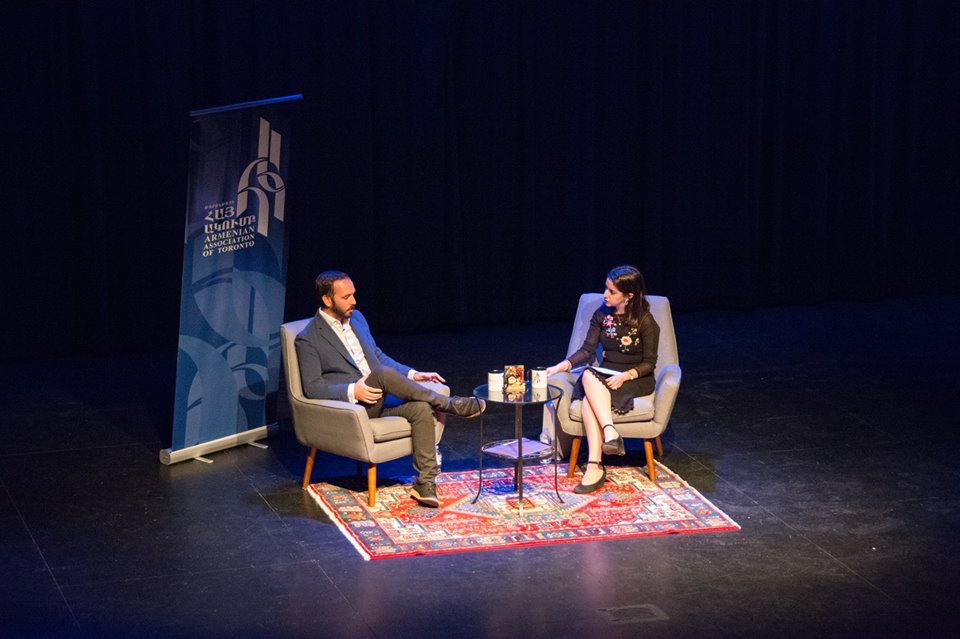 Evan Hadfield during a Q & A event at Fairview Library Theatre, Toronto, March 15.

Toronto-based filmmaker Evan Hadfield learned about the war-torn region of Artsakh shortly after arriving in Armenia in June 2018 to film the next episode for his YouTube series Rare Earth. His resulting video, “The Country The World Says Doesn’t Exist”, has earned Hadfield supporters and haters in equal measure and was the topic of discussion at a Q&A event organized by the Armenian Association of Toronto’s (AAT) recently established youth division.

The event, which was held at the Fairview Library Theatre on March 15, brought out about 200 attendees who engaged in a lively question and answer period following the main interview.

Hadfield, who is the son of Canadian astronaut Chris Hadfield, first entered the spotlight when he ran his father’s social media campaign while he was in space. That experience also piqued his interest to share human stories more directly than the mainstream media.

Hadfield’s video on Artsakh currently has more than 1.2 million views on YouTube since being posted in July 2018. He has been banned from entering Azerbaijan and has received death threats from Turkey specifically concerning mention of the Armenian Genocide.

“It’s almost like there’s a river of hate that you’ve never stepped foot in because you’ve had no reason to be there and I dove into this one,” Hadfield explained.

When asked if being persona non grata ever worried him, Hadfield said, “No, it’s like a badge of honour,” to which sounds of cheers and applause immediately filled the room.

“If somebody says, ‘You went somewhere and you told the history; you can’t come here anymore.’ What are they really saying? It’s got nothing to do with me, it’s all about themselves,” Hadfield continued.

Hadfield, who had just returned from spending two months in Ethiopia and Somalia said people are confronting the same issues in every corner of the world; they have just adapted to their individual environments. His wife Kata, who was seated in the audience, often travels with him to help produce episodes. They have called Toronto home for the last six years and have lived in various countries to date in order to experience daily life in different parts of the world. Attendees of the event posing questions to Hadfield