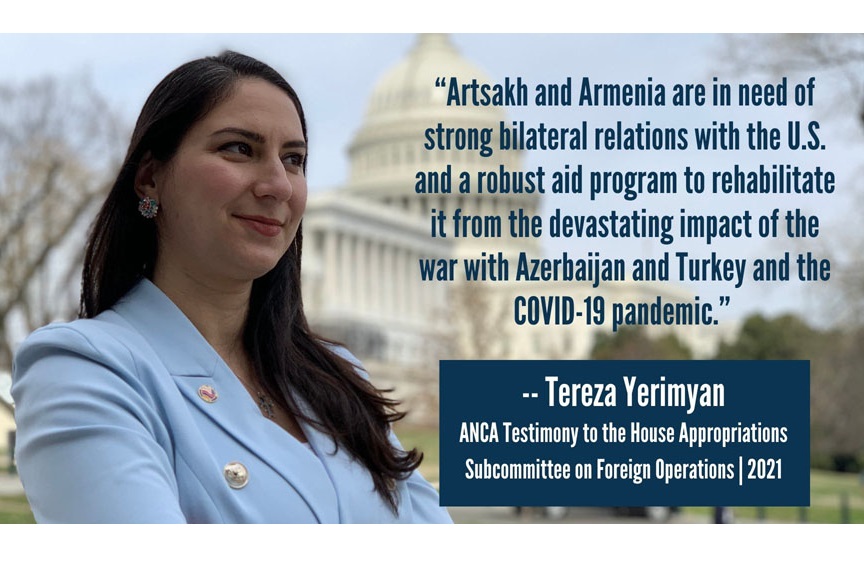 ANCA Government Affairs director Tereza Yerimyan shared with appropriators the increased need for aid to Artsakh and provided thorough background information regarding the recent attacks. “Artsakh and Armenia are in need of strong bilateral relations with the US and a robust aid program to rehabilitate and recover from the devastating impact of the attack by Azerbaijan and Turkey and the COVID-19 pandemic,” she stated in the testimony. Of the $350 million total assistance requested, $250 million should be directed to Artsakh, and $100 million to Armenia.

Yerimyan went on to encourage Congress to uphold the restrictions on the Azerbaijani government put in place by Section 907 of the FREEDOM Act and to stop all aid that would add to the offensive capabilities of the government of Azerbaijan. The ANCA is also requesting that Congress instruct international financial institutions to “vote against any extension by the respective institution of any loan or grant to the Government of Azerbaijan, except to meet basic human needs or to promote democracy.”

Yerimyan closed her testimony to the House’s Appropriations Subcommittee on State-Foreign Operations emphasizing “the necessity for the US to assist in Armenia and Artsakh’s economic and humanitarian efforts and to immediately stop all military assistance to Azerbaijan.”

Similar testimony will be submitted for Senate consideration in the upcoming weeks.

Now, more than ever, Artsakh and Armenia are in need of strong bilateral relations with the U.S. and a robust aid program to rehabilitate it from the devastating impact of the war with Azerbaijan and Turkey and the COVID-19 pandemic. On September 27th, Azerbaijan – led by corrupt dictator Ilham Aliyev – launched a brutal aerial and ground attack on the Republic of Artsakh, targeting civilian population center, churches, hospitals, and schools, resulting in thousands of deaths and forcing Artsakh’s women and children to seek safe-haven in neighboring Armenia.  The 44-day onslaught continued with the military support of Turkey, which paid radical jihadist mercenaries from Syria and Libya to fight against Armenians, while supplying Azerbaijan with military equipment, including U.S. F-16 fighter jets to provide air cover for their bombing raids and white phosphorus that permanently destroyed Artsakh’s verdant forests.

The illegal use of cluster munitions and white phosphorus is well documented by international observes as well as our own Department of State. Turkish Bayraktar drones – which include U.S. parts and technology – were deployed by Azerbajan in countless attacks against churches, hospitals, schools, and other civilian infrastructures to destabilize and depopulate Artsakh.

The joint Azerbaijan and Turkish forces took advantage of the COVID-19 Pandemic and U.S. Presidential elections in their timing of the attacks. Now it is time for Congress to engage in efforts to rehabilitate and prevent another outbreak of war. Thus, our specific requests related to the FY22 State, Foreign Operations, and Related Programs bill are for the following three provisions:

Of the funds appropriated under title III of this Act and prior Acts making appropriations for the Department of State, foreign operations, and related programs not less than $250,000,000 shall be made available for global health, humanitarian, and stabilization assistance for Artsakh:

While the exact percentage of territory requiring clearance remains uncertain, the HALO has reported that the recent attack on Artsakh has resulted in enormous levels of contamination by cluster munitions, rockets, and other explosive ordnance. These hazards are still present near homes, and litter farms and streets – presenting a grave humanitarian risk. Further, the removal of explosives is critical to continuing to rebuild infrastructure decimated during the conflict.

In the wake of last fall’s attack on Artsakh, we also encourage the panel to support funding for refugee relief and rehabilitation efforts. The war caused over 100,000 refugees to flee from Artsakh to neighboring Armenia. Approximately 55,000 families have returned to Artsakh but many have nowhere to return to because their homes were either bombed or has been taken by Azerbaijani forces. The war has also left over 1,000 children either orphaned or in a single parent household. Lastly, the war has injured thousands of soldiers, many required amputations and now are in need or prosthetic limbs and long-term rehabilitation.

Of the funds appropriated by this Act, not less than $100,000,000 shall be made available for assistance for Armenia.

Armenia – a Christian nation deeply rooted in Western democratic values – has, despite the crushing economic impact of Turkish and Azerbaijani blockades, stepped forward as an ally and partner for the United States on a broad array of complex regional challenges.  The Armenian military has been among the highest per capita providers of peacekeepers to U.S.-led deployments, including those in Afghanistan, Iraq, Lebanon, Kosovo, and Mali.

We commend the Subcommittee’s commitment to American Schools and Hospitals Abroad, and encourage continued support through this program for the American University of Armenia and the Armenian American Wellness Center.  We also ask the panel to prioritize supporting Armenia’s role as a regional safe haven for at-risk refugees.

AND
EUROPE AND EURASIA SEC. 7046. (a) Azerbaijan
1) INSTRUCTION.—The Secretary of the Treasury shall instruct the United States executive director of each international financial institution to vote against any extension by the respective institution of any loan or grant to the Government of Azerbaijan, except to meet basic human needs or to promote democracy, unless the Secretary of State certifies and reports to the Committees on Appropriations that Armenian Prisoners of War have been returned home safely and that war crimes, including but not limited to beheadings of Armenian civilians and soldiers have been fully investigated by an independent third party.

We remain troubled that the Administration’s waiver of Section 907 of the Freedom Support Act and the $100 million security package to Baku that adds equipment, tactical abilities, and offensive capabilities to the Azerbaijani arsenal, while freeing up its own state resources for renewed cross-border action against Artsakh and Armenia. The Administration should cease sending military aid to Baku.

As the Subcommittee considers issues related to Azerbaijan, we draw your attention to how its government has, in the last year, failed key Congressional tests of its commitment to peace:

1) Azerbaijan launched military war games in late May of 2020 with the assistance of Turkey, violating the OSCE peace agreements.
2) Following these military exercises, Azerbaijan launched a 3-day attack on the northern border of Armenia, targeting civilian infrastructures, including a PPE facility.
3) In September 27, 2021 Azerbaijan, aided by Turkey launched a surprise offensive attack against Artsakh.
4) On June 3, 2021, Azerbaijan, directly violating the peace agreement signed between Armenia and Azerbaijan on November 7th invaded Armenia in the southern border area of Syunik and continues to take soldiers in that region prisoner, shoot at civilians, and cause injury and death.
5) Over 7 months after the fighting has ceased, Azerbaijan continues to illegally hold over 250 known Armenian civilians and servicemen as prisoners of war, torturing them and killing many of those who are held captive.

In closing, we would like to emphasize, once again, the necessity for the U.S. to assist in Armenia and Artsakh’s economic and humanitarian efforts and to immediately stop all military assistance to Azerbaijan.

The ANCA, as always, thanks you for your leadership and looks forward to working with the Subcommittee to strengthen the U.S.-Armenia alliance, promote regional stability, and advance American interests and our shared democratic values․