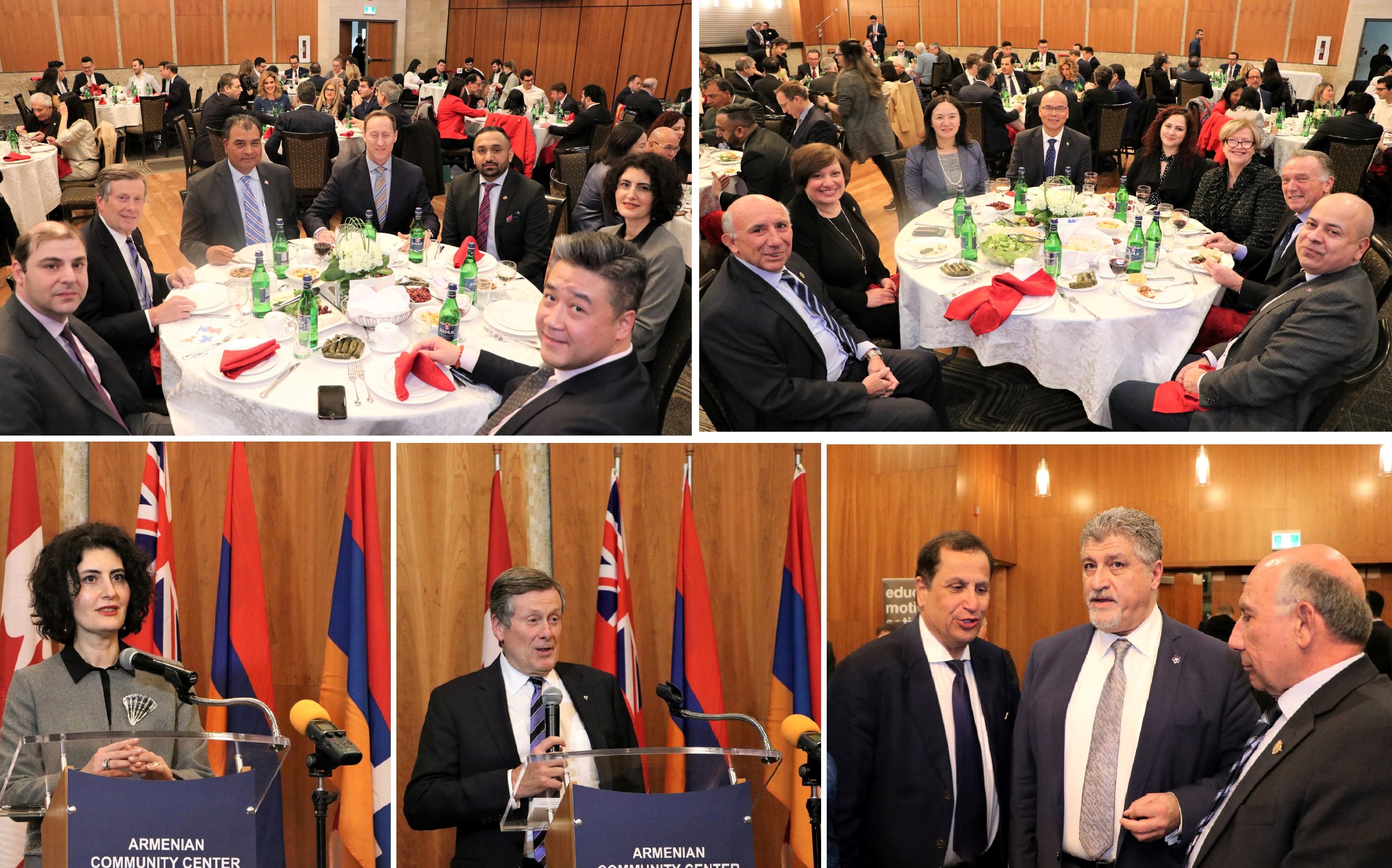 On January 9, the Armenian National Committee of Toronto (ANCT) hosted a wide gamut of Canadian politicians and figureheads, hailing from all facets and functions of government. The event, marking the joyous celebration of the Armenian Christmas, expunged partisan party lines and united disparate political factions under a common theme: a long and enduring friendship with the Armenian Community.

Held within the warm and affable confines of Toronto’s Armenian Community Center, the event was attended by the city mayor, John Tory. Additionally, in attendance were Members of Parliament and Members of Provincial Parliament, Toronto School Board Trustees, and City Councilors. The event was also attended by diplomats including Consul Generals from Greece and Israel as well as Armenia’s Ambassador to Canada, Anahit Harutyunyan. Though amongst the guests the volume of political credentials sufficed to staff a G20 summit, the formalities were checked in, along with the coats, at the front door.

Inside the banquet hall, the atmosphere exuded the aesthetic of an Armenian dinner table. It was loud and friendly and adorned with a plethora of food and wine. There was something delicious within reach from every angle. The guests were sat at separate tables where, before the keynote speeches, they were able to mingle with ANCT members and discuss important issues such as Artsakh and genocide education.

The opening speech commenced the evening with a moment of silence for the 57 Canadians who’d perished just days prior, in Iran, as their plane was shot down. It was from this grim and elegiac backdrop that the Armenian Christmas event celebrating friendships and comradery offered solace.

Shahen Mirakian, Co-president of the Armenian National Committee of Canada (ANCC) spoke at length, among other issues, about Artsakh, and Canada’s salient role in condemning attacks and human rights violations against its sovereignty.

Later in the evening, ANCT President, Harout Matossian spoke, highlighting the necessity and importance of education as a tool to combat bigotry. He made the case that racism should be given no time to ferment; it should be rooted out at an early stage through proper education. Matossian put forth an initiative to make education on the Armenian Genocide, the Holocaust, and every other such act against humanity a mandatory component of our public-school curriculum.

This would be a common, overarching theme for the night. It was later brought up and affirmed across the aisle in speeches by Conservative MP Bob Saroya and Liberal MP Michael Levitt and Israeli Consul General Galit Baram, who also brought up the recent spate of anti-Semitic attacks that rocked neighbourhoods across New York.

As the evening drew to a close, the guests began to disperse; taking home with them a parting gift: red wine, brought from Armenia, made from grapes grown in Artsakh. Both a reminder of their abiding friendship with the Armenian Community and of the ongoing struggle to wrest recognition for the independence of Artsakh.