Armenia is a Gateway to the EAEU 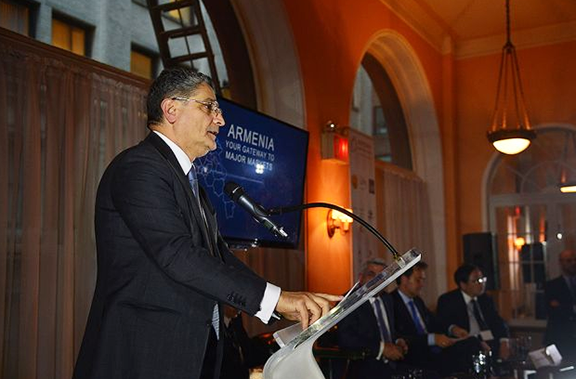 “Investing in Armenia, as a EAEU member state, you enter a huge area where four key freedoms are applied: free movement of products, services, capital and labor” Sargsyan said. According to Sargsyan, despite the fact that a lot of works have been done in the EAEU member states for ensuring those four freedoms, there is still much to do to apply them in the Union in a final form.

But at the same time, Sargsyan stated that the five EAEU member states are confident in their aspiration to make the EAEU a modern economic union.

Sargsyan noted that the EAEU is a young integration union, where the norms and laws are still in the phase of active elaboration and application in the member states.

He also emphasized on the fact that the EAEU is an economic and not a political union, open for cooperation with any state.

“We advocate better cooperation, we do not close, but open markets, since the main issue facing us is to improve the living conditions of the people of our countries,” Sargsyan stated.

Vice Prime Minister and Minister of International Economic Integration and Reforms of Armenia, Vache Gabrielyan, presented business opportunities and advantages of Armenia to possible investors during “Armenia investment forum 2016.” According to the press service of Armenia Development Fund, Gabrielyan mentioned Armenia is distinguished by the degree of liberalization of business environment and by World Bank’s “Doing Business 2016” report, the country ranks 35th, while it ranks 5th by the index of starting a business. Gabrielyan also stated that the Government makes regular efforts to improve those indexes.

Referring to the question “Why Armenia?” Gabrielyan pointed out a number of reasons for investing and doing business in Armenia. “Microeconomic and financial stability, opportunities to enter large markets without custom duties and with a simplified regime, constantly improving business environment, diversified investment directions, young, educated and inexpensive labor force are good grounds to start business in Armenia just from tomorrow,” he said. The benefits and opportunities are rising from Armenia’s accession to the Eurasian Economic Union (EAEU), GSP + trade regime with the USA and the EU, and cooperation with Georgia and Iran werespecially highlighted.

Gabrielyan also presented the legislature protecting the rights of foreign investors in Armenia. He noted that tax and customs reforms are aimed at improving business environment in Armenia.

Deputy Director-General for Neighbourhood and Enlargement Negotiations (DG NEAR) Katarina Mathernova, speaking about the agreement being currently negotiated between Armenia and the EU, said, “This agreement will be beneficial for trade as in certain aspects it will lead to economic convergence settings. Key spheres will be included in this agreement. This also means an entry to world’s biggest common market. Armenia is an important partner for the EU.” She concluded saying that the agreement will be fully in compliance with Armenia’smembership to the EAEU.