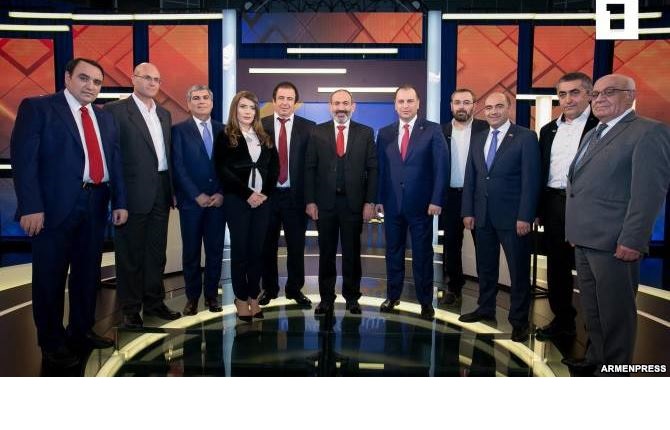 Armenia – The leaders of 11 parties and blocs running in parlamentary elections pose for a photograph before a live debate hosted by Armenian Public Television, December 5, 2018.

The ten men and one woman discussed political, economic and security challenges facing the country for three and a half hours.

The live debate, the first of its kind in Armenia, was hosted by the Armenian Public Television three days before the elections which Pashinian’s My Step alliance is widely expected to win.

Pashinian and Sargsian repeatedly clashed during the lively discussion, trading recriminations and interrupting each other. The mutual accusations escalated into a shouting match at one point.

Nevertheless, the two men shook hands at the end of the debate as did the other participants, including Prosperous Armenia Party (BHK) leader Gagik Tsarukian, Dashnaktsutyun’s Armen Rustamian and two former Pashinian allies.

Pashinian again portrayed the upcoming vote as a final chapter of this spring’s “velvet revolution” that toppled Republican Party (HHK) Chairman Serzh Sarkisian’s government and brought him to power. “No vote will be stolen,” he said. “No vote bribes will be handed out.”

In his opening remarks, the 43-year-old prime minister called his socioeconomic policies a success, saying that his government has cut some taxes, raised poverty benefits, and lowered mortgage rates for young families. He also claimed to have eliminated “systemic corruption.”

“I’m sure that more corruption cases will be exposed soon,” said Pashinian.

Predictably, Sargsian strongly criticized the new government’s track record and said the HHK is the only party seriously challenging Pashinian and capable of holding him in check. Armenians, he said, can decide on Sunday whether country will become a “one-man dictatorship” or have a “balanced parliament.”

The former defense minister, who is also 43, blamed the government for the fact that economic growth in Armenia has slowed since April. He went on to accuse it of “poisoning” free speech, creating “serious threats” to Nagorno-Karabakh and damaging Armenia’s relations with Russia.

Citing Pashinian’s leaked phone calls with the head of Armenia’s most powerful security agency, Sargsian also claimed that local courts are acting on the premier’s orders.

“If this was really the case, 90 percent of your party would be in jail now,” Pashinian shot back. He again accused the former government of having systematically “plundered” the country.

“There cannot be a corrupt government in Armenia anymore because the people know now that it can be sorted out within a week,” he said, referring to the April-May mass protests.

Sargsian, who also faced verbal attacks from several other participants of the debate, countered that Pashinian is sticking to key policy decisions that were made by the HHK government, including Armenia’s accession to the Russian-led Eurasian Economic Union.

“For 10 years you accused authorities of everything,” said Sargsian. “Now you refute what opposition leader Pashinian said on a daily basis.”

Pashinian was then challenged by Rustamian to elaborate on his position on the Karabakh conflict.

The Dashnaktsutyun leader seemed unconvinced by the premier’s assurances that no peace deal with Azerbaijan can be put into practice without popular approval. He touted his party’s hard line on the unresolved conflict and, in particular, its opposition to major territorial concessions to Baku.

Meanwhile, Tsarukian, who refrained from criticizing the current or former authorities, was unexpectedly attacked by Edmon Marukian, the leader of the Bright Armenia party that was until recently allied to Pashinian.

Marukian questioned the tycoon’s involvement in politics and said that the latter’s Prosperous Armenia Party (BHK) has accomplished little despite finishing second in the last three parliamentary elections.

“What have you, Mr. Marukian, accomplished until now except talking?” Tsarukian asked after defending his entrepreneurial activities and asserting his desire to be “useful to our country.”

“I’m a politician,” replied Marukian. He reaffirmed Bright Armenia’s stated goal of being the second largest party in the new Armenian parliament.