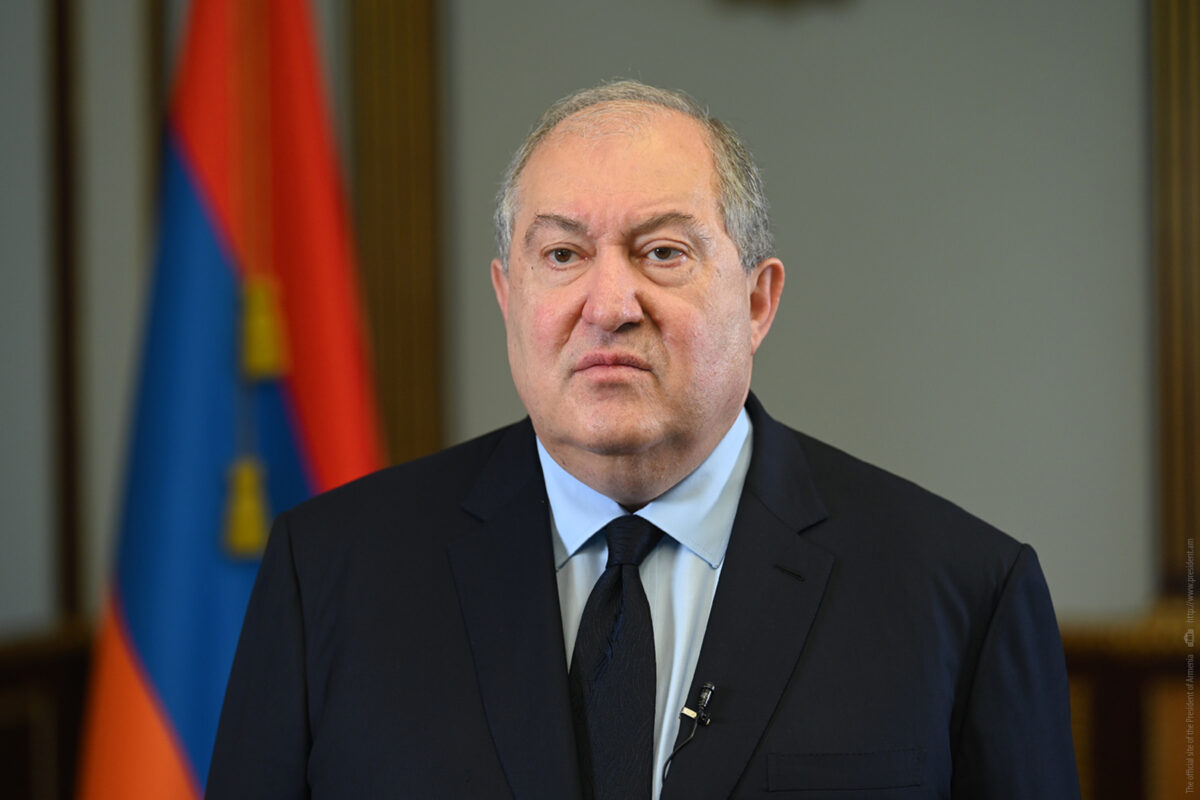 (Armradio)- President Armen Sarkissian has announced his resignation. The President has issued a statement, which reads, in part:

In the early 1990s, with major geopolitical changes, our people were given the greatest opportunity to establish their own independent state. Our mission was not to replace one flag with another but to build a country that would ensure the security, progress, and prosperity of Armenians again centuries later.

I emphasize that the main meaning of the existence of an independent state is the ability to assume and bear responsibility when we realize that only we, as a single body, are the builder of our own victories and guilty of our own defeats.

Encouraged by such a historic opportunity, I, like many of my compatriots, dedicated myself to that mission. For various reasons, my participation at various stages changed, but I did not stop believing in our ultimate national success. And that was my main motivation for agreeing to the proposal to become the President of Armenia.

Making this important decision, I proceeded from the proposal made to me, according to which the new presidential institution will have tools, opportunities to influence foreign policy, economic, investment policy, relations with the Diaspora, as well as to promote national interests in the international arena, new scientific and educational and to create a high-tech environment.

The question may be, why did I not resign at that time? The answer is obvious, because of the responsibility I took on as President of the Republic. I was obliged to do everything in my power to avoid further deepening of the internal division, possible clashes, which could lead to extremely negative consequences. I sought to use the prestige and connections gained through my many years of work to use my international political and economic potential to build a strong, stable state.

Again, the question may arise as to why the President failed to influence the political events that led us to the current national crisis. The reason is obvious again – the lack of appropriate tools, tools with which any state official is endowed with only one document – the Constitution. The roots of some of our potential problems are hidden in the current Basic Law.

We have a paradoxical situation when the President has to be a guarantor of statehood without actually having any real tool. The Constitution also presupposes the supremacy of one institution over another, creates obstacles for well-known Diaspora specialists to participate in the management of state institutions of the historical Homeland, and so on.

We are a parliamentary republic in form, but not in content. The purpose of my proposal was not to move from one form of government to another (parliamentary to semi-presidential or presidential), but to create a state system based on checks and balances. Without it, it is difficult to talk about significant achievements, because progress and success can be achieved only in the conditions of a predictable, harmonious system.
I am glad that a commission for constitutional amendments has been set up, for which I thank the government. I hope that eventually, the constitutional changes will take place, the next president and the presidential institution will be able to work in a more balanced, coordinated environment.

We live in a unique reality, a reality where the President cannot influence matters of war or peace.

In reality, when he cannot veto the laws that he considers inexpedient for the state and the people.

Reality, when the President’s opportunities are perceived not as an advantage for the state, but as a threat by various political groups.

A reality where the President is unable to use most of his potential to solve systemic domestic and foreign policy problems.

A reality where the world is in a constant turbulence zone, but the President does not have a constitutional tool to help his country.

I have been thinking long and have decided to resign from the post of the President of the Republic after working actively for about four years.

That decision is not emotional at all, it follows a certain logic.

The President does not have the necessary tools to influence the radical processes of domestic and foreign policy in these difficult times for the country and the nation.

At this difficult time for our state, when national unity is needed, the presidential institution should not be the target of gossip and conspiracy theories, thus diverting public attention from the most important issues.

Today, more than ever, we need meaningful, well-thought-out, thoughtful, meaningful action. Otherwise, we, the Armenians of the whole world, will not achieve the goal of our mission, we will find ourselves in the margins of history.

We have no right to make mistakes anymore!

In the end, I would like to express special gratitude to our citizens, our compatriots in the Diaspora, for their perseverance, endurance, patience, and courage in these difficult times for the country.

Special thanks to the soldiers and officers of our brave army, my homage to the families of the heroes who sacrificed their lives for our Motherland.

I also thank all the employees of the Office of the President of the Republic, my colleagues in state structures for their effective joint work.