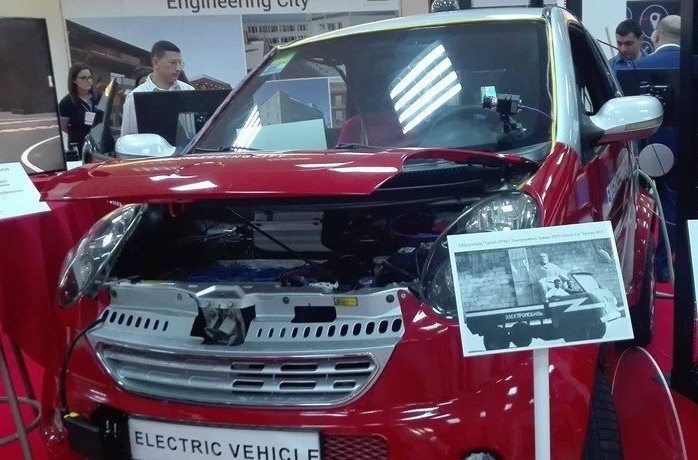 YEREVAN, (A.W.)—An Armenian-made electric car debuted at the 13th annual DigiTec tech expo, which opened in Yerevan earlier today. The electric-powered, self-driving car, which was assembled in Armenia by National Instruments, was unveiled at the “Engineering City” pavilion of the three-day exhibition.

“The whole world is working on [electric cars] and we should do the same in Armenia,” National Instruments’ Ruben Simonyan told Yerevan-based Itel.am. “We need to increase the number of electric cars and the percentage of self-driving or driver assistance systems. We’re exhibiting the electric car we assembled in Armenia. Essentially, it’s a continuation of our engineering culture. This isn’t a novelty. The first electric car was assembled in Armenia back in 1975. Now we should extend that culture,” said Simonyan.

The car is equipped with several driver-assist devices such as radars, acamera, and laser equipment. Though the sensors and equiptment were not produced in Armenia, National Instruments worked on the design and testing of the entire system.

“To make sure that the car will operate smoothly in different situations, you need to drive millions of kilometers. Producers used to do exactly that and some of them still do,” Simonyan explained. “But that requires too much time and expenses, which affects the car’s price. Our testing doesn’t require driving millions of kilometers in specialized areas. We can simulate the same scenario for several times to make sure the system is working fine.”

A team of around 20 engineers and designers worked on designing and testing the car, collaborating with several foreign companies.

DigiTec is the largest technological exhibition of the region and runs Sep. 29-Oct. 1 at the Yerevan Expo Center.