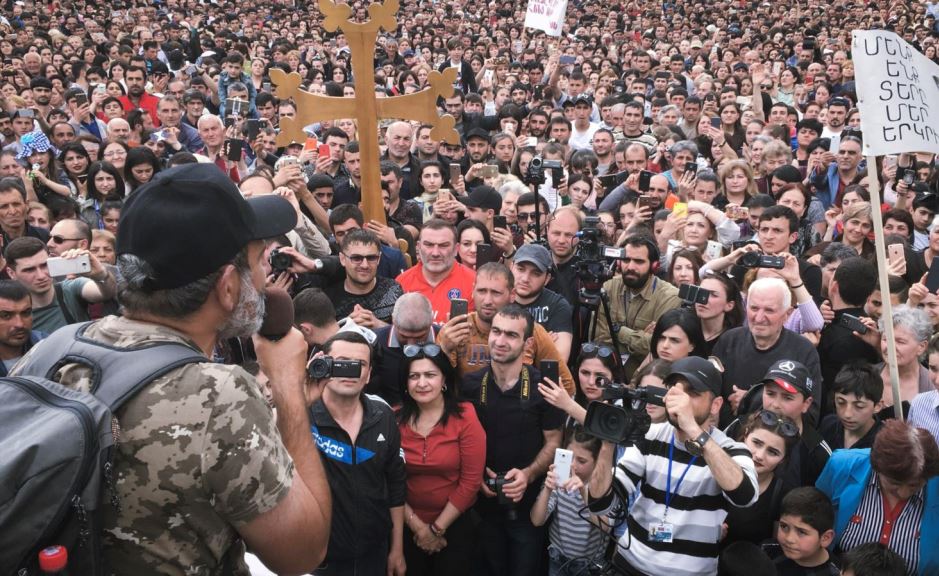 (Azatutyun)- Bowing to pressure from opposition leader Nikol Pashinian, the ruling Republican Party of Armenia (HHK) announced on Saturday that it will not nominate Karen Karapetian or any other candidate for the vacant post of the country’s prime minister.

The Armenian parliament is scheduled to choose the next premier on May 1, one week after Prime Minister Serzh Sarkisian stepped down amid massive street protests organized by Pashinian.

“We will not nominate a candidate,” the HHK spokesman, Eduard Sharmazanov, told a news conference.

“Who will we vote for? That depends on who will be nominated and what programs they will come up with,” he said.

Sharmazanov attributed the decision to “new political realities.” He said the HHK is anxious to avoid continued instability in Armenia which would be fraught with serious threats to its national security.

So far only Pashinian has expressed his intention to run for prime minister. He has urged Armenians to continue to demonstrate in support of his candidacy.

Tsarukian has yet to announce whether he will be seeking the post of prime minister. He was due to make a statement to that effect later on Saturday.

The HHK’s decision was announced as Pashinian addressed thousands of supporters rallying in Vanadzor, Armenia’s third largest city 115 kilometers north of Yerevan. He described the move as “not bad” but said the ruling party must go farther and help to install him as interim prime minister before calling snap general elections. He has repeatedly stated that his premiership would formalize the victory of his anti-government “velvet revolution.”

Pashinian declined to comment further when he was approached by an RFE/RL correspondent while leading an unusually large crowd marching through Vanadzor. He also would not say how he would react Tsarukian’s possible decision to enter the fray.

The 42-year-old former journalist met with cheering crowds on his way to Vanadzor. His motorcade made regular stops in towns and villages en route the city of 86,000 people. He was greeted by thousands of jubilant adults, children, and elderly people a day after a similar tour took him to Gyumri, Armenia’s second largest city.

Earlier in the day, a senior HHK lawmaker, Samvel Farmanian, urged Pashinian to meet with the party’s parliamentary faction and “explain why we should vote for you.” “Come for a simple, human talk,” he wrote on Facebook.

“Let us discuss without pathos important issues regarding defense, your ideas on maximum concessions in [peace] negotiations and understand why the word ‘strategic’ is missing from your rhetoric on our relations with Russia. There is a lot that needs to be clarified.”

In the meantime, Farmanian said, the Pashinian-led movement must stop “terrorizing” HHK lawmakers “under the guise of public lobbying.”

Pashinian appeared to respond to this appeal when he campaigned in his hometown, Ijevan, later in the morning. He said he is prepared meet with not only HHK deputies but also all other members of the National Assembly.

The presidential press service described the meetings as “constructive.” “The president of the republic hopes that with joint efforts it will be possible to find a mutually acceptable solution,” it said.

ARF to Support The People’s Candidate on May 1