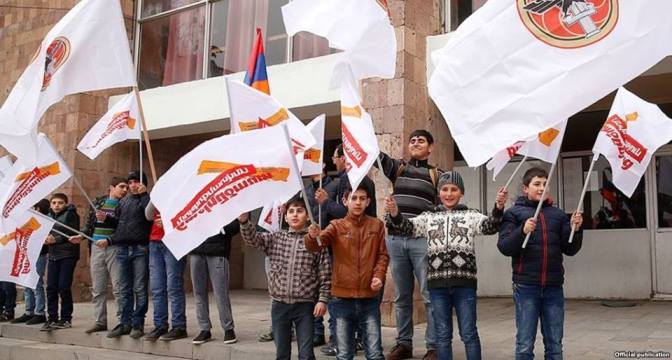 An Armenian civic organization on Friday claimed to have collected evidence that public school principals across Armenia are illegally pressurizing their staffs and students’ parents to vote for the ruling Republican Party (HHK) in the upcoming elections.

The Union of Informed Citizens (UIC) said one of its activists posing as a senior HHK representative has telephoned the directors of 136 schools and kindergartens in and outside Yerevan. It said 114 of them admitted drawing up lists of children’s parents as well as schoolteachers and kindergarten staff who pledged to back the HHK in the April 2 polls.

The UIC said the lists were submitted to local government bodies or HHK campaign offices. It also publicized purported audio of those phone conversations.

“We phoned all administrative districts in Yerevan and all provinces,” the UIC’s Daniel Ioannisian a news conference. “More than 80 percent of school and kindergarten directors admitted that they submitted such lists for the Republican Party and gave details of those lists.”

In Ioannisian’s words, the longest list containing around 1,700 names was drawn up by the head of Gyumri’s secondary school No. 37. “When asked whether those people will vote for the Republicans, the school principal said that they are using all methods, including intimidation, to deal with voters,” said the activist.

Ioannisian, whose organization will be monitoring the parliamentary elections, denounced the alleged illegal campaigning as a “nationwide crime” committed “at the state level.” “These are not isolated cases,” he said. “We didn’t phone all schools. We just phoned 136 randomly chosen directors and 80 percent of them admitted engaging in that practice.”

The HHK denounced the allegations as a “dishonest” provocation aimed at discrediting its supporters. In a written statement, the party’s campaign headquarters did not deny that many school principals are campaigning for its election victory. But it said that “recruitment, registration, mobilization and identification of the potential electorate” is part and parcel of an election campaign.

“The Electoral Code does not forbid Armenia’s citizens from getting involved in campaigning and logical activities beyond their work hours and work duties,” said the statement. “A meticulous analysis of a large part of the recordings gives one no reason to claim that there was a violation of the Electoral Code.”

The party headed by President Serzh Sarkisian has long been accused by its political opponents, civil society members and media of using its government levers to win elections. It has always denied that.

HHK candidates running for parliament, many of them wealthy individuals, are also facing growing allegations of vote buying. They deny handing out cash or other material aid to voters.