Armenian Turks and other Roots Stories 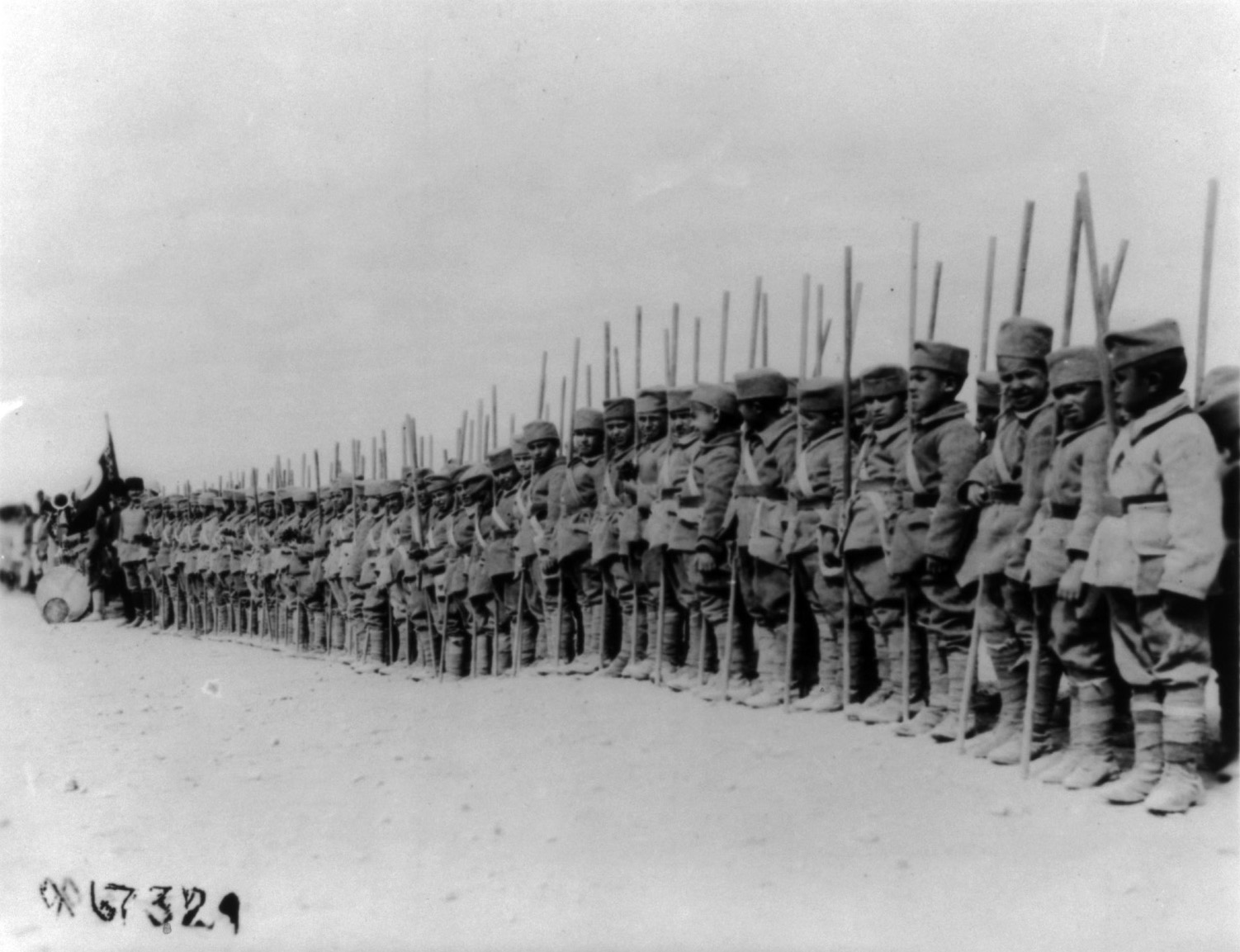 Armenian boys who were orphaned due to the Armenian Genocide were conscripted into the Turkish army by Kazim Karabekir to fight against Armenia during the Turkish-Armenian War of 1920. This photograph was taken during the American Military Mission to Armenia (1919) led by General James G. Harbord (Photo: U.S. Library of Congress/Public Domain)

Recently the Turkish government opened a website where Turkish citizens can look up their ancestral roots until mid-1850s. There are hundreds of stories in printed and social media that this caused disappointment and shock among several Turks who discovered that instead of coming from purely Turkish origins, they had Albanian, Arabic, Pontic Greek, and worst of all, Armenian roots. There are even reports that some members of an ultra nationalistic and racist Turkish party were ostracized, thrown out of the party, went into depression and even committed suicide upon finding Armenian family roots.

Whether these stories are true or not, the subject of one’s roots is deadly and critical in Turkey. The late Hrant Dink was persecuted, prosecuted as ‘insulting Turkishness’ and eventually assassinated after revealing that Ataturk’s adopted daughter and first female military pilot in Turkey, Sabiha Gokcen, was in fact an Armenian girl orphaned during the 1915 genocide.  A former president of Turkey had sued an opposition member of parliament for ‘accusing and insulting’ him by stating that ‘he came from an Armenian family in Kayseri’.  And yet, in a country where calling someone Armenian is the biggest insult, there are numerous documented and undocumented stories about prominent Turks having Armenian roots, including a past president, another former president’s wife, and several opposition politicians. In one of the documented stories,  the family of a past opposition leader who is an ultra nationalistic Turk, is converted to Islam Turk from an Armenian family in the Black sea region, whose Armenian descendents now live in Canada.

When this official genealogy website was opened, I immediately wondered how our hidden Armenians’ roots were recorded. A quick survey revealed that absolutely none of them were recorded as Armenian. Their family history started only with their adopted Moslem Turkish names. Although there is past evidence that the government keeps detailed records of converted Armenians among Turks and Kurds, these records are not made public and are not revealed in this new website. Interestingly, it became evident that many Armenians killed, lost and deported during the 1915 genocide are still shown as ‘ALIVE’ in the website.  Many Armenian families who knew the tragic 1915 fate of their grandmothers or grandfathers, born all the way back in 1850’s, are now finding out that these people are still miraculously alive, according to the doctored records of the website.

I wish to relate two interesting, and little known, stories of roots.

An Armenian wealthy family lives in a village of Malatya in the 1880’s. The region is terrorized and harassed by Kurdish tribesmen who regularly raid the villages. Armenians have started organizing defence forces by banding together ‘fedayis’, to protect the Armenian villages. An Armenian fedayi leader approaches the head of this wealthy Armenian family and asks for money to buy weapons and horses. The wealthy Armenian states he will decide in two days whether to comply with this request or not. At the end of two days, the fedayi returns, the wealthy Armenian refuses to give any money, and the fedayi promptly shoots the man. The widow of the killed Armenian flees with her newborn son to Izmir, where she converts to Islam and raises the boy with complete hatred of Armenians.  The boy grows up to be Ismet Inonu (1884-1973), the second president of Turkey after Kemal Ataturk. He is perhaps the worst enemy of the Armenians and other minorities in Turkey, after the Ittihadist leaders. He brought a legislation called ‘Wealth Tax’ in 1942, ostensibly to help Turkey cope with the war economy, but with the real aim of ruining the minorities. The taxes were assessed based on ethnic origin, 5% from Turks, 156 % from Greeks, 179 % from Greeks and 232 % from Armenians. The payment deadline was 15 days and anyone who couldn’t pay was arrested and sent to the eastern provinces to work as labourers in stone quarries, building roads or tunnels. This was in effect a wealth transfer from the minorities to the Turks. Many Armenians, after selling all their assets at dirt cheap prices, went bankrupt and still couldn’t raise the required amounts and ended up going to the labour camps and died there. In 1964, Inonu took further revenge on Greeks when he deported 45,000 Greeks with dual Greek and Turkish citizenship during the Cyprus crisis. These people were given ten days to leave behind all their properties, assets and belongings to leave the country with the allowed $20 and 20 Kg (45 lbs) of possessions within 10 days. The story of Ismet Inonu’s Armenian roots was corroborated by prominent historian Prof. Pars Tuglaci (Parsegh Tuglaciyan) (1933-2016), a family friend of Inonu.

Ali Kemal is a prominent liberal Ottoman journalist and editor of the Ikdam newspaper in the 1910’s. He is also a member of the opposition Liberal Union (Itilaf) party and severe critic of the ruling Ittihad Terakki party. He fiercely criticizes the ruling party for entering the war, and especially for committing ‘war crimes and massacres’ against its own Armenian citizens. His editorials and brilliant political speeches defending the Armenians are so vehement that the pro-Ittihadist media dub his name as ‘Artin Kemal’ (Artin is an Armenian name, short for Harutyun). After the war, when Ottoman Turkey is defeated and the Ittihadist leaders flee, the Sultan appoints a new government and Artin Kemal even becomes Minister of Interior for a short while. Artin Kemal relentlessly demands prosecution and punishment of the Ittihadist leaders. While he continues his attacks on the Ittihad leaders and defends the Armenians’ rights, he decides to send his British wife and children to England for safety reasons. Unfortunately, the tide turns against Artin Kemal when the resistance started by Kemal Ataturk in Ankara gains power and sweeps the Sultan and the Istanbul government away. Artin Kemal gets caught in the barber shop of Tokatliyan Hotel in Istanbul .  While he is being taken to Ankara for trial, one of Ataturk’s commanders, ‘Red’ Nureddin Pasha (dubbed red for his red beard as  well as his bloody cruelty)  orders his soldiers to lynch Artin Kemal who is torn apart limb by limb while still alive and Artin Kemal dies tragically in 1922. It seems this Nureddin specializes in lynchings because when his forces enter Izmir (Smyrna) in 1922, he does the same to the leading Greek bishop in the city, now named Saint Chrisostomos of Smyrna, only this time he orders the bishop’s eyes gouged before tearing him limb by limb.

Back to Artin Kemal’s British wife and children in England, the family raises several prominent politicians. The latest?  Former mayor of London, and the current Foreign Minister of Britain, Boris Johnson, who happens to be Artin Kemal’s great grandson. As a master diplomat, Boris Johnson tells Turkish President Erdogan that UK will do everything possible to get Turkey into the European Union, but at the same time, he advocates Brexit by arguing that if Turkey enters EU while Britain is part of EU, Britain would be flooded by Turkish immigrants.

If it weren’t for the tragic roots stories, politics would be fun.

An Armenian Island on the Bosphorus

Armen Sarkissian sworn in as 4th President of Armenia