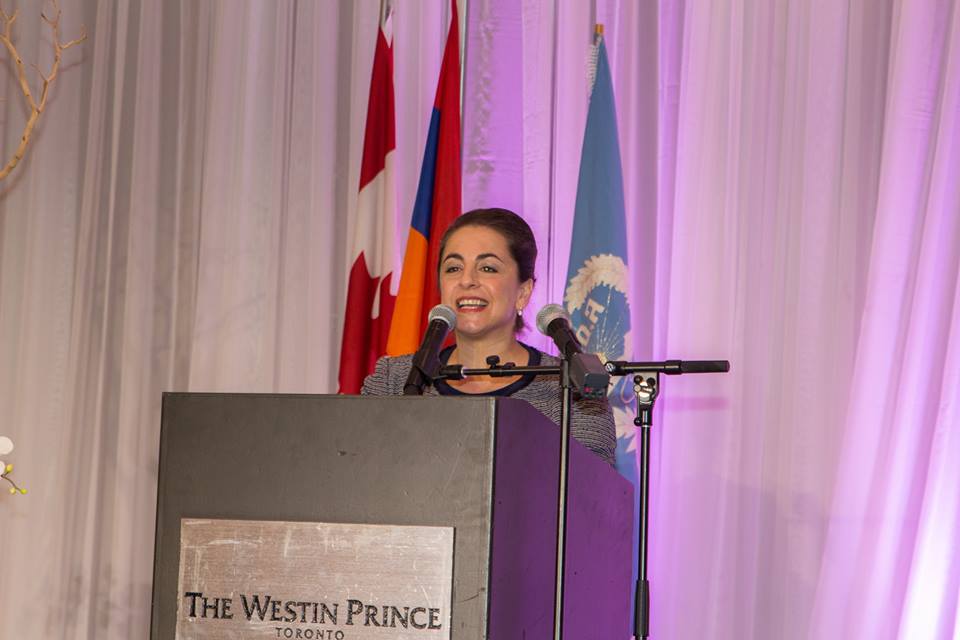 ARS Roubina Chapter celebrated International Women’s Day on March 4, at the Westin Prince Hotel in Toronto with 410 women and men in attendance.

There was a pre-luncheon reception with finger foods and refreshments. While socializing, there was a beautiful photo booth designed by Paper Blossoms by Margo which helped set an atmosphere of loveliness, magnificence, and beauty.

Hosts of the event Ani Titizian and Hoorik Yeghiazarian (who addressed the audience in both Armenian and English) spoke passionately about the importance of celebrating International Women’s Day every year and the many magnificent projects that ARS undertakes around the world. On a day like International Women’s Day, it’s necessary to reflect on the strides women have taken and the barriers that have been broken.

Historically women have been seen as the inferior gender. Women have faced discrimination from every level and have had to fight for their rights for decades. It used to be assumed that women were unable to handle pressures of life outside of their home. There was a time that women could not vote, could not work, and were excluded from politics and sports. Women’s role was confined to raising children and keeping the household and family together.

Cambridge University only fully validated degrees for women in 1947 and in 1963, only 55 years ago, the Equal Pay Act was passed. The following year, the Civil Rights Act granted equal rights to women in all areas of employment.

Over the years, women fought to be seen as more than just wives and mothers and wanted recognition of being whatever they dreamed of.

The keynote speaker of the event was Dr. Maral Ouzounian, the only Armenian cardiac surgeon in Canada. During her speech, she reminded us all that anything is possible — we can have it all: a career and a family.

Dr. Ouzounian is married to Michael Torbay and has two sons: Oliver and Wesley.  Her family moved to Toronto from Lebanon when Dr. Ouzounian was just a little girl. Lena Ouzounian, her mother, who introduced her to the audience, described her firstborn as a happy child and said she preferred to run growing up. “She would fall, but always got up,” Mrs. Ouzounian recalled. “She persistently got up and kept going. She was fierce and optimistic. This would be how she lived her life as she got older.”

Her father, Dr. Zareh Ouzounian, introduced Dr. Maral and her two sisters to sports without setting limits due to the fact that they were girls. Her parents encouraged their daughters to do anything they wanted.

Not only did she share her personal story, but she educated the sold-out crowd of women and men about the number one killer of women: heart disease.

She informed the audience that women are least likely to get checked, and their blood pressure is likely to rise as they get older. She said that if women ate right, didn’t smoke and stayed active, they would reduce their risk of cardiovascular disease by 82%.

Although Dr. Ouzounian is now in the science field, she always loved reading and would read during class. Music also played a big role in her life and was successful as she won piano playing competitions at the provincial and national levels. Music taught her a lot when it came time for medical school, like memorization, practice, discipline, and appreciation for the arts.

In May 2017, the Toronto Star published an article on Dr. Ouzounian — she was working, while pregnant with her second child, on Mother’s Day.

She credits her success to her hard work and dedication, but she knows that her cornerstone is her family. “Without them, she said, I wouldn’t have accomplished anything.” She referred to her family as a village, and they are the only reason her unconventional lifestyle works.

Dr. Ouzounian is a great role model for women to go after what they want. Being a woman never stopped her, and now, she is saving lives as a cardiovascular heart surgeon.  She is proof that anything is possible.

Events like these put together by ARS Toronto Roubina Chapter help inspire women and men of all ages to find what they’re passionate about and go after their dreams.

For a young woman like me, it’s important to see someone such as Dr. Ouzounian succeeding in a field where we typically don’t see many women.

Dr. Ouzounian received standing ovation at the end of her speech.  She was presented by a bouquet of flowers and a small gift by Iren Telemian, the Chair of ARS Roubina Chapter and by Isabelle Davidian, the Chair of the International Women’s Day Event Committee.

Lunch followed the keynote speech during which classical guitarist Haig Ashod Beylerian, entertained the audience with his music. After the luncheon, Hoori Chitilian and Seven Titizian hosted a fashion show which featured clothes by NVU Boutique and Rebellious Rose Boutique.  The three segments showcased clothes for daytime, business and evening wear and were modeled by 10 volunteers of all ages and sizes. A portion of the net proceeds of this event will support hEr VOLUTION, which provides assistance, counselling and support to young women seeking employment in STEM-related fields (Science, Technology, Engineering and Math) and to ARS “Mother and Child” Health and Birthing Center in Akhourian, Armenia to which ARS has been providing financial support for years and which registers more than 1,200 births annually.