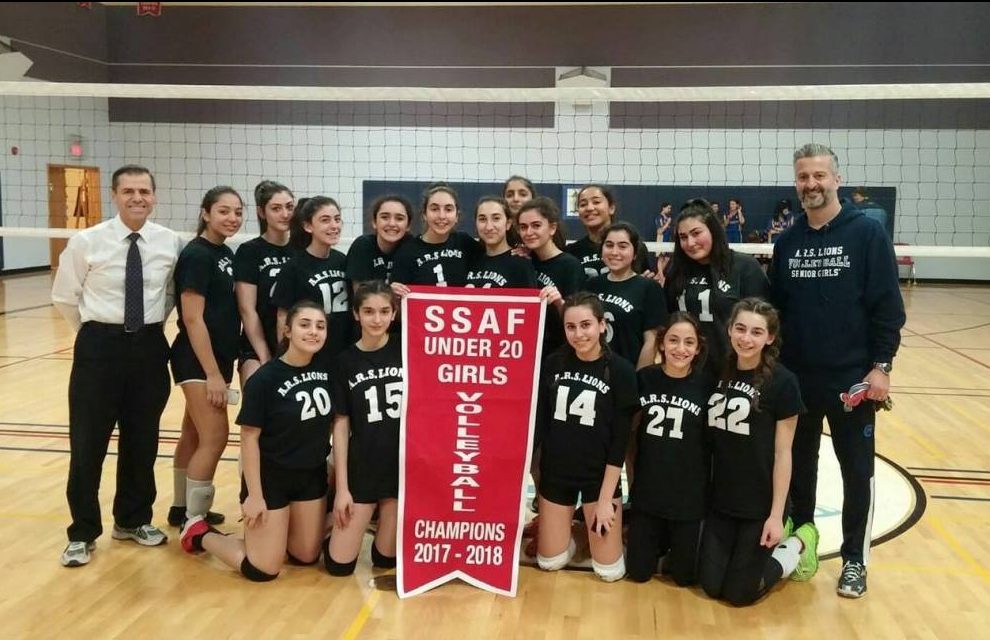 The ARS school is a member of SSAF (Small Schools Athletic Federation), an organized league of many sports that run throughout the year.

Five years ago athletic director Alex Movel set out to develop an athletic program that would add athletic achievement to academic excellence of the ARS school. He recruited volunteer coaches Sam Manougian and Jack Hagop Kakousian and started a training program for the girls’ volleyball team at the elementary and high school levels. For the first few years the teams struggled as they faced more experienced teams. However, the players never gave up and continued to work hard and started to develop their skills and teamwork. Every year their results slowly improved and finally won their first championship 2 years ago. Last year the team advanced all the way to the semi-finals before losing by a very close margin.

This year the ARS team once again finished the regular league season in 1st place in their division with a perfect 6-0 win-loss record. They were headed to the final championship tournament as the number 1 seed.

The top 4 teams in each division came together for an all-day tournament. The tournament draw was made up of 2 pools of 4 teams each. Each team would play a round-robin match with each of the other 3 teams in their pool. The ARS team which finished in 1st place in the North Division was in the same pool with Toronto Prep and UOG who finished 2nd and 3rd in the South Division as well as Toronto Waldorf which finished 4th in the North Division. The ARS team completed their 3 round-robin games in 1st place in their pool with a perfect undefeated record. In the semi-final game ARS faced a very tough team from Newtongrove who also happened to be last year’s champions. ARS completely dominated the opposition and easily advanced to the championship final.

After a long day and many matches it came down to 2 teams and the final match of the day to decide the championship. In the final championship game ARS was matched against the team from Hudson College. Hudson College was from the South division and also had an undefeated record in the regular season. In the first game ARS completely dominated. The second game was much closer and as the whistle blew to end the game the ARS team erupted in celebration. They had captured their second volleyball championship banner in the last 3 years. They all cheered as they raised the championship banner with pride which was a culmination of all their hard work and dedication throughout the season.

After 5 years of development it is official. The ARS school senior girls’ volleyball team and their development program is now known as a volleyball powerhouse. With a strong nucleus of players led by their leader and captain Liza Babaoglu and a large group of juniors coming up through the ranks, the ARS girls volleyball team will continue to grow and dominate for the next several years.

The team will only lose one senior member Celia Barsamian who is in grade 12 and will be graduating this year. When asked about her experience playing volleyball at ARS, she replied: “I was proud to be part of 2 championship teams and helped to bring 2 volleyball championship banners to ARS, especially in my graduating year.” With a large number of grade 8’s moving up to the senior ranks next year, there will be a bigger pool of talent and the competition will be much tougher. Coach Jack Hagop Kakousian said: “Our players matured throughout the season and when they set aside their individual needs and focused on the needs of the team, magic started to happen. It is all about attitude.”

Captain Liza Babaoglu provided the leadership the team needed on and off the court. Her experience was invaluable and she always provided the team with that extra lift when they needed it. During the championship tournament she said “All the players supported each other. It was a team victory. We were focused on our goal but also had lots of fun playing volleyball this year. Thank you to all our coaches”.

William Saroyan’s bike to be showcased in Yerevan