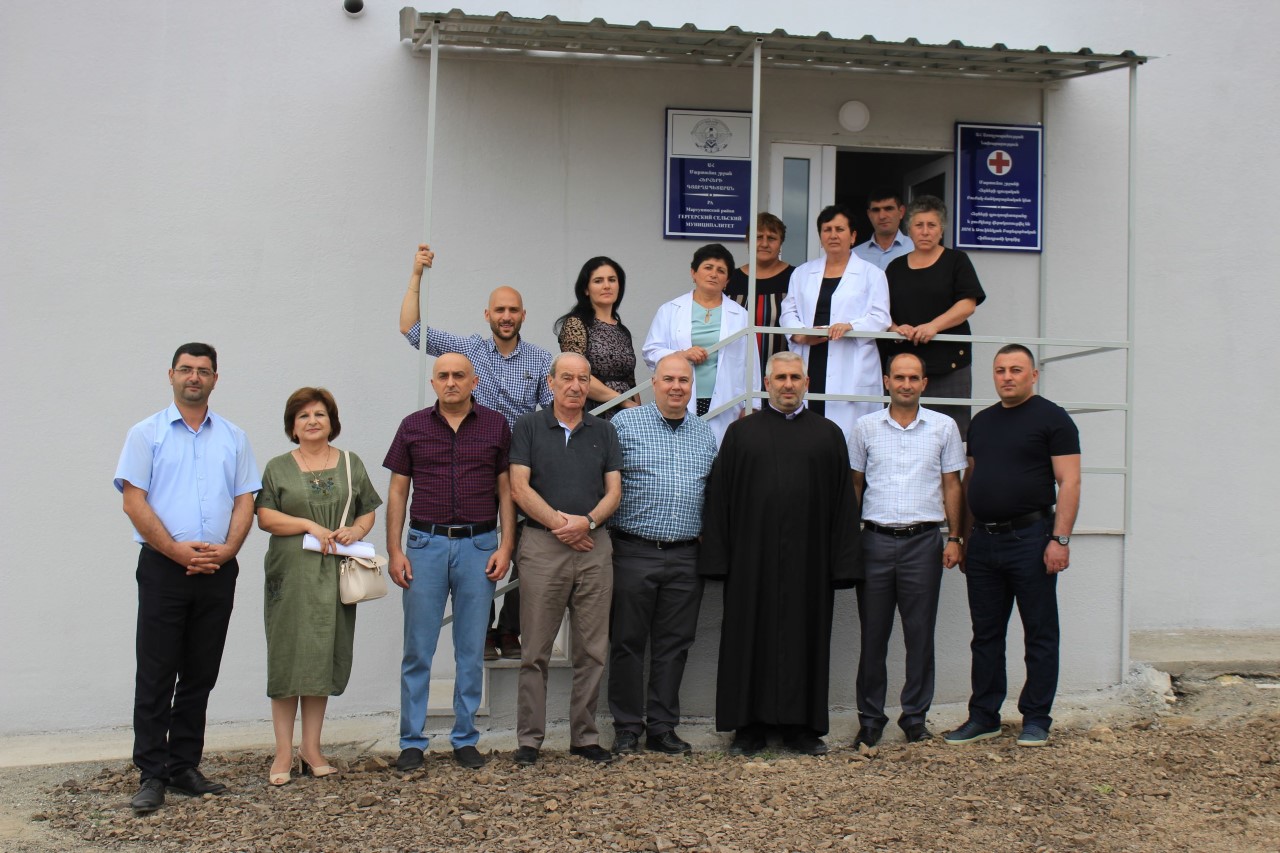 HERHER, Martuni, Artsakh (TUFENKIAN FOUNDATION)—On July 29, the residents of Herher, a village in Artsakh’s Martuni region, celebrated the opening of their new town hall and medical clinic (buzhket), thanks to a recent partnership between the Tufenkian and JHM (John and Hasmik Mgrdichian) Foundations.

“The building that housed the village’s town hall and buzhket was in grim shape; it was nearly impossible to attend to the needs of the village’s residents there. It was evident, especially following the war, that we needed to move operations to a new, more accessible building,” explained Herher’s Mayor Arman Aleksanyan.

The residents of Herher and its surrounding villages came under heavy bombardment during the 44-day war against Azerbaijan late last year.  Earlier this year, thousands of families who had fled the region during the intense battles returned to their homes, many of which had sustained substantial damage.

“After working in Artsakh for nearly two decades, our Foundation learned that relief and development initiatives are most impactful when concentrated in a particular geographical area,” explained Tufenkian Foundation operations director Greg Bedian. “We have assembled an integrated plan composed of complementary initiatives that contribute to meet the educational, health, economic and other needs of a these villages,” Bedian added.  The group of villages is centered around Herher and the adjacent villages of Kherkhan and Tsovategh, and were chosen in consultation with Artsakh’s authorities.  Various aspects of this plan also include the nearby villages of Sos and Machkalashen.

The new town hall and medical clinic was made possible thanks to Tufenkian’s ongoing partnership with the Los Angeles-based JHM Foundation. Established by their namesakes, John and Hasmik Mgrdichian, JHM supports Armenian communities around the world. Father Mkhitar Haroyan of the St. Vardanants Armenian Apostolic Church of Chartar blessed the center during the July 29 opening.

As part of its Herher Village Cluster Restoration and Redevelopment Program, earlier this year, the Tufenkian Foundation announced that it would be launching the Village Healthcare Improvement Initiative. Buzhkets or community medical clinics are often the only places that villagers across Artsakh have access to immediate medical care. “We found that Herher’s buzhket and found that it was in dire need of renovations. After much consideration, we determined that renovating another property would be preferable to restoring the existing building,” explained Tufenkian’s Artsakh project manager Edgar Danielyan.

According to the Head of the Martuni Regional Administration Edik Avanesyan, initiatives like the Herher Village Cluster Restoration and Redevelopment Program inspire hope and faith in the village population. “Through these programs, the people of our villages have faith that their children will live in a safer and more prosperous community,” Avanesyan said.

The Herher Cluster Program addresses the most pressing needs in the region. Throughout the winter, more than 150 families in the three villages received humanitarian assistance packages thanks to a partnership between the Tufenkian Foundation and the Yerevan-based Izmirlian Foundation. Because of the war, many villagers lost their harvests and were unable to adequately prepare their food reserves for the winter.

Immediately following the war, Tufenkian also distributed aid to hundreds of displaced families from Artsakh in Goris and its surrounding villages. As those families began to return to Artsakh, other distributions of humanitarian assistance were carried out in the villages of Machkalashen and Khnushinak, in cooperation with the Lyon-based Mérieux Foundation.

Sixteen homes in the region currently are being renovated and restored by the Tufenkian Foundation and different partner organizations. Over the past few months, five residences that have suffered major damage during the war, as well as the family homes of fallen and wounded soldiers, have been completely renovated and handed over to their owners.

“We have a responsibility to stand by Artsakh and its people. We continue to invest in Artsakh’s often-overlooked villages by rebuilding and renovating homes, clinics, and schools, and implementing targeted development programs. This is how we can ensure a vibrant future for generations of Armenians in the region,” Tufenkian operations director, Greg Bedian commented. 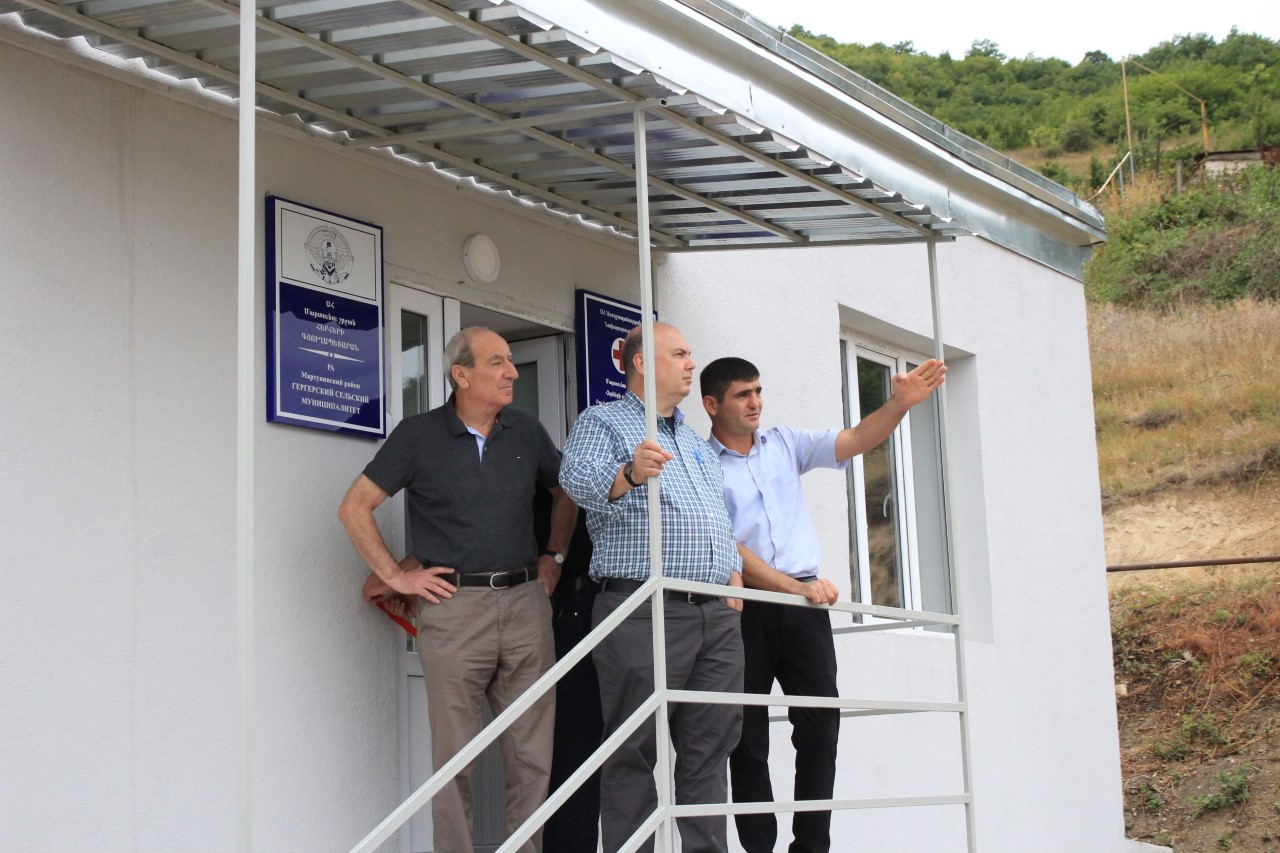 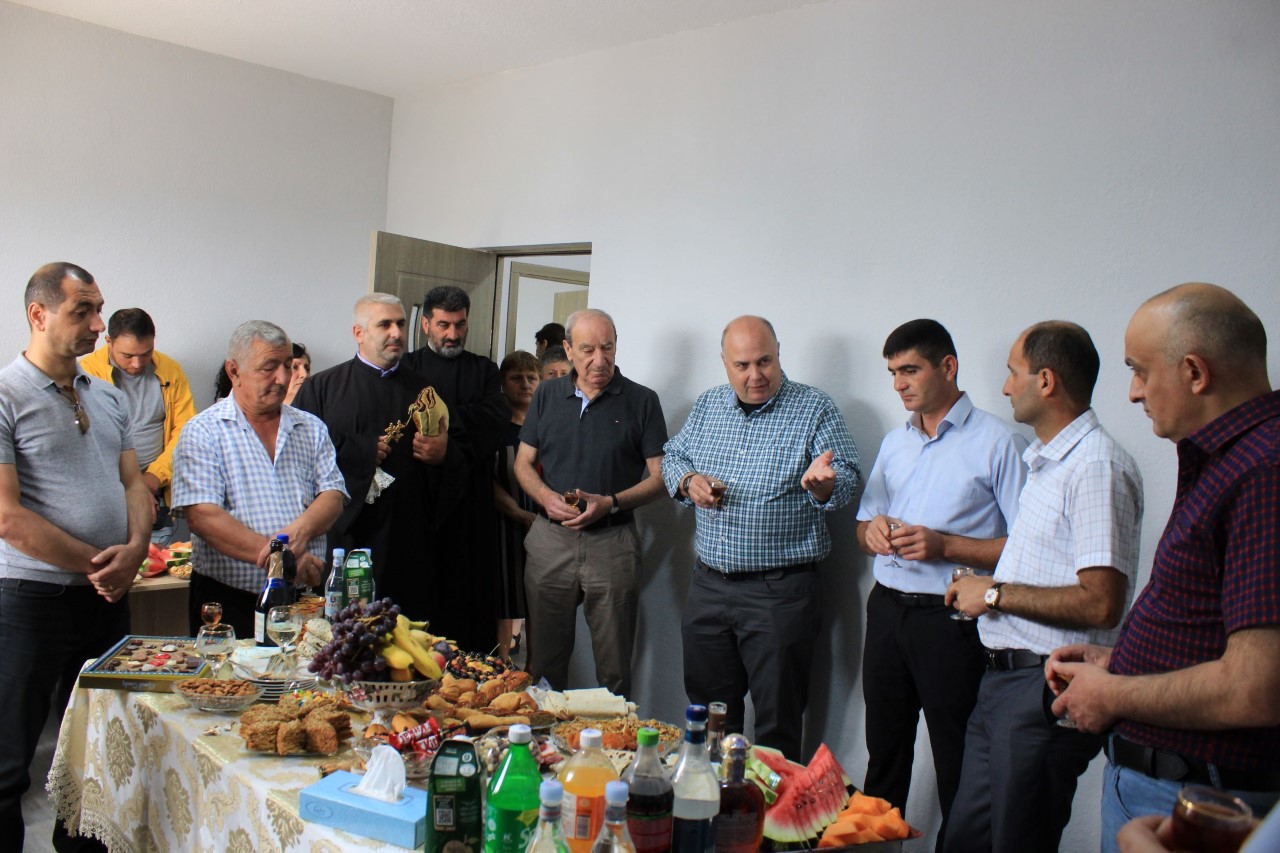 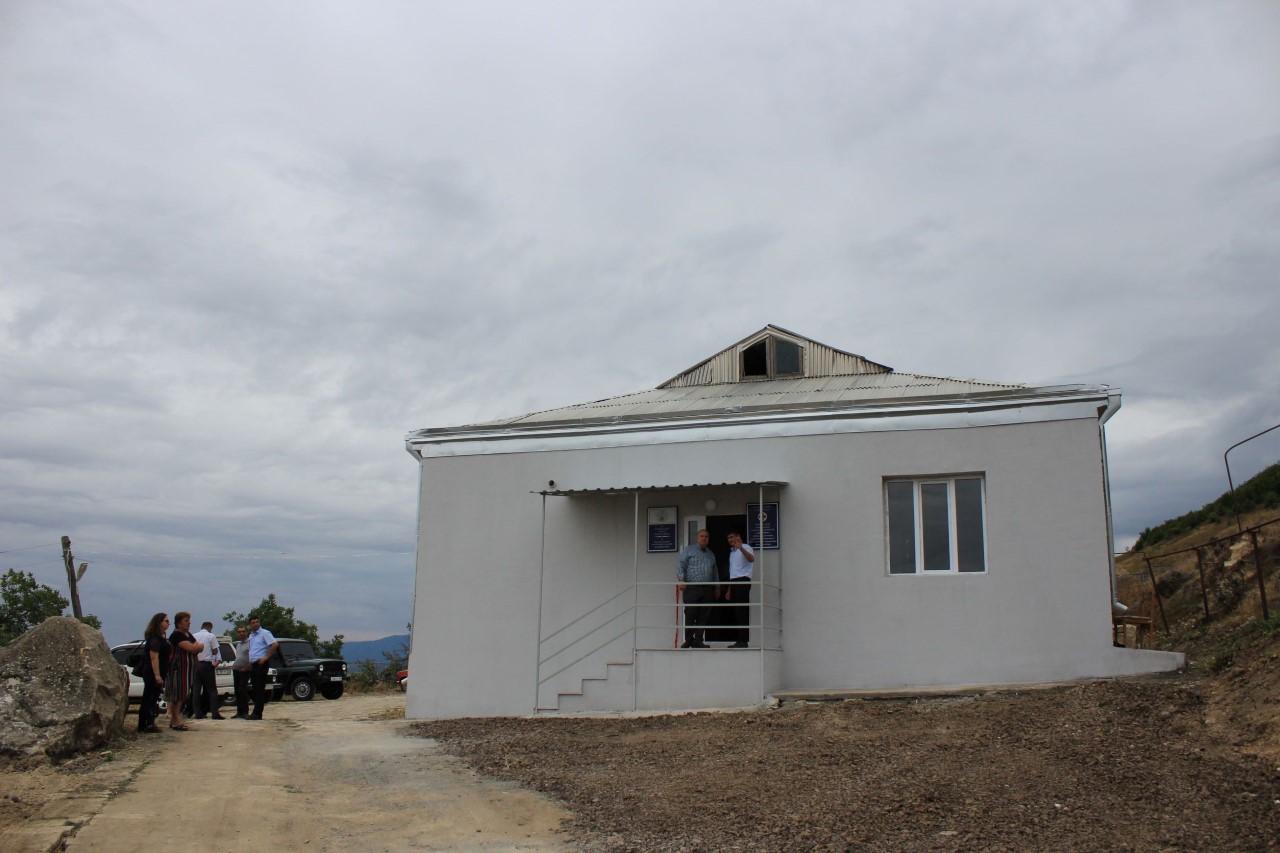 The new town hall and medical clinic was made possible thanks to Tufenkian’s ongoing partnership with the Los Angeles-based JHM Foundation. 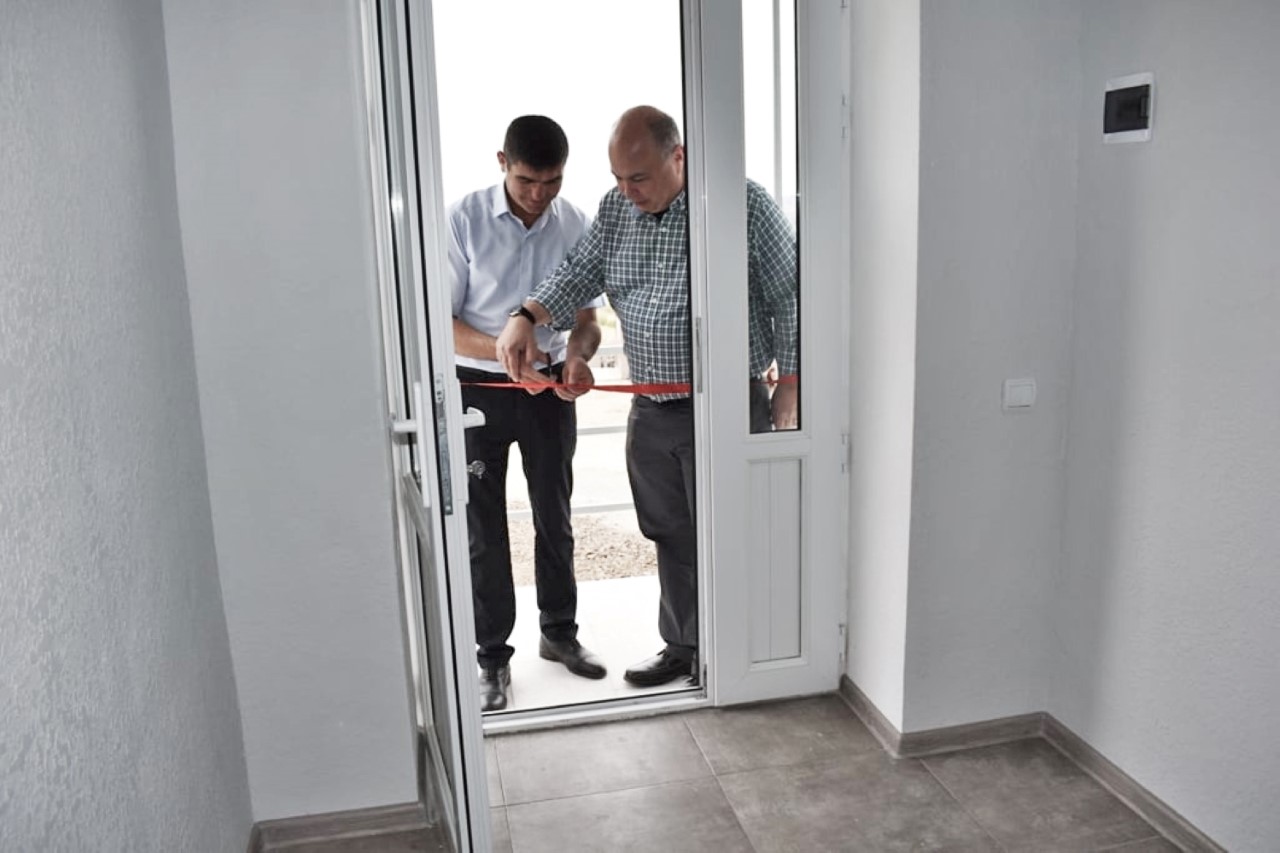 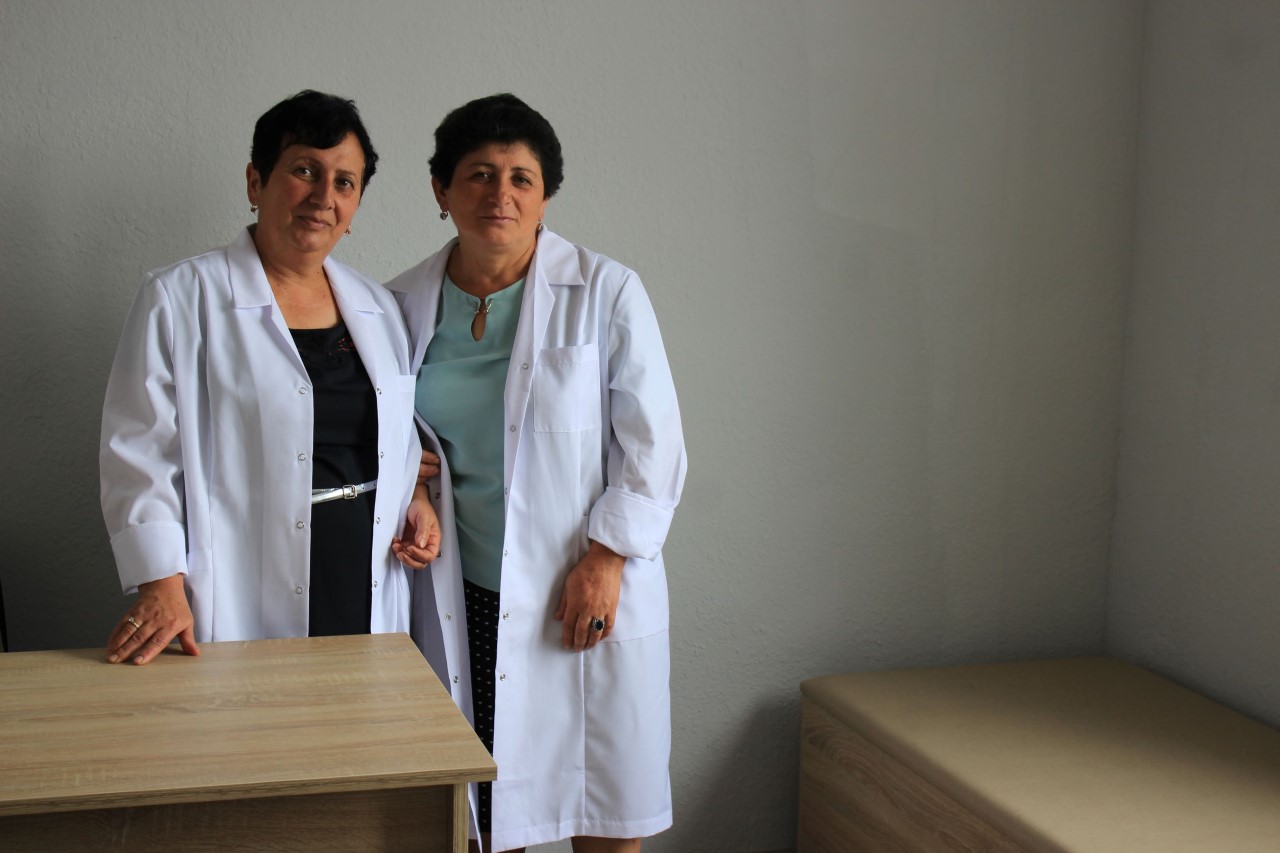 Buzhkets or community medical clinics are often the only places that villagers across Artsakh have access to immediate medical care. Here, Herher’s two nurses are photographed.